Akik pishti is an herbal, mineral preparation in Ayurveda. As the name pishti suggests, it is mainly available in powder (bhasma) form and is used mostly in heart disorders.

Akik – Agate (SiO2) is a semi precious stone. Chemically, it is a combination of silica and oxygen, but may contain manganese, iron, and aluminum in traces. It comes under a crypto crystalline variety of Quartz. The layers may be differently colored or clouded giving rise to several varieties known as banded or clouded Agates. Agates are white, pale to dark brown or bluish in color.

According to the Ayurveda point of view red colored akik is considered to be the best. In Rasashastra it is included in a siktha varga (silicon compounds).

Agate is finely powdered and then it is grinded well with above mentioned herbal juices. This mixture is heated to a great temperature (nearly 3000 degree Celsius) and then allowed to cool. This helps to enhance the quality of akik pishti and removes any impurities if present, making the pishti medicinally valuable and easy to use. The main feature of akik pishti is its good palatability.

Akik pishti is mainly coolant in nature. Hence can be used to balance pitta in the body. It can act as an antacid.

Akik pishti mainly possess sheeta veerya (cold potency) and madhura rasa (slightly sweet in taste). In account to its sheeta veerya it counteracts with aggravated pitta and helps to balance the pitta in the body.

A detailed note on side effects of silicon dioxide is necessary as various rumors on Ayurveda mineral medicine is flourishing nowadays.

Silicon dioxide (SiO2), also known as silica, is a natural compound made of two of the earth’s most abundant materials: silicon (Si) and oxygen (O2).Silicon dioxide are most often recognized in the form of quartz. It’s found naturally in water, plants, animals, and the earth. The earth’s crust is 59 percent silica. It’s even found naturally in the tissues of the human body.

Silicon dioxide is found naturally in many plants, such as :-

Silicon dioxide is also added to many foods and supplements. As a food additive, it serves as an anticaking agent to avoid clumping. In supplements, it’s used to prevent the various powdered ingredients from sticking together.

The U.S. Food and Drug Administration (FDA) have also recognized silicon dioxide as a safe food additive. The European Food Safety Authority does as well.

According to 1974 paper prepared in association with the World Health Organization, the only negative health effects related to silicon dioxide have been caused by silicon deficiency. Although more recent research is needed to bear this out, it seems a lack of silicon dioxide may do more harm than good. 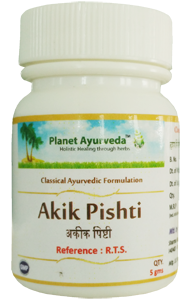 Even though akik pishti is safe for ingestion, care should be taken not to inhale it. Inhalation of the same can lead to silicosis. So those who are working on mine or those who are more exposed to silicon dust should take akik pishti only under the strict supervision of a qualified Ayurveda physician.

Care should be taken not to overdose with medicine. Physician’s direction on dosage should be strictly followed. As the dose may vary according to deha prakruthi, roga and desa of the patient.

Before using Akik Pishti, inform your doctor about your current list of medications, over the counter products (e.g. vitamins, herbal supplements, etc.), allergies, pre-existing diseases, and current health conditions (e.g. pregnancy, upcoming surgery, etc.). Even though no proof for drug interactions with akik pishti is available, it is always better to be on the safe side. Children, pregnant ladies and breast feeding mothers can also take akik pishti but only after a consultation with Ayurveda doctor.

Care should be taken in your diet while having akik pishti. Certain foods act as antagonists and may interact with the medicine leading to decrease of efficiency of the medicine.