Goodpasture Syndrome is a rare disorder but considered as a serious disorder that affects lungs as well as kidneys. It occurs when immune system of the person mistakenly produces antibodies against collagen (protein that helps to form the connective tissue) in the kidneys and lungs.

It mostly affects young men. It can affect the people in the age group of 20 and 30 and the persons older than 60 years.

What are the Causes of Goodpasture Syndrome?

There is no known reason for the cause of this disease. Some researches indicate that it may have a genetic component.

Factors Responsible for Increasing the Risk of Goodpasture Syndrome are :-

What are the Symptoms of Goodpasture Syndrome?

The primary symptoms of Goodpasture Syndrome are :-

The symptom shortness of breath can progress to persistent cough sometimes with blood. Although goodpasture syndrome is the cause of bleeding in the lungs but this does not result in long-term lung damage.

Effect of Goodpasture Syndrome on kidneys

The most serious consequence of Goodpasture syndrome is kidney failure.

Certain tests such as blood tests, chest X-ray can identify lung or kidney damage.Treatment by Modern medicine usually involves the prescription of immunosuppressive drugs as these drugs decrease the immune system’s production of Goodpasture syndrome anti-bodies. This may last several weeks or as long as 2 years.

Although kidney failure is the common complication of goodpasture syndrome, less than 30% of the patients need long-term dialysis.

According to Ayurveda, Goodpasture Syndrome results from the aggravated Pitta Dosha in the body. There are various useful herbs present in Ayurveda that are very useful in dealing with the symptoms of Goodpasture syndrome such as inflammation, auto-antibodies etc.

Varunadi Vati is prepared from the herb Crataeva nirvala. The benefits of Varun have been used by the physicians since ancient times. This herb is very useful in reducing urea and creatinine due to poor functioning of the kidneys. It also helps in curing urinary tract infections (UTI). 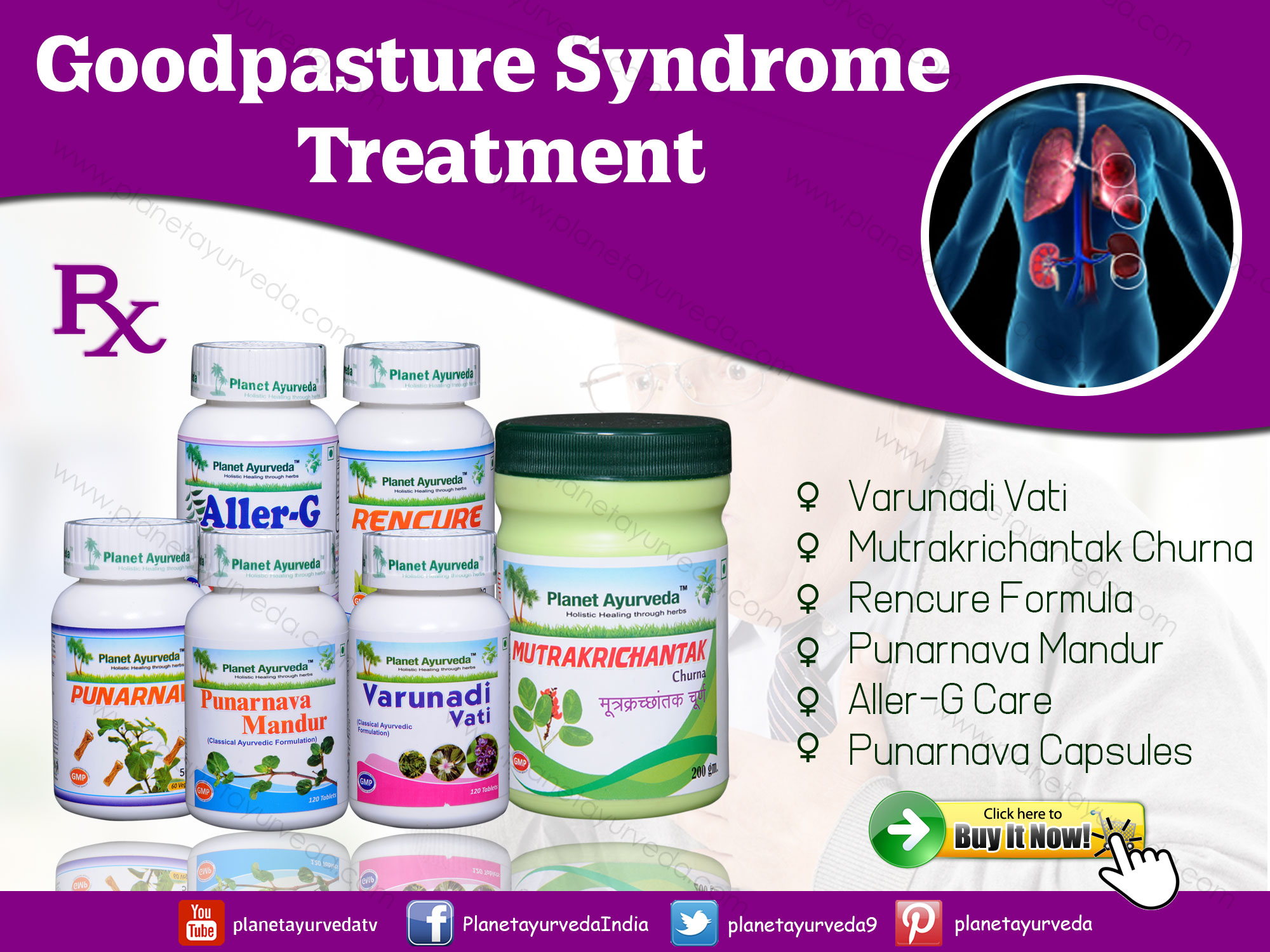 Mutrakrichantak Churna of Planet Ayurveda is a safe and unique combination of herbs which is widely recommended for all kinds of kidney disorders. The herbs used in Mutrakrichantak Churna are used in Ayurveda since 5000 B.C. for various painful urinary conditions as well as inflammation. This powder is also recommended in chronic kidney failure and in dialysis patients. It also acts as a diuretic and also provides anti-oxidants and nutrition to the body.

Herbs used in Mutrakrichantak Churna are:

These are pure herbal capsules which are prepared from various herbal extracts which rejuvenate the dying cells and act as natural cleanser and help the kidneys in eliminating toxins. Rencure Formula is known to reduce the urea levels in the body and also helps in relieving the failing nephrons and regenerates the kidney cells. These capsules are useful for the patients suffering from acute renal failure, dialysis, increased levels of urea and creatinine, nephritis, diabetic nephropathy, nephrotic syndrome etc.

Herbs used in Rencure Formula are :-

Aller-G Care Capsules is a blend of unique herbs that are considered as best anti-allergic and anti-inflammatory herbs. These herbs are best known to improve the immune system as well and provide strength to the lungs as well.

Ingredients of Aller-G Capsules are:

Punarnava Capsules are prepared from the herb Boerhavia diffusa. The word “Punar” means “Again” and “Nava” means “New”. So, this herb rejuvenates the cells rather than only eliminating water from the body. These capsules are very useful in the treatment of edema and water retention and also reduces swelling and inflammation in a natural way. It also possesses diuretic properties and also helps to maintain efficient kidney function and also supports the body’s ability to remove fluids. It also helps in water retention caused due to kidney failure.