Dermatitis herpetiformis is a skin disease that is autoimmune in nature and usually linked to the celiac disease. It is an uncommon condition which instead of being linked to the celiac disease, do not affect all the people suffering from it, DH is rare in occurrence as compared to the former. Any age group can be affected by DH but the most common one are between 15-40 years of age. Men are more prone to it as compared to the women and children seem to be rarely affected by this disease. In this article we will be learning all about Dermatitis herpetiformis in detail, its signs and symptoms, causes, diagnosis and herbal management by the herbal formulations offered by Planet Ayurveda. 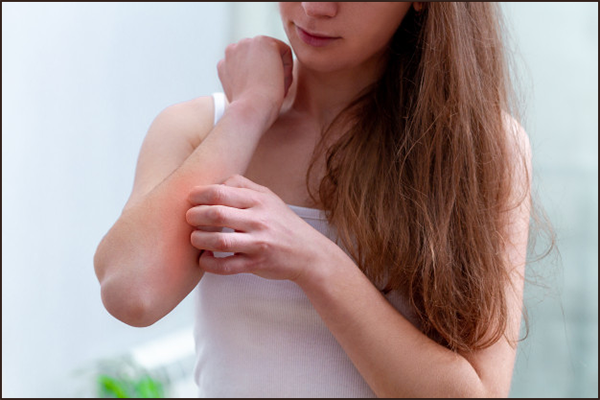 Dermatitis herpetiformis, a skin condition is characterized by burning and itchy rashes on skin, and painful blister formation. People suffering from it find it very difficult to live through it due to the agony this disease causes. DH can affect any area of the body but some of the commonly affected are knees, elbows, back, and scalp, back of neck, shoulders, and hips. Gluten intolerance is the cause of these rashes and usually the underlying celiac disease is always present in it.

Dermatitis herpetiformis comes under the category of one of the itchiest rashes possible. Both sides of the body are equally affected by the rashes which appear and disappear on and off. Some of the signs and symptoms commonly observed in DH patients are:

Name can be deceptive in case of DH are it may sounds like involvement of herpes virus in causation which is wrong. Dermatitis herpetiformis is caused due to the abnormal reaction of the immune system of the body against gluten which results in this skin disease. Hence people suffering from celiac disease get affected by it as there is intolerance to gluten in celiac disease. Rye, wheat and barley consist of this protein called gluten.

The best confirmative diagnostic procedure for Dermatitis herpetiformis is skin biopsy. In this test a small piece of the skin is taken from the affected area and examined under the microscope. This test reveals the IgA antibody presence in that area and helps in ruling out other causes of rashes on the skin. Certain blood tests can be done to check the presence of antibodies in it and intestinal biopsy will reveal the damaged colon due to celiac disease.

The main drug used to treat Dermatitis herpetiformis is dapsone which is a very strong medicine with several serious side effects and negative interactions with other medicines. Dapsone must be used very carefully and low dosage otherwise can lead to severe damage like liver ailments, weakness of muscles, anemia, photosensitivity, and peripheral neuropathy.

On the other hand Ayurveda can help in a very natural and healing way, without causing any harm to the body. As per Ayurvedic literatures, autoimmune diseases are caused due to the accumulation of ‘Ama’ (endotoxin) on certain cells which are eventually targeted by the immune system and destroys them. Hence the main aim of Ayurvedic medicines is to clear this ama from the body and prevent its further formation. This will lead to vanishing away of cause and simultaneously the disease caused due to it.

Planet Ayurveda, a herbal pharmaceutical brand which is indulge in the manufacture of herbal medicines, supplements and products. No any sort of chemicals, additives, preservatives, colors, dye, fillers or yeast is used in these herbal products which make them all more safe and effective for the people to use. For Dermatitis herpetiformis Planet Ayurveda offers a range of herbal combinations that helps in eliminating the ama from the body and managing the signs and symptoms of the disease.

It is prepared from the Purified sulphur (Shuddh gandhak). Gandhak rasayan relieves the itching, burning and irritation on the skin. These tablets eliminate the toxins from the blood, purify it and maintain healthy skin.

Direction– Take some drops of oil and apply on the affected area with cotton.

Tea tree aloe vera soap is manufactured according to the ancient Ayurvedic literature, which possesses several medicinal properties. Regular use of this soap helps in relieving the irritated, skin that burns and itch severely due to the disease. This soap gives a soothing and healing effect on the blisters.

Direction– Use daily for washing the area.

As the name suggests this oil is prepared from Neem (Azadirachta indica) which have multiple medicinal properties like antibacterial, antifungal, healing, purifier, detoxifier and soother. All of them help in relieving the complaints of Dermatitis herpetiformis.

Direction– Take some drops of oil and apply on the affected area by cotton.

Dermatitis herpetiformis can be troubling and severe to the top of the notch which can make a person’s daily life miserable due to the severity of the itching and burning caused in the blisters and affected area. Modern medicine possesses many side effects as already mentioned in the case of DH but Ayurveda helps in treating the condition naturally and safely without hurting any other part of the body.