Wiskott Aldrich syndrome is a genetic disorder that leads to decreased blood clotting ability and immunological deficiency. Wiskott Aldrich syndrome also known as WAS is caused due to genetic mutation in a specific WAS genes which mainly affects males. This disorder is inherited in an X-linked manner that is known to have a good prognosis with passing time due to improved methods of treatment and technology. As there is a reduction in blood clotting ability of the body hence the signs and symptoms which observed are related to it like the decreased number of platelets causing easy bruising and bleeding, due to low immunity person is more prone to infections and inflammatory disorders, also the risk of cancer like lymphomas are increased. Let us learn all about WAS disease, its signs and symptoms, causes, diagnosis, and herbal management of Wiskott Aldrich disease by Planet Ayurveda’s herbal formulations. 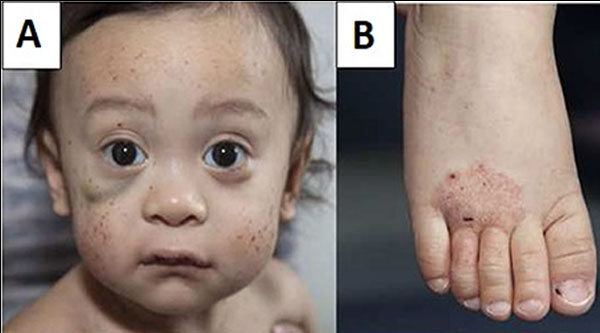 As it is inherited in the X-linked recessive pattern, so the males are more prone to the disease as compared to the females however the disorder in itself is rare in occurrence. Some of the major complaints seen in affected people are:

WAS is inherited diseases through X-linked manner which occurs due to mutation in the WAS gene resulting in reduction in blood clotting ability and deficient immunity. Males are predominantly affected because they have only one X chromosome unlike females who have two so if one is affected the other healthy one can carry out the functions well. However this make females carrier of the disease so they can pass it to their children.

Clinical presentation of the patient is the base of diagnosing the WAS disease which shows low platelets, count, mentioned ailments due to it and low levels of immunoglobulins. Family history is not found in all the cases as new mutations can occur. Bone marrow biopsy is done to rule out leukemia which is suspected due to the low platelet count and accompanied infections. The confirmation diagnostic test for WAS can be DNA sequence analysis which reveals the mutated genes and WAS disease.

In modern medicine the only method to cure this Wiskott Aldrich Syndrome is hematopoietic cell transplantation. However that can be way too costly and out of reach for many of the people. However you can manage this rare inherited disease by herbs and minerals formulations used in Ayurvedic system of medicine. Ayurveda can help in managing the Wiskott Aldrich Syndrome in a very natural method that even if used for long term do not causes any harm to the body and also convenient and within reach of everyone.

There are certain herbal formulations which Planet Ayurveda offers to Manage Wiskott Aldrich Syndrome with Herbal Remedues. All these herbal formulations are free from chemicals, preservatives, colors, dye, fillers, additives and yeast and are purely vegetarian, natural and herbal. All the mentioned points make these herbo-mineral medications much more effective and safer than the other similar products present in the market. Planet Ayurveda has been serving the suffering people for more than a decade. 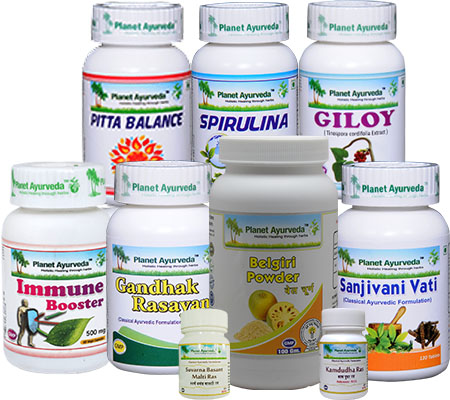 Gandhak rasayan is prepared from the Purified sulphur (Shuddh gandhak). These herbal tablets help to treat the skin ailments like eczema, impetigo, inflamed and irritated skin. It clears the toxins from the blood and give healthy skin.

The main constituents of these capsules are Cow colostrums (Bovine colustrum), Bhumi amla (Phyllanthus niruri) Grape seed (Vitis vinifera), and Amalaki (Emblica officinalis). In WAS Immune booster capsules help to enhance the immunity and prevent disease caused due to lack of it.

Kamdudha ras is an Ayurvedic mineral formulation which works to maintain balance of Pitta dosha. Bleeding problems in WAS can be treated and managed effectively with these natural tablets. Kamdudha ras is prepared from Giloy (Tinospora cordifolia), Abhraka Bhashma (Mica bhasma), Shankh Bhashma (Conch bhasma), and Mukta bhasma (Pearl Calcium).

Aegle marmelos is the main component of this herbal churna called Belgiri churna. It possesses all the qualities to maintain a healthy digestion and helps to treat the digestive ailment like diarrhes in WAS. Belgiri churna also possesses many nutritional properties that strengthen the digestive system of a person.

The standardized extract of the Tinospora cordifolia is used to prepare the amazing herbal Giloy capsules. These capsules are packed with many medicinal properties like enhances the platelets, boosts up the immunity, prevent the infections and autoimmune diseases which tends to occur in WAS.

Wiskott Aldrich syndrome can be managed effectively with the mentioned herbal medicines as they consist of the effective herbs and minerals that possesses the abilities to manage genetic conditions like WAS. Ayurveda can be your safe and effective choice for managing the disorder that too in affordable limits.