Bullous pemphigoid is an autoimmune disorder that affects the skin and presented by subepidermal blisters. It usually affects people above 60 years of age however occurrence in young adults has also be reported. In infants and children, this disease is rare. The person affected with Bullous pemphigoid presents with blisters on legs, arms, mouth, groin, or abdomen. Both males and females are equally affected by this disorder.

Bullous pemphigoid causes many skin complaints like characteristic fluid-filled blister, itch, and hives which gets large gradually. It can be either widespread or may affect only a small part of the body. Flexible areas of the skin are usually covered with the blisters like the abdomen and armpits. Even in severe cases, blisters might be present in the throat, mouth, or esophagus, along with the skin. Usually, the signs and symptoms in these disorders keep on appearing and disappearing.

Bullous pemphigoid is known to have a genetic predisposition due to the presence of HLA (Human leukocyte antigen). Elderly people having dementia, stroke, Parkinson’s disease or other neurological diseases are more disposed to have Bullous pemphigoid. People who are having Psoriasis are at increased risk of getting this disorder and especially triggered by the treatment of Psoriasis like phototherapy. Also, the presence of malignant diseases makes a person more prone to this autoimmune disorder. Any injury, drug, or infection of the skin triggers the disease. 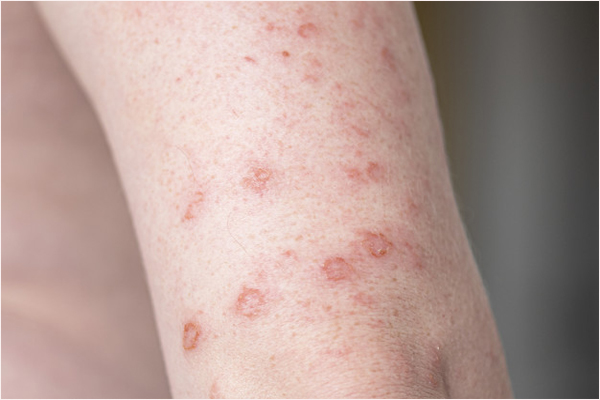 As Bullous pemphigoid is an autoimmune disorder which means it occur when immune system of one’s own body start attacking the skin, particularly subepidermal layer causing formation of blisters and other symptoms. Abnormal immune activities occur when activated white blood cells attack the target proteins. These autoantibodies get bound to the proteins releasing cytokines and proteolytic enzymes which destroy the hemidesmosomes and result in formation of subepidermal blister. However, the exact cause of this attack is not known but there are certain factors which are known to be associated with the disease like intake of certain drugs, history of psoriasis or any malignancy in the person. History of Penicillamine is usually found in these patients.

Bullous pemohigoid usually presents with the characteristic blisters, hives like welts, and severe itching. These blisters are very big as compared to the regular one and are filled with fluid. Their location is specific to certain areas, especially the creases of skin like armpits, abdomen, arms, legs, mouth, throat, groin and sometimes even esophagus is affected. These fluid filled blisters break and open to form big sores or ulcers. The fluid inside them is usually clear but may be blood filled as well. Blister affected area and the surrounding area is inflamed and red. Initially there appears rash before the formation of blisters which converts into eczematous areas. In the healed areas there appear milia.

Bullous pemphigoid when is present in the widespread form or non-responding to the treatment can be very serious and increases the rate of mortality. Some of the serious complications which can occur in such patients are bacterial infections and sepsis, viral infections like varicella or herpes.

The bullae in its own form are one of the most marked diagnostic feature when present on the specific sites which are mentioned. Blood tests and biopsy can be done to confirm the diagnosis of the disorder.

Corticosteroids are the main line of treatment in the modern medicine system. These can be given orally and for topical application. In mild cases, even some anti-inflammatory drugs and antibiotics can be used. Immunosuppressants are used in severe cases. However, these corticosteroids when used for the long term may have many side effects like weight gain, diabetes mellitus, high blood pressure, indigestion, etc.

In this case, Ayurveda can help you manage the disorder naturally and that too without side effects even if taken for the long term. Ayurveda is the ancient science in which herbs and natural methods are used to treat the condition. 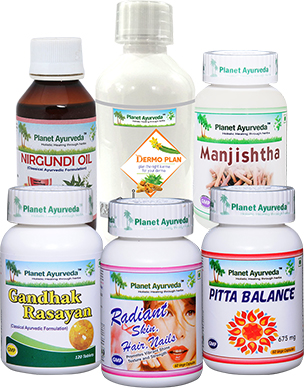 Planet Ayurveda is a well-known herbal pharmaceutical company that offers the treatment for various diseases in the form of herbal medicines prepared by herbs and other natural substances. The herbs used in the products are of the best quality and pure and all the products are prepared as per the authentic Ayurvedic literature and under the strict supervision of the MD Ayurveda doctors. These herbal medicines do not possess any sort of chemical substances like colors, fillers, binders, additives, etc. For Bullous pemphigoid also Planet Ayurveda offers a set of herbal formulations to manage and treat the condition in a most natural way.

These are the single herb capsules prepared from Rubia cordifolia that is filled with amazing therapeutic properties. Manjishtha capsules possesses anti-inflammatory, anti-bacterial, anti-viral and soothing properties that helps in healing the blisters and overall skin.

These polyherbal capsules are prepared from the standardized extract of Manjishtha, Pitt papda, Chirata, and Ghrit kumari. These capsules clear blood relieves inflammation and helps to treat various other skin ailments as well.

This herbal syrup is prepared from Manjishtha, Giloy, Chopchini, Sariva, Neem, Haridra, Shobhanjan, Khadir, Gorakhmundi and Shahtara. Consumption of this syrup help in treating all kind of skin related ailments owing to the anti-inflammatory and anti-bacterial properties it possesses.

As the name implies these herbal capsules are made to balance Pitta dosha in the body that is imbalanced in this infection. It comprises of various pishti like Praval pishti, Mukta pishti, Akik pishti, Jawar mohra pishti, Giloy satva and Kamdudha ras. All the synergistically help to balance the aggravated Pitta dosha.

Bullous pemphigoid being a serious skin disorder can be managed and treated effectively with herbal medicines and these medicines do not pose any health concern even if taken for the long term.

← Natural Treatment of Sideroblastic Anemia
How to Treat Acne Scars with Ayurvedic Medicines? →