Pyoderma gangrenosum does sound fancy. But what exactly is this??

This is a chronic recurrent skin disorder characterized by frequent eruption of small red blisters which later join together to form large sores and then ulcers. The legs are the common site for its formation, especially in the shins and ankles. It is also often seen around surgical sites. The lesions may be a few to many depending on the extent of chronicity of the disease. Most often many other systemic disturbances are seen associated with the lesions. Certain surveys suggest that the condition is prevalent in more women than men and much rare in children. The exact cause for the formation of this disorder is unknown to modern science, but some researchers do believe that it may be due to some autoimmune trigger after the skin has been affected with sime trauma. This condition is not infectious or contagious.

On a deeper peep

While pyoderma gangrenosum is mostly seen in the shin, it can occur in any part of the body. After the legs, the most affected regions are the arms, neck and genitals. It begins as a small red pus filled pustule ( blister), resembling a spider bite, that later spreads. They often swell into blue or violet colored lesions. They are large, deep and associated with pain. Other Than these classical symptoms, certain individuals also tend to have fever, tenderness around the rash, associated joint pain and may experience general debility. This specific condition is difficult to diagnose so diseases with the same background like infections, inflammation of blood vessels and skin cancers can be ruled out. Biopsy, bone marrow sampling and examination of the rectum for probable infections are the diagnostic criteria used in this disease.

Early diagnosis and treatment is necessary to not leave unpleasant scars to the patient. The treatment decision for pyoderma gangrenosum depends on the severity of the skin lesions. For milder conditions topical applications and oral medications are prescribed while for more chronic and vast lesions immunosuppressive agents and even skin grafts are advised. Scarring, depression, superficial infections and mood fluctuations are generally seen as the compilation of this disease. Like any other snag, prevention is always better than cure. As the exact cause is unknown, the condition can be prevented by preventing taruma, or any injury to the skin including surgery as it can provoke newer ulcers. 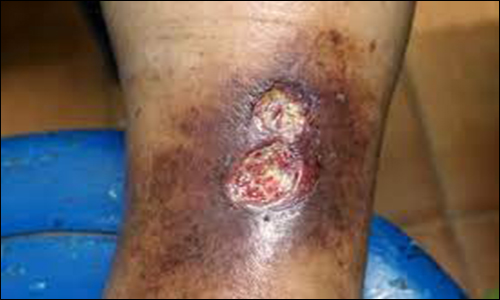 Ayurveda, one of the oldest sciences known to mankind, understands disease as the wavering in the odily entities of Vata, Pitta and Kapha. All manifestations of the body occur due to abnormal patterns seen in them. Being a much older science, the exact correlation to certain modern diseases might not be available in ayurveda, but the condition is assessed and treated with the predominance it shows with the bodily entities. According to ayurveda all skin lesions or obstinate skin disorders are all coined under the umbrella term Kustam. Pyoderma gangrenosum may be correlated with Raktaja Vruna or lesions caused due to vitiated Rakta Dhatu (blood tissue element) with the support of a vitiated Pitta entity.

Generally the treatment for lesions is decided based on the predominance of Dosha ( the involved entity), Dhatu (tissue elements participating) and the Srothus ( Micro and macro channels of circulation of these tissue elements) involved while also assessing the health status of the individual. In pyoderma gangrenosum the condition shows an upsurge in the Pitta and Kapha entities along with Pittaj symptoms. Tissue elements of Rakta and Ras, the first two in the successive tissue formation chart, also seem to be vitiated, with the disease taking the Rakta Vaha srotas (micro and macro channel for circulation of blood) as the base for formation of the disease. The treatment can involve detox procedures according to the chronicity and strength of the individual with local topical applications and oral medications.

According to the theories of disease formation in ayurveda, a Pita predominant skin lesion occurs due to excessive consumption of hot, spicy, tangy, acidic and sour foods along with the consumption of food in unwholesome combinations before the previously ingested meal has been digested. Avoiding such mesla and practising timely intake of the right meal is the most suitable way to prevent this condition.

PLANET AYURVEDA FOR YOUR SUPPORT

Planet ayurveda has come up with effective formulations that will help you overcome your snags relating to pyoderma gangrenosum. These include: 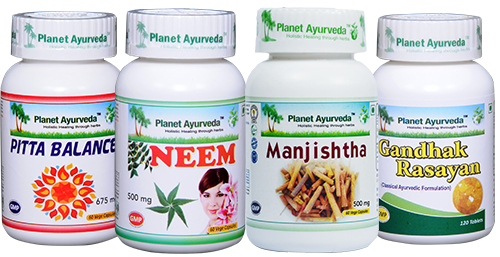 Purified sulphur is the best medication used for the treatment of many skin lesions. This wondrous combination mentioned in Rasa Ratna Samuccaya helps to maintain healthy skin, while normalising the Pitta entity.

Dosage– It is advised to consume 2 tablets twice daily after meals or as directed by your Ayurvedic physician. NOTE: this medicine should only be consumed under medical supervision.

This combination made from the incinerated powders of various members of Sudha Varga (calcium containing compounds) all have cold potency with sweet metabolic end effect helps to lower the sureg in Pitta entity and reduce the symptom of the disease.

Dosage– It is advised to consume 1capsule twice daily or as directed by your ayurvedic physician.

The extract of one of the most used herbs in Ayurveda Rubia cordifolia has the best blood purifying properties with the ability to optimise skin cells. This same property of this plan helps to lower the levels of Pitta entity with added skin colouring abilities. It’s hot potency with astringent flavour also subsides the Kpaha entity involved in this skin lesion.

Dosage– It is advised to consume 1capsule twice daily after meals or as directed by your ayurvedic physician.

The Neem or Arazdiractah indica is the best herb that has wound healing ability with added antimicrobial effect. The oil extract from the leaves of neem has wonderful action in many skin disorders including acne, eczema, psoriasis and others.

Dosage-It is advised to consume 2 capsules twice daily or as directed by your ayurvedic physician for better results.

Pyoderma gangrenosum is a disease with idiopathic etiology in the modern world, while ayurveda has its own ways to diagnose and cure the disease. While during the treatment the food and regimen of an individual is of prime importance, the same vitality in the food and regimen helps the body to prevent and protect itself from any other disease. Following the path of ayurveda in your life will surely fruit you with benefits.