The increased prevalence of parasitic diseases is associated with the poor sanitary conditions. Parasitic disease affects the larger population of the world as it occurs at rapid spurt. There are more than 3000 kinds of parasites that have been identified. Such a water borne parasitic disease is Giardiasis. In this article we are going to discuss the giardiasis, along with a brief in its causes and clinical features and the choice of drugs used for the treatment of Giardiasis in both Allopathic and Ayurvedic medicine. 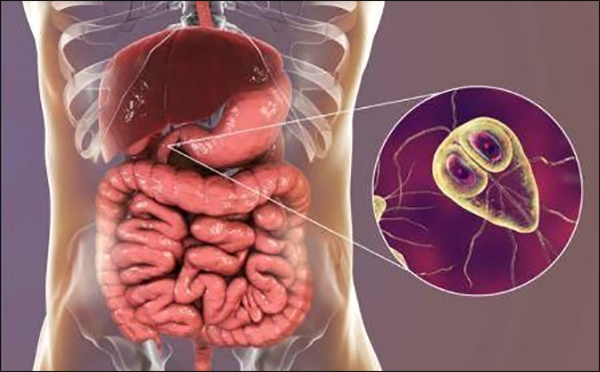 Giardiasis is an infectious condition caused by the parasite named as Giardia lamblia. This parasite usually enters in the system through the intake of unhygienic dietary habits and contaminated water. Giardiasis is one of the most common waterborne diseases. The disease is characterized by abdominal cramps, bloating, nausea, watery diarrhea, and weight loss. Whereas in a few cases, the patients don’t develop any symptoms for many days even after getting this parasitic infection.

The main causes of the disease is the parasitic infection by the Giardia lamblia parasite. And this parasite got into the body of the person through the recurrent consumption of contaminated food and water, or from the physical contact of the infected person if the person’s hands are contaminated with the parasite through his fecal matter. The transmission of giradiasis also take through the anal sex. The workers of nursing homes, parents of children who regularly in touch or changing the diapers, people who swims in rivers, drinking contaminated water from well, person with impared immune system, and already having some other complication like cystic fibrosis, crohn’s disease, or other disease which affects the digestive system.

The clinical manifestations of the disease include the fatigue, watery and foul-smelling diarrhea that may have greasy and soft stools in an alternate manner. Gas accumulation, abdominal bloating and stomach cramps are also common. Weight loss is also found in the patients of Giardiasis. The disease persists for a longer duration and it may not be a fatal condition but it can lead up into complications such as lactose intolerance, failure to thrive, dehydration.

In Ayurveda, the supreme digestive fire i.e., jatharagni is responsible for the maintenance of the digestion process and pacification of the toxins. The Jataharagni in normal state plays a main role in restricting the accumulation of metabolites (free radicals and endotoxins). But due to disturbed personal hygiene or overconsumption of contaminated food and water may lead to the weakening of the digestive fire which results in the undigested food which promotes the formation of ama (endotoxins), which provide the adequate environment for the various harmful parasites to reside in the abdomen and manifest the features of Krimi roga (Giardiasis).

Tinidazole and Metronidazole are the choice of drugs used for the treatment of Giardiasis in allopathic mode of treatment. Both of these medicines belong to the group of antibiotic and anti-protozoan medications.

Side Effects of these both Allopathic medicines include indigestion, dizziness, metallic taste of the mouth of the patient which results in the impairment of the taste, constipation, fatigue and low energy, reduced appetite, headache and nausea and darkness in the urine of the patient. These are the commonest side effects, further the regular use of these medications can lead to the death of healthy gut flora along with digestion which result in the chronic digestion related issues.

The main aim of treatment is to restrict the formation of these ama (non- processed metabolites) that is leading to the pain and other manifestations in Giardiasis and make the environment of the belly unsuitable for the survival of these harmful parasites. In Ayurveda, Mahashankh vati and Sanjivani Vati are the choice of drugs for the treatment of Krimi roga.

Planet ayurveda is the herbal manufacturing unit that formulates the herbal/herbomineral medicines with strict adherence to ayurvedic texts and principles. The formulations made here are obtained from 100% natural sources and are being made with ancient time tested formulas.

There are several herbal formulations indicated to treat the krimi roga, out of which Sanjivani vati, Mahashankh Vati and Wormistop Capsule are having better results than tinidazole and metronidazole. These three formulations are made up of multiple herbs and few detoxified minerals obtained from natural sources. Herbal remedies are being suggested by Planet Ayurveda’s experts for the treatment of Giardiasis. Let’s discuss the ingredients, benefits and therapeutic uses of these three formulations in detail- 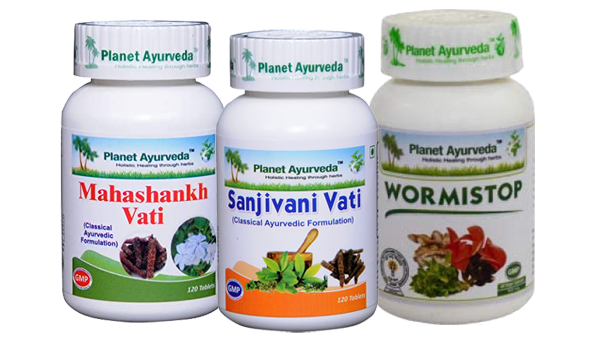 Mahashankh Vati is the best Ayurvedic remedy for the various abdominal discomfort such as indigestion, abdominal bloating and pain in abdomen etc. The herbs present as ingredients in these formulations have multiple properties like analgesic, appetizer, antipyretic, and anti-rheumatic etc.

It has been also indicated in a variety of ailments including the indigestion, malabsorption, abdominal pain, piles, acidity, bloating, irritable bowel syndrome, dyspepsia, and other worm infestations. This tablet maintains the adequate balance of tridosha by pacifying the aggravated vata and pitta dosha. It possesses stomachic, carminative, and digestive properties which makes it the perfect medication to be used in the treatment of Giardiasis.

Sanjivani Vati is the classical polyherbal formulation used for treating the parasitic infestation and other digestive system related disorders. The ingredients of this formulation include Vidanga (Embelia ribes), Pippali (Piper longum), Amalaki (Emblica officinalis), Haritaki (Terminalia chebula), Ginger (Zingiber officinale), Vacha (Acorus Calamus), Shuddh Bhallataka (Purified form of Semecarpus anacardium), Shuddha Vatasnabh (purified form of Aconitum ferox) and Guduchi (Tinospora cordifolia) like herbs. Sanjivani Vati is the ancient formulation that helps in the ignition of the digestive fire and help in the elimination of the accumulated toxins out of the system to provide the abdomen a healthy environment. The ingredients of this formulation having properties like-

As, already discussed tinidazole and metronidazole are the Allopathic most popular drugs for the treatment of Giardiasis but the series of side effects can be arisen from the regular consumption of those medications whereas with Ayurveda, along with slight modifications in dietary regimen and lifestyle, the regular use of herbal formulation is the best way to treat giardiasis and making the digestive health also good side by side and that too with relatively lesser side effects.