Healthy Sexual Life According to Ayurveda

Sexual life is a field that requires utmost attention and which should be a topic of discussion in these times. A healthy sexual life can play a pivotal role in the overall health and development of an individual. Ayurveda advises certain rules and routines for each and every aspect of life as it ultimately aims for a healthy and happy living. For sexual behaviours too, this has been enlisted under various contexts. So now let us see how Ayurveda can bring charm to a doomed sexual life. 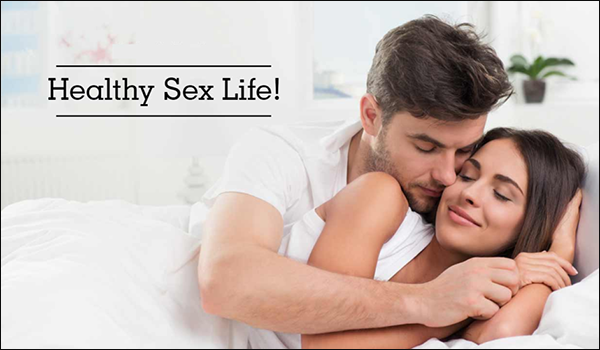 Brahmacharya or celibacy is considered to be one among the three sub-pillars (upasthambhas) of life, Aahara (food) and Nidra (sleep) being the other two. While considering the different phases of life, it is preferable to follow complete celibacy up to the teenage period. Following this will enhance memory and concentration which is a must-have during this phase. It is due to the fact that sukra (semen) is considered to be ojas as well and preserving it will improve the quality of life. This does not mean that sexual urge should be suppressed. But the mind should be positively deviated such that there is no need for suppression.

Sexual Relationship According to Seasons

Another set of rules holds good as we enter into a phase of active relationship with a partner (Grihasthasrama or married life). Ayurveda suggests to bring changes to the frequency of sexual acts in accordance with seasons. Susruta Samhita opines to indulge in sexual intercourse with a gap of at least three days in all seasons except summer. In summer it should be restricted i.e., once in 15 days. This is due to the weakened body strength during summers. On the other hand, winters are said to be the ideal time for sexual intimacy. Daily sexual practices are also suggested by certain Ayurvedic scholars in this season. At the same time, it should be noted that mutual feelings from partners is what matters the most. It should be done only when both are inclined towards sex. Having said that, post-marital celibacy should be opted whenever possible by having control over the senses and not by suppression. Especially during menstruation and pregnancy, celibacy is mandatory.

It is not a good idea to approach the partner when there is an upsurge of hunger or thirst and also definitely not after a heavy meal. Simply it means that the body and mind should be in moderation before going to bed with the partner. Neglecting this reduces the sexual pleasure and weakens the intimacy of relationships. Moreover, it may lead to various sexual disorders in the long run.

Natural urges, especially that of urine and stools should not be subdued while making love. Ayurveda enumerates certain sexual impairment problems mainly due to vata aggravation, when acted upon so.

Proper body hygiene should be maintained prior and post the sexual act. Ayurveda prioritizes sexual hygiene by persuading to take a bath, applying sandalwood paste (for good smell and coolness), wearing of good clothes, having beautiful bed etc. This further highlights the importance of a pleasant mind and body while making love.

Decoction of Triphala powder, neem leaves (Azadirachta indica), Aragwadha (Cassia fistula) bark etc can be used for washing private parts when there is any itching, inflammation or any discomforts.

A good shower, clean and pleasant atmosphere and a lovable partner itself can act as natural aphrodisiacs. Ayurveda covers a horde of drugs under the context of Vajikarana and Rasayana which works wonders in promoting sexual health. To mention a few, Ashwagandha (Withania Somnifera), Musli (Chlorophytum borivilianum), Shatavari (Asparagus racemosus), Shilajith (Black bitumen) etc are the commonly used ones.

Ghee, milk, red rice, meat soup, barley, wheat etc are nourishing to the semen. These can be included in the diet generally for any seminal morbidities.

Below mentioned are the Ayurvedic products from Planet Ayurveda which has already proved its excellence in Ayurvedic health. These formulations can energise your sexual potential and act as a remedy for several sexual disorders. 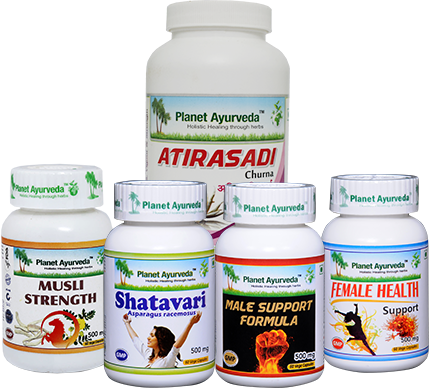 Planet Ayurveda brings the Female Health Support Capsules in order to support the female reproductive system. It is made from herbs like Asoka (Saraca indica), Lodhra (Symplocos racemosa) and shatavari (Asparagus racemosus). These herbs are cooling in nature and they balance the tridoshas when combined together. As the name suggests, it tones up the whole female reproductive organs structurally and functionally. It can also be used in ovarian cysts, endometriosis etc. Moreover, shatavari helps in rejuvenation.

Male Support Formula capsules are introduced by Planet Ayurveda with a view to enhance the functioning of male reproductive system. The ingredients involved are Ashwagandha (Withania Somnifera), Shilajit (Black bitumen) and Gokshura (Tribulus terrestris). This pure herbal formula can provide a solution to almost all male sexual problems involving premature ejaculation, erectile dysfunction and infertility. It boosts the energy and makes the sexual life smooth and natural.

Dosage – 1-2 capsules with plain water after meals twice a day.

Planet Ayurveda facilitates the Shatavari capsules which are prepared from the original standardized extract of Shatavari (Asparagus racemosus). Shatavari is a wonderful drug which helps a female to go through different phases of menarche, menstrual cycle and menopause with ease. It acts as an aphrodisiac and a uterine tonic. Being an adaptogen, it aids in getting over stress. Thus, it provides mental and physical well-being when it comes to matters of sexual discomfort and infertility.

Dosage – 1-2 capsules with plain water after food twice a day.

Musli Strength capsules from the house of Planet Ayurveda are made from the purest extracts of herbs like Gokshura (Tribulus terrestris) and white Musli (Chlorophytum borivilianum). These capsules are able to enhance the sexual strength in both males and females. The ingredients are capable of arousing the sexual urge and correcting the Apana vata (type of vata dosha).

Dosage– 1-2 capsules with plain water once or twice daily after food.

Sexual health is a fragile issue which needs more acceptance and understanding from the family as well as society. It needs to be opened up to the partner and to a good physician for any discomfort. Ayurveda considers sexual acts as a holy thing which should be performed with good intention for begetting a healthy offspring. Planet Ayurveda covers many of the finest and most effective Ayurvedic products which can make your sexual life a bliss.

Tags: Ayurvedic Remedies for Promoting a Healthy Sexual Life, Brahmacharya in Teenage, Celibacy in Teenage, Effect of Food Habits and Natural Urges, Maintenance of Sexual Hygiene, Sexual Relationship According to Seasons, Use of Aphrodisiacs

← What is Dementia? Causes, Symptoms and Ayurvedic Treatment
Best Alternative Treatment for Giardiasis in Ayurveda →