Non-cirrhotic portal fibrosis characterized chiefly by portal venopathy further progresses to portal hypertension as well as splenomegaly. With normal liver functioning, this disease tends to manifest itself with the presence of oesophageal varices consequently resulting in variceal bleeding. This disease presents itself with thrombosis of branches of the portal vein which proves to be the hallmark for the same.

Planet Ayurveda provides the Liver Care pack which includes a range of effective herbal products for treating Non-cirrhotic Portal Fibrosis (NCPF) as a whole. All these formulations are purely 100% natural and free from any side effects.

This formulation by Planet Ayurveda is one of the most effective Ayurvedic remedies for the treatment of non-cirrhotic portal fibrosis. 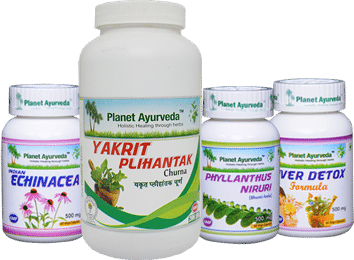 Dosage: 2 capsules twice a day with plain water after meals

These capsules are prepared by using a pure herbal extract of Bhumi Amla (Phyllanthus niruri). Bhumi Amlais one of the most effective natural Ayurvedic herbal remedies for diseases such as Jaundice, Hepatitis (A, B, C, D, and E), Liver Diseases, and Hepatomegaly.

Dosage: 1 teaspoon in 400ml of water. Keep boiling until it remains 50ml. Strain and drink. Leave the residue. Do it twice daily. Make fresh every time.

The use of the above-mentioned herbal products available from Planet Ayurveda can be extremely beneficial for people affected by Noncirrhotic portal fibrosis (NCPF) and other liver disorders. The products are prepared from 100% pure and natural herbs which have immense medicinal significance with regard to promoting healthy functioning of the liver.