Complement system in our immune system has surprising effects and acts as a double-edged sword. Genetic make-up of a person and proteins associated with it plays contradicting role depending on the disease. For this context, CHAPEL’s syndrome which is caused due to deficiency of CD55 protein and no doubt can get worse gradually if left untreated.

CD55 which is also known as complement decay – accelerating factor or DAF, is a protein found in humans usually encoded by CD55 gene. DFA is of 70Kda in length and remains bounded to cell membrane through a Glycophosphatidylinositol (GPI) anchor. This protein helps in proper regulation of complement system also known as complement cascade. Complement system is an essential part of our immune system which enables the phagocytes or antibodies in clearing infected cells and microbes in a body. Generally, this is associated with innate immune system which don’t get changed in a lifetime but can be recruited by antibodies produced by adaptive immune system.

What are the diseases associated with CD55?

Beyond the role of CD55 or DAF in complement system, it is known to act as inhibitor of complement system. But on the other hand it is associated with many diseases; studies have shown that increased expression of CD55 is correlated with colorectal and breast cancer. It’s expression can also lead to the onset of gastric, ovarian, prostate, cervical cancer, etc. In the similar way, CD55 can act as a receptor for various microorganisms and enteroviruses which ultimately promotes the chances of infections. According to a research, CD55 is one of the important host for Plasmodium flaciparum. Other than this, deficiency of CD55 can indicate onset of CHAPLE’S syndrome. Thus further causes glomerular diseases like Edema, hypoalbuminemia and hypogammaglobulinemia.

Complement hyper-activation, angiopathic thrombosis and protein-losing enteropathy (CHAPLE’S) syndrome is a rare disease caused due to mutation and deficiency of CD55 gene and protein respectively.

How CHAPLE’S syndrome can be diagnosed?

CHAPLE’S syndrome can be diagnosed by physical examination and clinical features associated with the disease. Although, clinical manifestations includes Flow cytometric immunophenotyping ; which is done for the detection of GPI – linked proteins in erythrocytes, monocytes, granulocytes, etc. And this can be performed using FLAER (Fluorescently labelled monoclonal antibodies) which involves aerolysin that binds to GPI anchor and indicates its expression of cells.

Indian traditional medical system has its roots attached with Ayurvedic herbs which can manage all ailments naturally. Some of the magical herbs which can boost your immune system and helps in preventing various harmful infections are –

Giloy (Tinospora cordifolia) which is known by the name of Guduchi is an amazing Ayurvedic herb that is being used in treatment since ages. This has been considered as a root of immortality or amrita. This herb is very beneficial in detoxification and blood purification and is a powerhouse of Anti-oxidants which helps in keeping our cells heathy and boosting immunity.

Spirulina (Arthospira plantensis) is a blue green algae which is a power-packed source of nutrients and vitamins. This plant possess anti-oxidant and anti-viral properties. Moreover, it is an amazing immunomodulatory agent and along with this it aids heathy digestion by enhancing the gut flora.

Planet Ayurveda provides some herbal remedies which are 100% pure, vegetarian and natural. 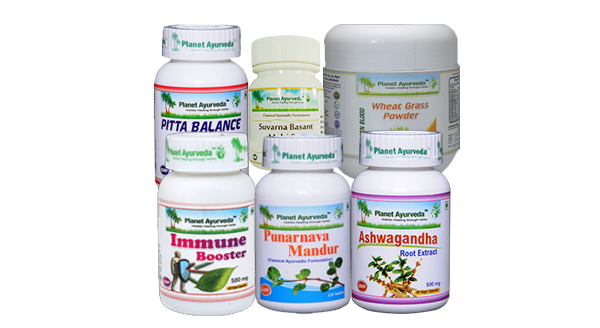 Ashwagandha capsules from Planet Ayurveda are pure and high in quality made from standardized extracts of Ashwagandha (Withania somnifera) which is also known as Indian ginseng. This Ayurvedic herb possess natural rejuvenating properties which manages anxiety, improves blood circulation, acts as an Anti-oxidant and amazing Nervine tonic. These capsules helps in pacifying Kapha and Vata dosha effectively.

Planet Ayurveda is offering another herbal remedy and it’s name is itself clarifying that it enhances and boosts immune system naturally. These capsules have been formulated from Grape seed (Vitis vinifera), Go-piyush (Bovine colostrum), Bhumi amla (Phyllanthus niruri) and Amalaki (Emblica officinalis). This herbal supplement is enriched with Vitamin C, micronutrients, minerals, proteins and Anti-oxidants which provides a protective shield to our body against diseases.

Dosage– 1 capsules in a day with plain water after meals.

Wheat grass powder is one of the most effective herbal remedy which contains Triticum aestivum (Wheat grass). This works magically in detoxification by removing toxins out of the body. It has done wonders in enhancing ability of immune system to fight against many severe ailments. This herbal supplement manages symptoms of various respiratory and gastrointestinal problems naturally.

Dosage – 1 capsule twice a day with plain water after meals.

Hence, from this detailed discussion on this topic we can conclude that our immune system plays essential in fighting many diseases and infection. Malfunctioning of various genes and proteins can lead to serious autoimmune conditions which can be managed naturally with right treatment.