Herbal Treatment for Tularemia in Ayurveda

Tularemia is a highly infectious systemic disorder. It is characterized by focal suppurative and granulomatous inflammatory reactions in many sites of the body. The causative agent is a tiny gram negative bacteria called pleomorphic coccobacilli. Basically the organisms cause a disease of animals, occasionally transmitted to man by direct contact with the infected animals or arthropod vectors. The animal reservoir comprises a wide variety of wild and domestic animals as well as birds and ticks. But the most common mode of transmission is rabbits and squirrels. In this article we will discuss every detail related to Tularemia and how it can be managed using Ayurvedic formulations.

The cases which are reported, ninety percent of them are due to the direct contact of humans with the infected animal. From this data it is easy to determine which part of the population is mostly affected. Most commonly affected population is butchers, hunters, farmers, cooks and housewives. The organism is said to penetrate the unbroken skin and so present a risk for medical and paramedical staff too. In rare cases the infection can also spread from the bite of an infected animal like deer, fly or variety of ticks. The most common fly responsible for spreading infection is Chrysops discalis. But beside that invasiveness and the effectiveness of the organism, man-to-man transmission has not been recorded. 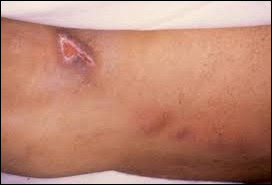 Generally the bacteria enters through the portal like through gastrointestinal or through eyes. So types are being described depending on the portal entry. The clinical pattern of the disease which are distinguished are:

In all the types the disease usually begins within two to five days following implantation of the organisms. However, the incubation period may vary from one to 21 days.

Symptoms depending on the type of tularemia Ulceroglandular tularemia

When the disease is contracted by the ingestion of contaminated food and water, the local ulceration may appear anywhere in the oropharynx.

In many cases no localized skin or mucosal lesions can be seen and the disease takes the form of a regional or generalized adenopathy alone. This pattern is termed as glandular tularemia. When the adenopathy is distributed throughout the body, it’s almost invariably accompanied by marked enlargement of the spleen and liver. The lesions in this diffuse form of the disease are similar to those described in the regional nodes.

The oculoglandular tularemia form of disease differs only in the initial portal of entry, which involves the conjunctival surfaces with the production of tiny papules that eventually become pustular and ulcerate. When these pustules occur on bulbar conjunctiva, they can perforate the eyeball to produce extensive type of infection in the anterior and sometimes posterior chambers of the eye.

There are very rare chances of complete destruction of eye structure and involvement of anterior chamber as well as posterior chamber can also be seen.If the optic gets involved then an extensive spread of infection is present and it can result in the complete destruction of eye structure. In almost all the cases the regional nodes undergo the characteristic gross and microscopic changes described. The oculoglandular variant of the disease may also be accompanied by generalised adenopathy and spleen enlargement.

Rarely, the disease assumes a typhoidal pattern manifested chiefly by acute septicemia without a localizing skin lesion and frequently without striking peripheral adenopathy. In this pattern the patients are acutely ill with extreme high fever, drenching sweats, headaches, prostration and sometimes shock, all reflecting the overwhelming bacteremia and toxemia. This form of disease may be extremely difficult to identify without a careful history of contract or exposure and appropriate diagnostic tests.

The course of disease is one of fairly striking chronicity and patients are frequently sick for as long as one or two months. Occasionally relapses occur along with re-exacerbation of lymphadenopathy which may progress to the stage forming new draining sinuses. In the usual case, the actual phase begins to subside about two to three weeks after the onset of fever or sooner if appropriately treated, and the convalescence, although prolonged, is uneventful.

Generally the treatment involves usage of antibiotics. Antibiotics include streptomycin, gentamicin, doxycycline and ciprofloxacin. The duration of treatment is around 10-21 days depending on the stage of illness and the medication used.

Planet Ayurveda is a leading Ayurvedic firm which deals with the manufacturing of herbal formulations. These formulations are prepared using potent herbs which are really effective in managing many conditions related to immune system disturbances and its working. The formulations prepared by Planet Ayurveda do not contain any kind of adulterants, dyes, additives, fillers etc. These medications are really potent to manage various conditions related to bacterial brone conditions that involve inflammation especially and are very fruitful hence giving positive noticeable results. The medication or formulations offered by Planet Ayurveda for the management of all types of tularemia are as follows: 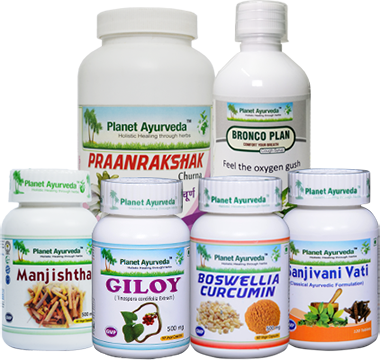