The stomach is a muscular organ that is located on the left side of our upper abdomen. The stomach is responsible for receiving food from the esophagus. It functions as a vital digestive organ and involves the second phase of digestion. The digestion is performed by the chemical breakdown with the help of hydrochloric acid and enzymes. In humans, the stomach secretes digestive enzymes and gastric acid to enhance the digestion of food. 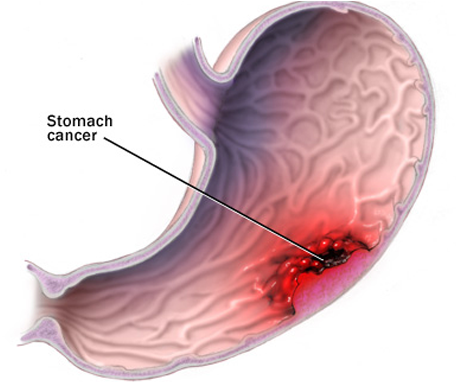 When the cells present in the stomach start to grow out of control it gives rise to a malignant tumor or cancer better known as stomach cancer. Through this article, we are going to talk about stomach cancer in detail and its effect on the human body along with its management through Ayurvedic medicine.

After swallowing and chewing the food, it enters into the esophagus, and through that, it carries food from the throat to the stomach. The esophagus is connected with the stomach at the GE junction (gastroesophageal), which is present below the diaphragm. The stomach is a hollow sac-like organ that is responsible for holding the food and digesting it by secreting gastric juices. The food is then mixed with gastric juices after that it emptied into the duodenum which is the first part of the small intestine.

Parts of the stomach

The stomach is divided into 5 parts known as:

The Cardiac, fundus, and body are known as the proximal stomach and the cells present in the stomach are responsible for making pepsins and acids. These gastric juices help in digesting food and making a protein called intrinsic factor, this is needed to absorb Vitamin B12 in the body. The remaining 2 parts called antrum and pylorus are known as the distal part of the stomach which has one inner and outer border. They are also called lesser and greater curvatures.

The stomach walls then contain 5 layers, the first one is the mucosal layer where the digestive enzymes and stomach acids are made. The next layer is the submucosal layer and after that is a thick layer of muscularis propria present outside the stomach helios in mixing and moving the content present in it. The last layers are the subserosa and outermost serosa which covers the stomach.

These layers are important in diagnosing the stage of cancer and to which extent it has spread. As it starts to grow from the mucosal layer and spreads into the deeper layer which is one of the dangerous ones.

Signs and Symptoms of Stomach Cancer

In most cases, it is found to be asymptomatic or no specific stomach is produced in the early stage of the disease. The symptoms are shown when cancer has reached an advanced stage and has metastasized spreading to other organs present inside our body. Here are a few symptoms that can be seen:

It is not clear what causes stomach cancer but researchers believe that there are many risk factors that can lead to the disease. It is known that cancer starts when the cells present in the stomach start to develop changes in its DNA. The DNA present in cells gives instruction on what to do and what not to do. The changes in DNA cause the cells to grow quickly whereas the healthy cells start to die. The accumulations of cells start to form a tumor which then destroys the healthy tissue. As time goes the tumor starts to break off resulting in metastasis of cells.

Men are most likely to suffer because estrogen helps in protecting women from cancer. These are the factors:

There are various procedures that can be used to diagnose stomach cancer and this includes:

Other staging tests will confirm the stages of cancer.

According to Allopaths, the treatment is based on the location of the cancer along with the presented symptoms. One of the main treatments that are given in Stomach cancer is Chemotherapy which causes various other side effects. In the severe stage, the surgical method including gastrectomy is done which involves the complete removal of the stomach. This leads to much more painful complications.

Planet Ayurveda provides 100 percent pure and natural herbal medicine that is free from all kinds of preservatives, additives, and chemicals. All herbal medicines are made under the supervision of an MD Ayurvedic Doctor. Each and every herbal remedy is clinically tested making it free from all kinds of side-effects and safe to use as well. Here are some of the herbs which will help in the management of disease: 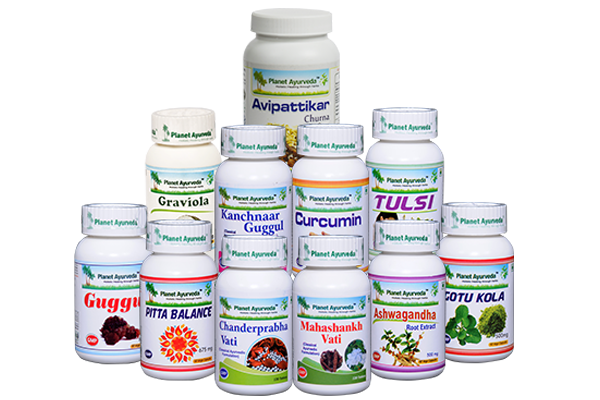 It is formulated with herbs like Guggul (Commiphora mukul), Karpoor (Cinnamomum camphora), Vacha (Acorus calamus), Haridra (Curcuma longa), Chavya (Piper chaba), Vidanga (Embelia ribes), Maricha (Piper nigrum) and many more. It helps in balancing the Kapha and Vata Dosha. It helps in treating the growth of cells and stooping the tumor to grow more. It helps in giving strength and reducing weakness from the body.

It is made from herbal ingredients like Ginger (Zingiber officinalis), Haritaki (Terminalia chebula), Amla (Emblica officinalis), Clove (Syzygium aromaticum), Nisoth (Operculina turpethum), Peepal (Ficus religiosa), etc. It is helpful in treating ailments like gastritis, hyperacidity, burning sensation, and indigestion which is very commonly found in Stomach cancer. These herbs contain anti-inflammatory, carminative, antioxidant properties that give a soothing effect to the digestive tract.

It is a mixture of herbs and minerals which includes Pippali (Piper longum), Chincha (Tamarindus indica), Rasa (Purified mercury), Shunti (Zingiber officinalis), Vida Lavana, Romaka Lavana, etc. This herbal remedy is useful in balancing the Vata and Pitta Dosha as it possesses stomachic, carminative and digestive properties. It is helpful in reducing pain from the intestine. It also helps in eliminating bloating and removing the feeling of fullness.

Dosage:- One tablet twice daily with water after meals.

In Ayurveda Pitta is represented as a Fire element that controls the digestive power and is formulated with Praval Pishti, Akik Pishti, Mukta Pishti etc. It is especially recommended to the people who suffer from a digestive problem caused by excessive intake of alcohol, spices, or salty foods contributing to causing stomach cancer. It helps in ailments like burning sensation in feet, hands, and chest. It is also very effective in headaches caused by digestive problems. It has proven to be best in Stomach cancer.

It is formulated with an herb called Gotu Kola (Centella asiatica) which contains various nutrients like Vitamin B, A, E, magnesium along with alkaloids which have proven best for maintaining the health of the digestive tract. It helps in making the immunity stronger and proving all the nutrition needed by the body.

It is the capsule formulated with an herb called Tulsi (Ocimum sanctum). Tulsi contains an antimicrobial property that helps in prevention from H.Pylori infection and reducing the risk of developing stomach cancer. It also contains an anti-cancerous property which makes it useful in any type of cancer.

Better known as Haridra (Curcuma longa) contains both anti-cancer and anti-inflammatory properties. Due to its property, it’s best for Stomach cancer and its related ailments. It works best for reducing the side-effects caused by radiotherapy and chemotherapy. It helps in stopping cancer from growing and controlling them.

It is made from herbs like Varuna (Crataeva religiosa), Amalaki (Emblica officinalis), Bibhitaki (Terminalia bellerica), etc. It is helpful in removing toxins from the body and is effective in all kinds of tumors. It is also very helpful in removing blockages from the lymphatic system. It is one of the excellent remedies for treating malignant cancer and also Hodgkin’s lymphoma.

t is made from the extract of a single herb which is known as Graviola (Annona muricata) and it contains anti-cancerous property making it very effective in Stomach cancer. Graviola helps in detoxifying the body and cleaning the system properly. It is overall proven to be the best herb for curing numerous types of cancer.

Dosage:- One capsule twice daily with water after meals.

It is concluded that Stomach cancer is a dangerous disease and it sometimes leads to death if not treated on time. According to modern science, the treatment is surgery while Ayurveda provides their holistic way to treat the disease naturally without causing any side-effects.