Peritoneum is a Serous membrane that forms the lining of the abdominal cavity or coelom in amniotes and also in some invertebrates. It covers almost all the intra-abdominal organs and is supported by the thin layer of connective tissue. Peritoneum is composed of a layer of mesothelium. Now if we talk about retro peritoneal then it means something that lies behind the peritoneal layer. Usually, abdominal organs are covered by peritoneal layer anteriorly and posteriorly. But in case of some organs peritoneum only covers them anteriorly but not posteriorly. Such organs or spaces or areas are termed as Retroperitoneal (behind the peritoneum). In this article, we will discuss in detail about one of its diseases named retroperitoneal fibrosis and its management with ayurvedic herbal formulations. 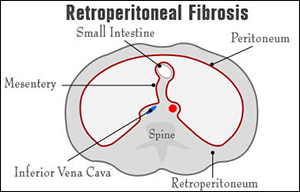 Fibrosis is a term used when there is thickening or scarring of connective tissue which is usually a result of injury. Retroperitoneal fibrosis is a rare inflammatory disorder in which there is abnormal formation of fiber like tissue that occurs behind the peritoneal layer. This abnormal tissue growth spreads to the ureters (tube that carries urine from kidneys to the bladder). Ureters are a very important part of the urinary system as it carries the waste fluid in form of urine from the kidney to bladder from where it gets excreted. Blockage or hamper in the function of the ureter directly affects the functioning of the kidney and hence can lead to conditions like hydronephrosis, recurrent kidney infection, kidney stones, and finally kidney failure. Kidney failure can further lead to multiple organ dysfunctioning and hence creates a life-threatening situation.

In ayurveda the retroperitoneal fibrosis can be compared with udara roga.

In human beings, different disease groups particularly the abdominal diseases arise from the defect of agni(digestion power) due to an increase of malas (excrements as well as Vata Pitta and Kapha). When a person with too much accumulation of doshas indulge in sinful activities, intake hot, saline, alkaline, and burning substances, suppress natural urges, have micro channel blockage, suffers from arsha (piles) finally lands in udara roga.

In modern science it is described that 60% of the cases do not have a definite cause. Gender and age said to be the contributing factors for the occurrence of this condition. It generally affects the age group lying between 40-60 years and predominantly males are commonly affected. In the remaining 40% cases causes can be prolonged bacterial infection like in actinomycosis, prolonged fungal infection such as histoplasmosis, intestinal tuberculosis, pelvic or abdominal tumors especially in retroperitoneal regions and recent trauma or major abdominal surgery.

This condition can also be the result of recent surgery of pelvis, cancer treatments like beam radiation therapy, chemotherapy and other medications like anti hypertensive drugs.

Due to the presence of fibrosis blood flow from aorta to the lower part of abdomen and body decreases and hence occurrence of symptoms is noticed. Symptoms appear like severe leg pain, pain radiating between your back and abdomen, dull and slowly progressing pain in the abdomen and back that can be hard to pinpoint, bluish discoloration of legs and feet due to blood deprivation, swelling, intense abdominal pain with bleeding. With long term ignorance patients can develop weight loss, appetite loss, fever, nausea which can be or cannot be associated with vomiting or nausea. Decreased urine production leading to oliguria, impaired limb movement, low levels of RBCs and high levels of WBC will also be noticed.

In ayurveda acharyas have mentioned poorva roopa and then discussed the symptoms of udara roga.

Loss of appetite, indigestion, the ingested food will turn vidagdha, oedema in feet, loss of strength, dyspnoea on exertion, dryness of body, enlargement of abdomen, organomegaly, fecal obstruction, flatulence and indigestion even after having light diet. (Charak Chikitsa 13/16-19)

The excessive growth in this condition can lead to damage in several areas which are being served by abdominal aorta. Long term blockage of ureters results in kidney failure.

For the management of this rare condition, planet Ayurveda offers some of its best herbal products that are totally herbal and have no side effects. The products offered are: 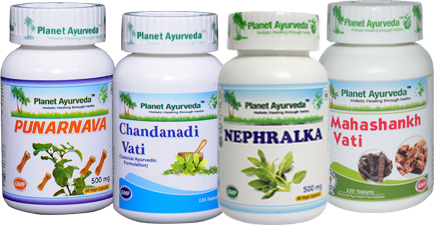 Mahashankh vati have various kinds of salts such as rock salt, black salt, and sea salt and herbs such as Shunthi (Zingiber officinale), Pippli (Piper longum), and Shuddha Vatsanabha, etc. It is beneficial to treat symptoms of retroperitoneal fibrosis such as loss of appetite, nausea, etc. It also helps to boost up the immunity. This formulation aid in digesting endotoxins. It also helps in stimulating the digestive system and works as a laxative too.

Nephralka are prepared using extract of several herbal ingredients such as Bhumi amla (Phyllanthus niruri), Mooli satva (Raphanus sativus), Revandchini (Rheum emodi), Kalmegh (Andrographis paniculata), etc. It helps in the removal of toxins from the body. The formulation is beneficial in maintaining the proper functioning of the kidney. These capsules help in balancing Tridosha (Vata, Pitta, and Kapha).

Punarnava capsules are made with the standardized extract of Punarnava (Boerhavia diffusa). Punarnava helps in the regeneration of new cells. Due to its diuretic property, it helps in eliminating toxic substances from the body. Punarnava is best for balancing Vata and Kapha Dosha. It is primarily used for urinary and kidney disorders.

Chandanadi vati is a combination of more than 10 herbal ingredients that are Amalaki (Emblica officinalis), Safed Chandan (Santlum album), Choti elaichi (Elettaria cardamomum), Gokshur (Tribulus terrestris), Karpoor (Camphora Officinarum), etc. It helps in maintaining the digestion and metabolism of the body. It also improves blood circulation in the body. This medicine helps in balancing Pitta and Kapha Dosha. In retroperitoneal fibrosis it works by managing conditions like obstructed blood supply, loss of appetite, and nausea. It also imparts a soothing and cooling action

← How to Raise Platelet Counts of a Child Below 5 years age
Widowmaker Heart Attack & Its Management in Ayurveda? →