Ewing’s Sarcoma is a very rare type of cancer that occurs in bones or soft tissue. It can spread from bones to soft tissues. It affects about one in a million people per year. It is slightly more often seen in males than in females. White people or Caucasians are mostly affected than African Americans or Asians. Ewings sarcoma in adults is uncommon. Its exact cause is not clear yet, the gene mutation is considered to cause it. The most common system is pain and swelling at the site of the tumor. It can be diagnosed based on blood investigations and imaging tests. Lifestyle and diet changes, home remedies, and herbs are helpful in EWING’S SARCOMA.

In 1920, James Ewing established that the tumor is a distinct type of bone cancer named Ewing’s sarcoma. Ewing’s sarcoma is a rarest type cancerous tumor that forms in bones or the soft tissues around bones which supports bones such as cartilages, muscles, tendons, or the nerves. The most common site where it begins is the pelvis, long tubular bones including the femur, humerus, and chest wall. It occurs usually in teenagers and young adults, often in people from the ages of 10 to 20 years. It has a high rate of being cured. 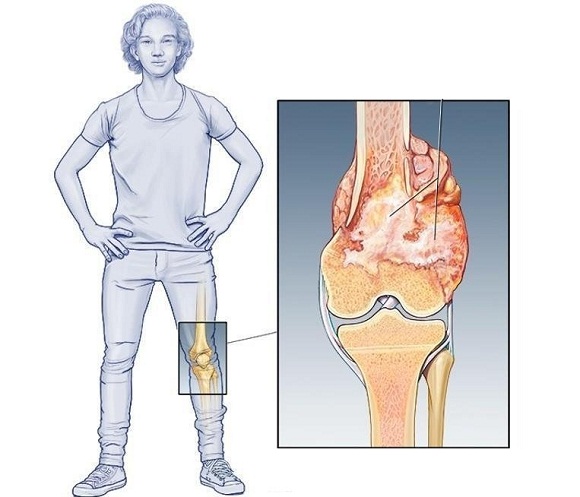 Cancer is not a new term in Ayurveda. In Ayurvedic concept, according to our trio ‘Acharya  Charaka’ and ‘ Acharya Sushruta ‘  and ‘Acharya vagbhat’  cancer or tumor is described as inflammatory or non-inflammatory swelling and described either as ‘Granthi’ (minor neoplasm) or ‘Arbuda’ (major neoplasm) in their respective Samhitas

According to Ayurveda cancer can be of following types –

Granthi is classified into the following types:-

The main aim of ayurvedic therapy to cure any disease or ailment is to find the exact cause of the illness and to eliminate that cause if possible.

While the therapeutic approach of treatment by Ayurveda is of four main types categorized as follows:

In Ayurveda commonly herbal decoctions or formulations used are prepared from polyherbal having great potential for the cure of cancer. On a scientific basis, formulations are used for the treatment of cancer work by acting on multiple biochemical pathways of the body involved in the pathology of cancer and affect multiple organ systems altogether. These formulations help to nourish the whole body, support body defense mechanism, and the immune system.

Ewing’s Sarcoma is of three main types depending upon the spread of tumors from bone or soft tissue in which it is started. Types are as follows:-

It is a type of Ewing’s sarcoma in which cancer remains localized to the site from where it is started and does not spread to other areas of the body.

It is a type of Ewing’s sarcoma in which cancer spreads to the surrounding soft tissue, other bones, bone marrow, other body parts even including vital organs such as the lungs, heart, kidneys.

It is a type of Ewing’s sarcoma which is recurrent even after a successful course of complete treatment. In such cases, cancer does not respond to the treatment. It is most often seen in lung cancer.

Ewing’s sarcoma can also be classified based on-site or area in which it is present, following are types:-

85-87% of Ewing’s sarcoma occurs in bones. Most often it starts in the pelvis, followed by proximal tubular bones such as femur bone (thigh bone), shoulder blades, and ribs. It can occur any bone of the body.

It is the type of Ewing’s sarcoma that affects soft tissues surrounding bones such as cartilages, muscles, tendons, fat. It can also affect soft tissues of vital organs – lungs, heart, kidneys. It is rare in soft tissues of the head, neck, chest, arms, legs, abdomen, and back.

It is a type of Ewing’s sarcoma in which cancer occurs in nerves of the different body parts.

It is a type of Ewing’s sarcoma which is a type of peripheral primitive neuroectodermal tumor that affects the chest region mainly.

Tumors usually occur in the pelvis, legs, chest region but symptoms may depend on the site of the tumor where it is present. Often seen symptoms are:-

The exact cause of Ewing’s sarcoma is not clear. Most cases appear to occur randomly in life. It is not inherited.

Complications in Ewing sarcoma can occur in 2 main following ways:-

When Ewing’s sarcoma spread from the site of origin to other areas of the body, it makes treatment and recovery more difficult. Complications depend on the site where it has spread such as:-

2. Side effects of long term treatment

The treatment used in Ewing’s sarcoma is so aggressive that it causes ill effects in the body in the short and long term. Its treatment use chemotherapy and radiotherapy which harms the body in many ways –

7. Biopsy – It can be a Needle biopsy or surgical biopsy.

3. Pippali (Piper longum) – It is an herb used traditionally as an immunomodulatory agent in inhibiting the growth of abnormal cells of cancer or cancer-like conditions.

4. Bhallatak (Semecarpus Anacardium) – It contains alkaloids bhilwanol and semecarpol having anti-inflammatory, scraping action, it can be used in Ewing’s sarcoma for scraping of tumors.

5. Guduchi/giloy (Tinospora cordifolia) – It is the potent detoxifying herb of hot potency having antipyretic, analgesic, blood purifier,  immunomodulator, anti-emetic and anti-oxidant in actions and used in pain, persistent fever, vomiting.

6. Vikankat (Flacourtia romantchi) – It is an herb having mainly anti-inflammatory and blood purifying action. It helps decrease inflammation.

7. Danti (Baliospermum montanum) – It is a pot potency herb which as a laxative, anti-inflammatory, anti-pyretic, anti-asthmatic action It can be used in decreasing swelling, fever, breathing problem in Ewing’s sarcoma.

13. Dhatura (Datura metel) – It has anthelminthic, anti-inflammatory, analgesic properties, useful in abdominal pain, inflammation in any part of the body. Also, it has some anti-cancerous properties.

15. Garlic (Allium sativum) – It is an herb of hot potency having analgesic, anti-inflammatory, diuretic action. It can be used to relieve pain associated with Ewing’s sarcoma.

16. Suran (Amorphophallus campanulatus) – It is an herb having mainly analgesic and anti-inflammatory, cell growth-inhibiting properties. So it can be used in Ewing’s sarcoma for restricting the growth of the tumor.

20. Muchkund (Pterospermum acerifolium) – It is hot in potency and has analgesic, anticoagulant action so it can be used in relieving pain.

Some of the home remedies that may be helpful in Ewing’s sarcoma:

1)  Consumption of ginger in the form of ginger juice or with water helps in managing nausea and vomiting due to chemotherapy.

3)  In peripheral neuropathy, glutamine is beneficial to reduce it. Also in mouth sores and soreness, it is helpful.

5)  Herbal Remedies by Planet Ayurveda for Ewing’s sarcoma. It includes combinations of effective herbal formulations as CRAB CARE PACK. It is helpful in healing, reducing side effects, and complications associated with cancer treatment.

It includes the following remedies:- 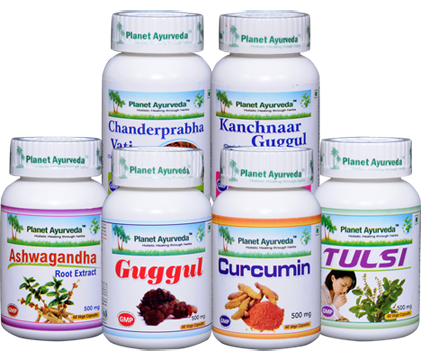 It has anti-oxidant and anti-inflammatory properties. It is helpful in the nourishing brain and for maintaining healthy well being.

Guggul has anti-oxidant property, so helpful in cell and tissue growth and repair.

Curcumin is the active constituent of the herb turmeric. It also possesses antioxidant, anti-inflammatory, and healing properties. So, it helps reduce free radicals in the body.

Tulsi is traditionally used in houses, it has anti-oxidant properties and helpful in malignant tumors,

It is the classical ayurvedic formulation prepared from different herbs helpful in calming various conditions of the body.

It is a polyherbal formulation having kanchnaar (Bauhinia variegate) and guggul (Commiphora Mukul) as the main active ingredients. It helps control various growths of the body and promotes the healthy growth of cells and tissues.

Other Precautions To Be Taken

As the exact cause of Ewing’s sarcoma is not known but the following preventions can be taken to prevent the body from getting harm:-

As we have studied ewings sarcoma is the rarest type of bone cancer and the ayurvedic approach to cancer diagnosis and treatment is a holistic approach and preferred these days. Many case reports and researches are available that show the efficacy of used herbs and treatment. The current treatment of cancer is focused at the molecular level than the whole organism level.

1. What type of cancer is Ewing sarcoma?

Ewing’s sarcoma is the rarest type of cancer that forms in bone or surrounding tissues around a bone or anywhere in the body. It can occur in any bone of the body but most often occur in the pelvis, followed by femur bone (thigh bone), chest region, ribs, shoulder blades, arms, spine, feet, and hands.

2. Can adults get Ewing’s sarcoma?

Ewing’s sarcoma is a type of tumor that affects bones or surrounding soft tissues. It mainly occurs in children and young adults in people of ages 10 to 20 years. It is less common in adults usually.

Most common and first symptom and sign seen in Ewing’s sarcoma is the pain, swelling, tenderness, stiffness of the part, or area where the tumor is located. Pain can worsen with movement and at night. Also, it can become more severe and steady with time. The lump may present at the site of the tumor which may feel warm and soft to touch.

4. Has anyone survived Ewing’s sarcoma?

5. How is Ewing’s sarcoma diagnosed?

Pain is the most common symptom of Ewing’s sarcoma seen in 85% of children and young adults at the site of the tumor or nearby areas along with stiffness, swelling, redness, tenderness. Pain can become severe and can come and go at times. Pain often increases with exercise or doing the movement.

7. Does Ewing’s sarcoma run in families?

No exact cause is known of Ewing’s sarcoma and no evidence of genetic inheritance is seen. It is considered that it occurs due to changes in chromosomal patterns of tumor-forming cells. It clarifies that it does not run in families.

8. How can Ewing sarcoma be prevented?

As it is always good to follow a healthy diet pattern and lifestyle. Maintaining a healthy weight, avoiding alcohol, smoking, tobacco snd many more drugs that have degenerative effects in the body. But there are no lifestyle changes or diet pattern which can prevent Ewing’s sarcoma.

9. Can metastatic Ewing sarcoma be cured?

Metastatic Ewing’s sarcoma is a type in which the tumor spreads to other soft tissues of the body from the site of origin. The majority of the patients do not get cured completely and die of recurrent Ewing’s sarcoma. Also, it depends as if it spreads to the vital organs it becomes more difficult to treat. Continue investigations are done with treatment.

Ewing’s sarcoma includes pain, stiffness, swelling, redness, and tenderness at or near the site of the tumor. The lump may be present over there which is warm and soft to touch often along with fever, tiredness, malaise, weight loss. Increase in pain with movement, at night.