A Holistic Approach To Psoriasis

According to this shloka, ekkushta is defined as the disease in which there is no perspiration, is extensive (affects the large area) and looks like fish scales is known as ekakushta.

Psoriasis is a chronic and inflammatory condition which is caused by the hyperproliferation of the keratinocytes in the epidermis with the well-defined erythematous lesion and slivery plaques with a predilection for the extensor surface and scalp.

In Ayurveda, it is related to kushtha in which kushtha means a disease which makes one’s skin ugly or disgraceful. It is classified into two main groups: mahakushta and kshudrakushta, which are again classified into seven types and eleven types. “Kushnati iti kushtha” which destroys twak and other dhatus is called as kushta.

What are The Causes of Psoriasis? 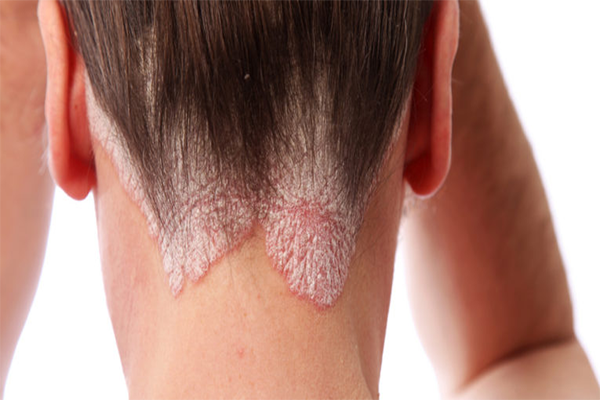 It means that this disease is caused due to the nidan sevana which increases the tridosha and these doshas settle down in rakta, twak, ambu and mamsa. These vitiated doshas get accumulated in the dhatus (tissue elements) which cause kushtha.

What are the Symptoms of Psoriasis?

In earlier stages, the symptoms go undetected or mild symptoms may appear such as faint, small and dry patches on the skin.

Planet Ayurveda offers effective treatment for psoriasis which is psora care pack and it is 100% pure, natural and vegetarian. This pack strictly follows the principles of Ayurveda and is safe to be used as these ayurvedic formulations are free from various side effects. 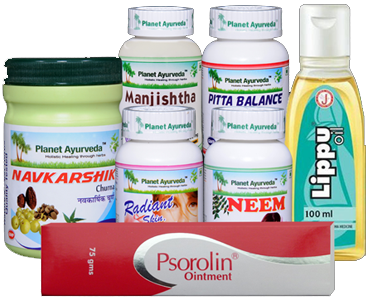 Navkarshik churna is a natural and herbal formulation without any addition of chemicals in it. This churna contains amlaki, bibhitaki, haritaki, giloy, neem, Vacha, manjistha and daruharidra. As this churna contains triphla so it is very helpful in removing toxins from the body and provides strength to the immune system. Giloy present in it acts as a natural immunomodulator that improves the immunity and daruharidra acts as an anti-inflammatory.

Radiant skin hair nails formula consists of pitpapada, ghritkumari, chirata, and manjistha. Manjistha is a useful herb in the lymphatic system that removes toxins from the body. Chirata balances all the three doshas of the body. Ghritkumari stimulates the defense and adaptive mechanism of the body. These herbs in combined state supply oxygen to the skin cells and improve the blood flow to the vessels.

Neem capsules contain pure neem leaves (Azadirachta indica) and these are rich in carbohydrates and fibers. These capsules are beneficial in balancing Vata, Pitta and Kapha dosha and boost up the immune system of the body.

Manjista capsules boost up the immunity and increase the white blood cells level in the body. These capsules pacify the vitiated pitta and Kapha Dosha. It has the ability to penetrate deep into the tissues and neutralizes its effects. Manjista herb is very helpful in treating symptoms related to psoriasis.

Dosage: 1 capsule two times daily with plain water after the intake of food.

Lippu oil contains an extract of Pongamia glabra which contains a chemical constituent karanjin. This chemical constituent has microbial and insecticidal properties that kill the microbes and solves the problem of dry and itchy skin. This oil moisturizes the skin and controls the trans-epidermal water loss effectively.

Dosage: Apply this oil on the affected areas after the bath and then expose to sunlight for 2 to 3 minutes.

Psorolin ointment is very effective when the person has scaling skin because it contains extract of Wrightia tinctoris and Cynodon dactylon. This oil also controls hyperkeratosis.