What Is Type I and Type Ii Diabetes

When blood contains a high amount of sugar level in it ( high blood glucose) for a long period of time, it is known as diabetes. It’s mainly a disease of the pancreas that produces hormone insulin which helps in absorption of the sugar in the cells. According to  Ayurveda  Madhumeh is a term used for  Diabetes Mellitus It’s a silent killer. Diabetes is also known as Prameha  (Passing of excess urine in quantity and frequency) and also considered as a Maharoga  (Major Disease). 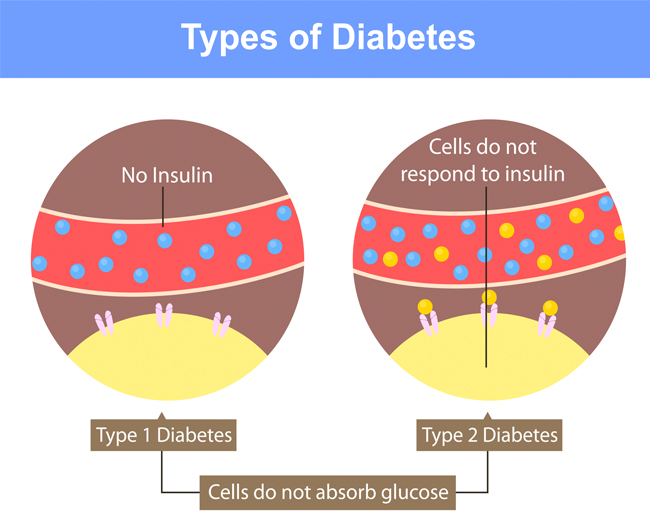 WHAT IS TYPE I DIABETES.

Type I Diabetes cause

SYMPTOMS OF TYPES I DIABETES MELLITUS

THE CONVENTIONAL SYMPTOMS OF TYPE I DIABETES MELLITUS INCLUDE:

DIAGNOSIS OF TYPE I DIABETES

PREVENTION OF TYPES I DIABETES

WHAT IS TYPE II DIABETES?

HOW DOES TYPE II DIABETES OCCUR

Type II diabetes occurs when diabetes controlling hormone is not used effectively by the body, resulting in:

In advanced stages,  Type II Diabetes Mellitus may leads to damage to hormone producing cells leading to the deficiency.

Numbers of factors can increase the risk of developing type II diabetes,  which include;

Types II  diabetes is usually diagnosed using the: GLYCATED HEMOGLOBIN (A1C) TEST. This blood test indicates your average blood sugar level for the past two to three months. The normal level is below 5.7 and 6.4 percent is considered prediabetes. An A1C level of 6.5 percent or higher on two separate tests means you have diabetes.