Natural Herbs and Diet to Prevent Psoriasis in Ayurveda

Psoriasis is an inflammatory disorder of skin with symptoms like cracks, itching, soreness, redness and bleeding. It results in pain and discomfort in the skin. Psoriasis can occur anywhere in the body but most prevalent sites are scalp surfaces, back of wrists, elbows, knees and buttocks. It can also occur on the nails. Psoriasis has no permanent cure because it is a chronic inflammatory condition. In psoriasis, thickened areas of silvery scales can be most commonly seen in the elbows, scalps, lower back and knees. It is a lifelong skin disease (non-contagious).

What is the Prevalence of Psoriasis ?

What are the Etiological Factors of Psoriasis?

What are the Types of Psoriasis?

There are many different types of psoriasis. They can be differentiated on the basis of location, severity, duration, size and shape, and the patterns of scales. One of the most commonly occuring psoriasis is plaque psoriasis. Some common type of psoriasis and their inflammation sites are as listed below :-

What are the Symptoms and Signs of Psoriasis ?

The symptoms and signs of psoriasis differs from person to person which are as follows :-

How to Diagnose Psoriasis

Following are the Diagnostic Tools which can be used to Diagnose Psoriasis :-

There are various natural herbs for psoriasis which are as follows :- 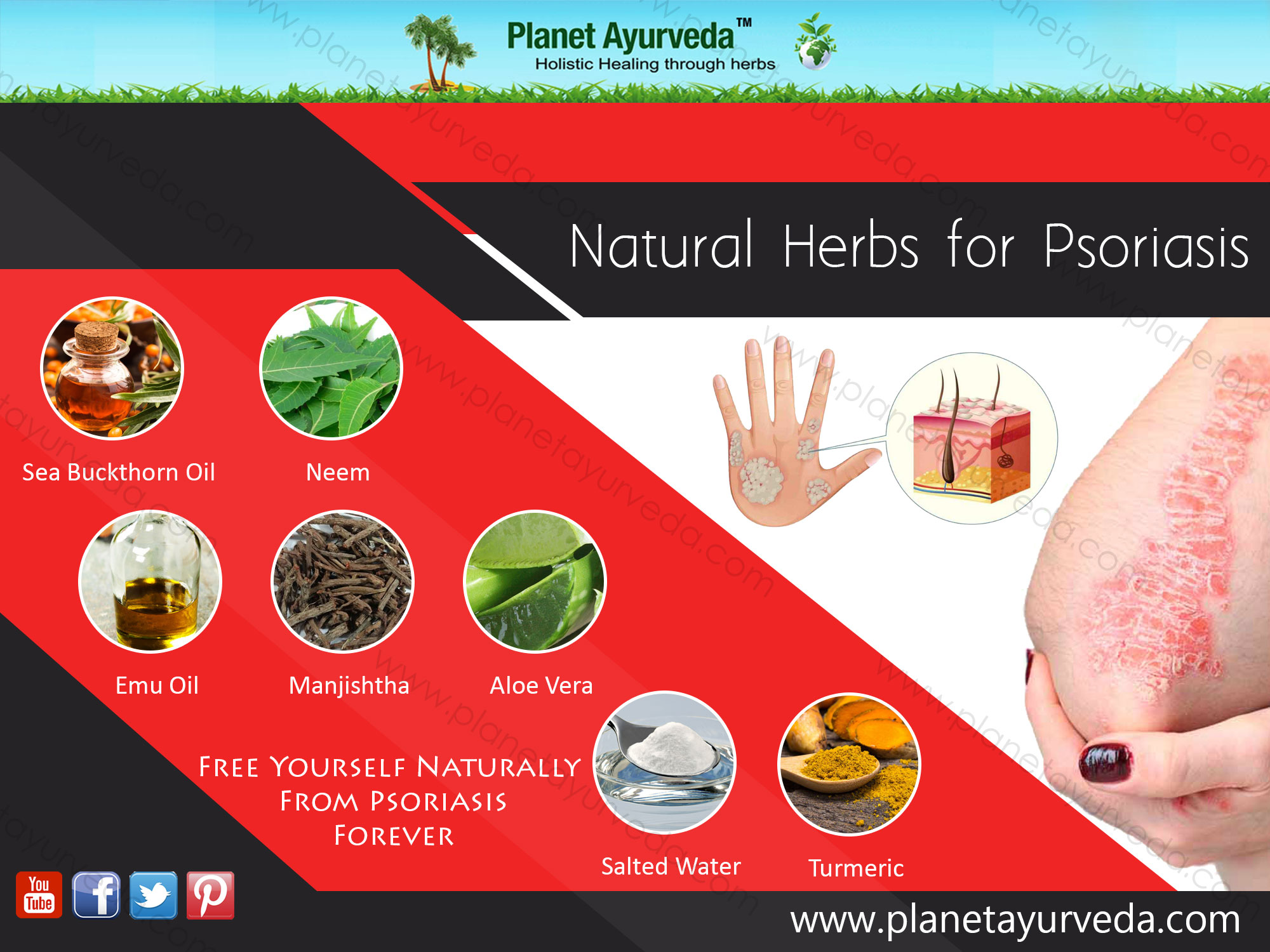 This herb has great therapeutic importance in Ayurveda from ancient times to treat the skin diseases. Neem is packed with antibacterial, anti-parasitic, anti-fungal, anti-inflammatory and analgesic properties. Hence neem is good herbal remedy to provide relief in the symptoms of psoriasis like soreness, itching, burning around patches. It helps to boost up the immune system. It helps in purification of blood. It acts as wonderful antiseptic and detoxifier.

This herb is packed with the blood purification properties and helps to remove the impurities from skin. Moreover it helps to control over activation of the immune system in the psoriasis.

Gel from the aloe plant can be applied to the skin up to three times a day. It reduces redness and swelling associated with psoriasis.

Turmeric or what we call haldi in hindi is known for its anti -inflammatory and antioxidant properties. Curcumin the active ingredient has ability to alter gene expression. A layer of haldi and water paste in found to be very effective. It helps in relieving swelling, pain and inflammation in the psoriasis. Add turmeric in your daily meals to improve psoriasis.

Application of paste of oats removes redness and dryness of the skin.

Water when mixed with sea water can be used for bath as it cleans and detoxifies the body. Avoid putting it on open wounds.

It helps in reducing the risk of localized psoriasis. Increases the dose of vitamin D in the case of psoriasis. Include cod liver oil, salmon, eggs, Swiss cheese, mackerel, orange juice and fortified cereals in your diet. Exposure to sun is another alternative which is a huge source of vitamin D.

As it alters the reactivity of immune system, psoriasis ultimately get improved.

Use organic chamomile tea in your diet so as to improve the symptoms of psoriasis.