How to Treat Acoustic Neuroma with Herbal Remedies?

What Is Acoustic Neuroma?

Concept of Cancer in Ayurveda

According to Ayurveda cancer is known as Arbuda. Arbuda is caused by Tridoshas with a dominance of Vata dosha. Vata dosha is accountable for cell division and aggravation of Vata dosha and diminished Kapha doshas or both the doshas interconnected with one another may result in proliferation and multiplication of cells with the influence of Pitta dosha. 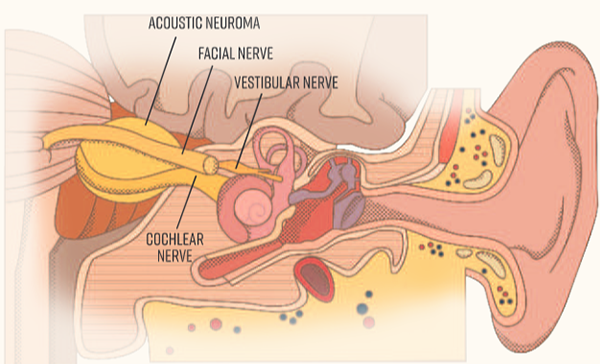 Aggravation of Vata dosha and suppression of Kapha dosha or even both the doshas interacting with one another may result in the proliferation of cells. However, the Ekadesavriddhi (growth at a specific part) in the Karna is a part of abnormal cell division resulting in tumors.

Acharya Susruta has explained about six stages in the pathogenesis of all diseases. They are,

It can be correlated in Ayurveda to the disease called as Karna Arbuda. It happens due to the impairment in the functions of Vatha and Kapha dosha which leads to a growth of an abnormal tissue which is structurally and functionally of no use to the body. Thus it creates unrest in the body and forms an outgrowth.

It is classified in Ayurveda as,

It has been categorized in accordance with Dhatu and Dosha into 7 types,

Symptoms According to Charaka

Charaka has described some symptoms for the disease Karna Arbuda such as,

Symptoms of Acoustic neuroma develop slowly over the years and they are often subtle. They usually appear from the tumor’s impact on the hearing and balance nerves of the body. Pressure from the tumor on nearby nerves controlling facial muscles and sensation, nearby blood vessels, or brain structures may also cause problems.

What causes Schwann cells to multiply too quickly and leads to Acoustic Neuroma is still unidentifiable, it remains idiopathic. But there are some risk factors which can be taken into consideration,

The cause of acoustic neuromas appears to be a flaw in a gene on chromosome 22. Normally, this gene fabricates tumor suppressor protein that helps check the growth of Schwann cells covering the nerves.

Several complications can arise because of Acoustic neuroma, which includes

Sarivadi Vati is an amazing combination of natural herbs which are mainly used to manage various health conditions. Primarily this medicine is used to manage hearing problems such as tinnitus, ear infection etc. Anti-microbial action of this medicine helps to fight against bacterial infections in the ear. Sarivadi Vati is very beneficial in managing the symptoms such as fainting and temporary confusion which arises due to neuroma, also nourishing the Vestibulocochlear nerve.

Boswellia Curcumin capsules made by Planet Ayurveda are one of the most effective combinations of anti-inflammatory herbs. It’s also very effective in the treatment of Cancers and brain tumor. This combination is very effective in all sort of cancers as Boswellic acid and curcuminoids are active ingredients and are effective in

Constituent compounds of Boswellia are studied to be directly cytotoxic to brain tumor cells which help in killing and inducing apoptosis to the cancer cells.

The manjistha capsules are effective medicine to be used in the treatment of Acoustic neuroma. This capsule contains a pure herb extract of manjistha. This herb helps balance impaired Kapha and pitta dosha in the human body and also helps in detoxification of the blood and eliminates toxins from the body. It has anti-inflammatory property which helps in reducing inflammation and swelling.

Planet Ayurveda offers Brahmi capsules that are used in the treatment of Acoustic neuroma. It’s a purely herbal product containing Bacopa Monnier extract. It acts as the best nervine and general tonic. It is used in the treatment of many ailments such as vertigo, anxiety, stress, blood pressure and it’s a very potent nervous tonic and anti-anxiety agent. It nourishes the neurons which in turn help in strengthening the nerve and its supply.

Kanchnaar guggul is an ayurvedic formulation offered by Planet Ayurveda. This ayurvedic preparation is very effective to treat glandular swelling, polyps, lymph node swellings and other abnormal growths in the body. It supports the proper function of lymphatic systems and helping eliminate toxins from the body. It’s very beneficial in the treatment of tumors, cysts, and cancers. It helps in the management of Acoustic neuroma.

The bilwadi oil is an Ayurvedic formulation used to put in the ear as drops. This oil is considered one of the best medications for the Auditory system It is an Ayurvedic herbal oil which is used to treat various ear problems such as pain in the ear, constant ringing, buzzing or whistling in the ear, loss of hearing, etc. This oil has antimicrobial, antiseptic and astringent properties that strengthen the auditory nerves when putting into ears as karna purana. Use of this oil as ear drop helps in deafness, difficulty in hearing, ear discharge and various ear infections.

Dosage: 2 drops in both ears