The nasal septum is one of the walls present in the nose that helps in dividing the left and right of the nasal cavity. The nasal septum is made from bones and cartilage and the quadrangular cartilage helps in making up the front part of the nasal septum. The vomer and ethmoid bones help in making up the paper-thin back part of the septum. The main function of the septum is providing structural support to the nose and regulating the smooth flow of the air through the nasal cavity. One of the commonly seen problems is the deviated nasal septum which seems normal but causes difficulty in breathing. In this article, we are going to talk about deviated nasal septum along with its herbal medicine to manage the symptoms.

What is Deviated Nasal Septum?

What are The Signs And Symptoms of The Disease?

Most of the people who have septal deformity mostly show no symptoms and the patient might not even know that they have deviated nasal septum. Here are some signs and symptoms noted in this including 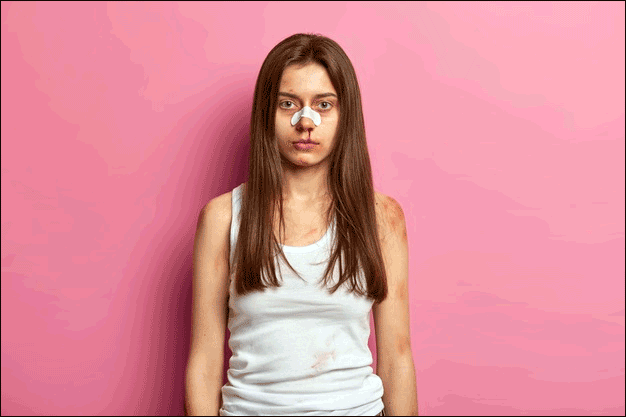 Due to the deviated septum the nasal area may become very dry which increases the risk of developing nosebleeds.

2. Obstruction of one or both the nostrils

The obstruction caused due to the deviated septum may cause difficulty in breathing through the nostrils. It might be noticed when the patient suffers from an upper respiratory tract infection. The nasal passages swell and become narrow making it difficult to pass air.

There are some debates about facial pain caused by the deviated nasal septum. One of the possible causes is the one-sided facial pain that can be caused due to the severely deviated septum in the nose causing pressure.

4. Sleeping on a particular side

Some people might prefer sleeping on a particular side in order to optimize their breathing if one of their nasal passages gets narrowed.

How Deviated Nasal Septum Is Caused?

A deviated septum can be resulted due to injury of the nasal septum which causes it to move from its position. In infants, the injury might also be caused during the birth of the child. In adults and children, a wide range of accidents can lead to a nose injury and deviated septum of the nose. Trauma to the nose is most common in people who play sports like wrestling or any other contact sports.

In some cases, the deviated nasal septum is caused during the development of the fetus.

The normal aging process might also affect the structure of the nasal septum, making the condition worse.

How Deviated Nasal Septum Can Be Diagnosed?

The medical history of the patient is also very important for the diagnosis of difficulty in breathing caused due to deviated septum.

Planet Ayurveda provides 100 percent pure herbal medicines which are vegetarian. Every herbal remedy is made under the supervision of an MD Ayurvedic Doctor and is safe to use. They are free from additives, preservatives, and chemicals. These are the herbal medicine provided by Planet Ayurveda 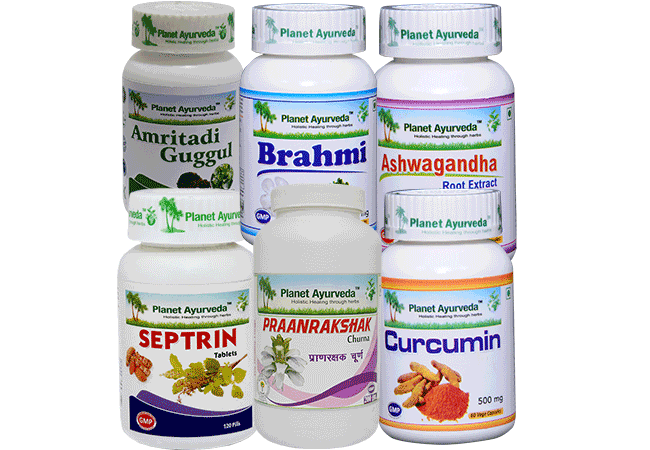 It is made from the single herb known as Haridra (Curcuma longa) and is packed with anti-inflammatory properties. One of the commonly seen symptoms is swelling of the lining of the nasal cavity. Curcumin will effectively reduce inflammation and make it easy to breathe.

Dosage:- One capsule twice daily with water after meals

These tablets are made from herbs like Guggul (Commiphora mukul), Pippali (Piper longum), Tulsi (Ocimum sanctum), Maricha (Piper nigrum), and many more. It is very effective in preventing infection which is one of the main causes for the obstruction in the patient with Deviated nasal septum.  It is also very effective in removing ailments like infection of the upper respiratory tract.

Dosage:– One capsule twice daily with water after meals

This herbal medicine is one of the effective churna for any type of chronic allergies as it is packed with herbs like Mulethi (Glycyrrhiza Glabra), Vaasa (Adhatoda vasica), Kantkari (Solanum xanthocarpum), Dalchini (Cinnamomum zeylancia) etc. It is very effective in treating the inflammatory condition of the upper respiratory tract and is effective in conditions of Deviated nasal septum.

Dosage:- One teaspoonful twice daily with water after meals.

Dosage:– One tablet twice daily after meals with water.

These capsules are made from one of the excellent herbs called Brahmi (Bacopa monnieri). They are very effective in enhancing the properties of memory. They will help in improving breathing power by relaxing the muscles

Dosage:- One capsule twice daily after meals with water.

It is made from one of the famous herbs called Ashwagandha (Withania somnifera) which is very effective in increasing the stamina of the body. It will effectively increase the Vata of the body and will give nourishment to the nasal tissue.

Deviated nasal septum is a disease that most of the time does not cause any problem. In some cases, it might lead to breathing difficulties and this can be easily managed through herbal medicine. All the above-mentioned herbal medicine will help in reducing the signs and symptoms of the disease without causing any side effects.

← How to Treat Seborrheic keratosis in Ayurveda?
What is The Best Treatment for Sarcoidosis? →