Multiple system atrophy is also known as shy-drager syndrome. It is a rare degenerative neurological disorder that affects your body’s involuntary movement. Involuntary are basically the autonomic functions that include blood pressure, breathing function, bladder function and also motor control. This condition is also known by the names like olivopontocerebellar atrophy or striatonigral degeneration. It has got many similarities with parkinsonism disease like slow movement, poor balance while walking but without tremors and rigid muscles. This condition is manageable and modern medication can slow down the progression of multiple system atrophy. But it has no definite cause mentioned and because it usually appears in late 50’s or 60’s it is understood to be directly related to adulthood. In this article we will discuss the causes, symptoms according to types of MSA, general signs in these conditions, complications and how it can be managed using ayurvedic medications. 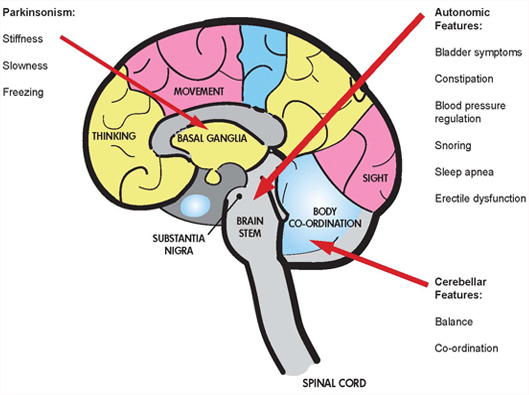 Multiple system atrophy is a relatively rare sporadic condition seen in middle aged and elderly patients. Features of parkinsonism often without tremor are combined with varying degrees of autonomic failure, cerebellar involvement and pyramidal tract degeneration. The parkinsonism is usually of an akinetic rigid form and often accompanied by marked neck flexion. Autonomic features can be very disabling with severe postural hypotension, sphincter disturbances and sometimes respiratory stridor. In ayurveda this condition can be compared with vata vyadhi which is understood as a group of neurological disorders.

In modern science the cause of this condition is not known. They believe that it is the result of environmental toxins. But there is no present theory to support this belief. Shy drager’s syndrome causes shrinkage or atrophy of portions of your brain that are cerebellum, basal ganglia and brainstem. These portions of the brain are responsible for regulating internal body functions, gastric and motor controls. In multiple system atrophy there is overexpression of alpha- synuclein named protein in brain neurons.

In ayurveda the lakshana of vitiated vata resembles a lot with the symptoms and signs of MSA. these lakshana are contractures in affected parts, stiffness in joints, piercing type of pain in bones and joints, stiffness in legs, head and back causing difficulty in movement, lameness with one leg, lameness with both legs, organ dystrophy, insomnia, numbness and throbbing sensation in body. (ch chi 28/20-23).

Patients generally develop conditions like breathing abnormalities, injuries due to fall because of poor balance or fainting, progressive or long term immobility, lack of ability to do routine work and take care of themselves. In advance stages vocal cord paralysis and complete inability to swallow can develop. Patients typically live for around 7-10 years after he or she has been diagnosed with multiple system atrophy or Shy-drager syndrome.

for the management of Multiple system atrophy, Planet Ayurveda offers some of its best herbal medications that are very much potential in managing this condition. These medications are: 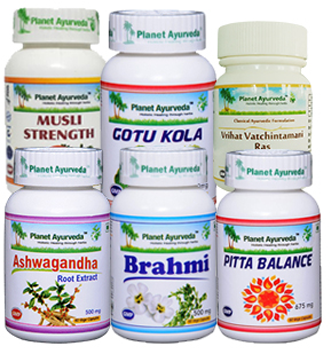 Brahmi (Bacopa monnieri) is a very useful herb that helps in increasing the coordination between the functioning of brain neurons. It also helps in enhancing memory. Brahmi as a herb helps in reducing stress, anxiety, mood swings and irritation by keeping your mind calm.

These capsules are made from the extract of Withania somnifera. This particular herb has very unique properties and hence it is also called as king of herbs. It helps in removing toxins from the body, enhances vital organ functioning, behaves as a stress buster, provides nourishment to the body muscles, tissues and cells. It also helps in pacifying vata dosha and is very useful in reducing symptoms in case of MSA.

It contains herbal extract of akik pishti, jawar mohar pishti, praval pishti and many more. These all help in maintaining healthy digestive fire and pacify pitta which is the fire element of the body.

Dosage: One capsule twice a day after meals.

Dosage: one capsule twice a day after meals.

Gotukola is known as centella asiatica scientifically. This herb shows impressive results in maintaining muscle health because it contains vitamins like vitamin A, B, E and K along with magnesium.

Dosage: One capsule twice a day after meals.

It is a classical formulation that contains swarna bhasma, loha bhasma, mukta bhasma etc. These ingredients together behave as a nerve tonic is very helpful in boosting immunity.

MSA is a rare condition which makes its management a little challenging. People should not avoid any unusual symptoms they notice in their bodies or in their behaviours because such ignorance makes conditions like MSA difficult to even manage. The herbal products offered by Planet Ayurveda in this condition are made from the best quality of herbs and do not cause any side effects. In case of any query kindly visit www.PlanetAyurveda.com