Adrenal glands are the endocrine glands (glands that secrete hormones), located above the kidneys. Each adrenal gland is composed of cortex and medulla. The cortex part of the adrenal gland is responsible for the secretion of steroids hormones that includes mineralocorticoids such as aldosterone that aids in maintaining blood pressure and water-electrolyte balance in the body, glucocorticoids such as cortisol that helps in regulation of metabolism and the last set of hormones include androgens which are the precursor of sex hormones. Also, the medulla is involved in releasing the catecholamines such as epinephrine or norepinephrine hormones which are important in tackling the stressed condition. These hormones are very much required by our body for proper functioning. But a number of endocrine disorders involve the dysfunctioning of adrenal glands. One of such diseases is Addison’s disease. In this article we are going to discuss this disease along with the best possible treatment for it according to Ayurveda.

Addison’s disease also known as hypocortisolism or primary adrenal insufficiency is a rare chronic endocrine disorder which is characterized by inappropriate or inadequate production of steroidal hormones particularly cortisol and aldosterone. Clinical manifestations may come slowly and may include abdominal pain and abnormalities in gastrointestinal tract, weakness and weight loss etc. This condition can lead to life threatening emergencies like adrenal crisis. This disease is diagnosed by blood and urine tests along with medical imaging techniques.

The initial symptoms of the disease could be non-specific including nausea, fatigue, darkening of skin and sensation of dizziness on prolonged standing and mood changes.

In later stages some patients may experience pain in their abdomen or muscles. The signs involving the whole body are dehydration, fainting, light-headness, loss of appetite, reduced blood pressure, sweating issues and water and electrolyte imbalance etc. In a few cases some gastrointestinal symptoms such as nausea or vomiting can be seen. Also, apart from these clinical features dysregulation or even absence of menstruation is found in females, excess micturition, loss of consciousness, and weakness in muscles, decreased sexual libodo, and craving for salty food items.

Two often possible causes of the disease is damage by an underlying autoimmune disease (i.e. body’s own immune system attacking the cells of adrenal glands), and tuberculosis. Other causes may include sepsis, certain allopathic medicines, bleeding in adrenal glands. Also, the secondary adrenal insufficiency is associated with reduced CRH (Corticotropin-releasing hormone) released by hypothalamus or ACTH (Adrenocorticotropic hormone) which is produced by the pituitary gland.

In Ayurveda, this disease is considered to have originated due to the rasa dhatu kshay. In humans, due to the weakening of jatharagni (the supreme digestive fire), will result in the reduced dhatu agni (the energy required for the metabolism of bodily tissues) and this decreased dhatu agni results in the failure in the formation of adequate rasa dhatu (the precursor of the hormones and other bodily fluids), the features of rasa dhatu kshaya (deficient rasa dhatu) by Acharya is given as

Due to the deficiency of rasa dhatu, ghatte shete shabdam- there is decreased tolerance to listen, and hridayam tamyati svalpachesteyapi-on doing a little amount of work the patient may feel palpitations, (due to the reducing of blood pressure), felling of darkness in front of eyes & shosh – dehydration, trishna-excessive thirst (due to water-electrolyte imbalance), klam- fatigue, decrease in the formation of other bodily fluids.

Planet ayurveda is an herbal manufacturing unit that is globally emerging and global distributor of herbal medicines that are being formulated with strict adherence to ayurvedic texts with ancient time-tested formulas. These herbomineral products that are made here are of 100% natural origin. Formulations are made under the guidance of an expert team led by a group of experienced ayurvedic physicians. 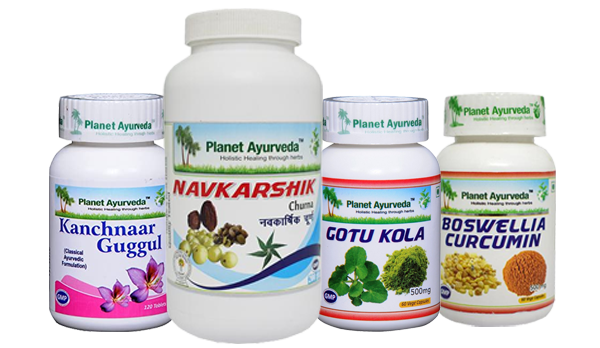 The churna is a classical polyherbal blend made for the better detoxifier of blood and system. The ingredients include the combination of immune modulating drugs such as giloy (Tinospora cordifolia), daruhaldi (Berberis aristata), vacha (Acorus calamus) along with the blood purifying actions of neem (Azadirachta indica), manjistha (Rubia cordifolia) and the body detoxifying agents such as triphala (combination of three herbs- Terminila chebula, Terminalia bellerica and Emblica officinalis) along with katuki (Picrorhiza kurroa). These herbs in combination aid in eliminating the endotoxins from the body and blood and also side by side provide strength to the immune system for tackling the auto-immune causes in Addison’s disease.

These capsules are the single herb preparation made from the standardised extract of Mandukaparni (Centella asiatica), mandukaparni is the ancient nervine tonic used for treating various mind related illnesses. It helps in enhancing/maintaining the secretion of CRH and ACTH hormones, also strengthen the nervous system thus providing relief in fainting and other such symptoms associated with Addison’s disease.

This product is the best ancient formulation mentioned in Ayurvedic texts for the inflammatory conditions. This drug is the combination of kanchnar (Boerhavia diffusa) along with guggul (Commiphora mukul) and other ingredients. In this disease this medicine is added to maintain the overall hormonal balance of the body.

This is the best combination medicine made by the experts of Planet Ayurveda with a combination of Boswellia serrata (shallaki) and Curcuma longa (haridra). This medicine helps in enhancing the texture of the skin i.e., reducing the darkening of the skin in Addison’s disease also the medicine is full of antioxidant properties that help in improving the sepsis related causes of the adrenal insufficiency and fasten up the healing process.

The Allopathic treatment methodology is based on steroids to reduce down the symptoms caused due to adrenal glands’ insufficiency, also aimed on injecting the synthetic hormones externally that are being deficient due to the ongoing Addison’s disease, which can cause several hormonal imbalances in later stages of the life. Whereas Ayurveda, being a science of life having an holistic approach of treatment, focuses on treating the patients with herbal medicines along with life and dietary modifications. Ayurveda is the best choice to rely on effective and relatively lesser side effects for Addison’s disease.