Bernard-Soulier syndrome is a blood disorder that disturbs the normal functioning of our platelets. Platelets or thrombocytes are small and colorless cell fragments present in our blood that helps in forming the clot and preventing excessive bleeding. Macothrombocytopenia is the main factor meaning enlargement of the platelets resulting in the syndrome and resulting in various bleeding disorders. Through this article, we are going to throw light on this rare blood disorder and how you can manage it through Ayurvedic medicine. 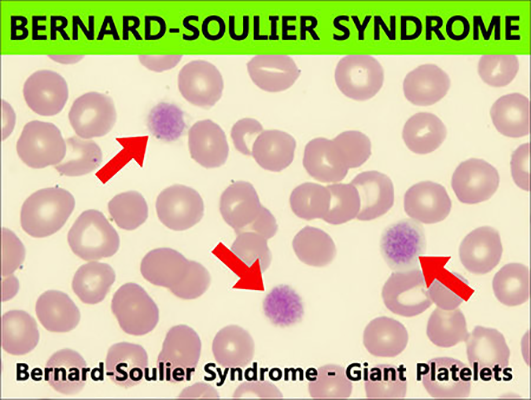 Bernard-Soulier syndrome is a rare genetic disorder that is inherited from parents. It results in the formation of a few platelets that are larger in size leading to improper function of the body. There are three main symptoms shown in this disorder that is increased bleeding, low platelet count, and abnormal size of platelets which are larger in size. This causes bruising all over the body and every little injury causes them to bleed easily. This causes prolonged bleeding after surgery which leads to a life-threatening situation. Small and tiny spots of blood can also be seen under the skin known as petechiae and it’s very rare to find in people. Women are most likely to be affected by Bernard Soulier’s disorder as compared to Men.

The symptoms that are seen in this disorder are typically present from birth and seen throughout life and the common signs seen are:

Cause for Bernard Soulier Syndrome

It is caused due to the mutation of a specific gene called GP1BA, GP1BB, or GP9 which is responsible for causing Benard Soulier syndrome. The mutation occurs only in one of the genes, not all the genes. These genes are responsible for producing a protein that combines to form glycoprotein, found on the surface of platelets, and plays an important role in clotting the blood.

There are various blood tests which will help in the diagnosis of the syndrome and the cause behind excessive bleeding. This includes a certain blood test which helps to show the abnormality present in the blood cells and the total number of large immature platelets present in the blood. Flow cytometry is one of them which helps in finding the number of glycoproteins present on the surface of platelets. This helps in confirming the diagnosis and also other bleeding disorders.

According to modern science, the treatment for this syndrome depends on the symptoms presented by the patient. The most common treatment is platelet transfusion and this can also cause excessive bleeding resulting in a life-threatening situation. This treatment gives temporary relief and may also result in other side effects.

Ayurveda gives treatment on the basis of disturbed Dosha, while it’s a genetic disease it cannot be cured but can be managed through herbal medicine. Herbal medicine will give the patient a healthy life and other ailments related to the disease can also be reduced.

Planet Ayurveda provides 100 percent pure herbal medicine that is natural and vegetarian. All the herbal formulations are made under the supervision of an MD Ayurvedic Doctor and each of them is clinically tested. They all are free from chemicals, preservatives, and additives making them safe to use and free from all kinds of side-effects. Here are some of the herbs which will help in treating the Bernard Soulier syndrome and this includes: 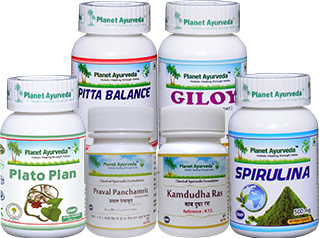 It is prepared from the single herb called Giloy (Tinospora cordifolia). It contains antioxidant, anti-inflammatory, and antipyretic properties making it useful for any kind of bleeding disorder. It is also useful in making the immunity stronger and preventing the body from infection.

This is prepared from blue-green algae known as Spirulina (Spirulina platensis) which is full of minerals, vitamins, and other nutrients. Spirulina is a rich source of vitamin B12 which is useful in forming hemoglobin and maintaining the levels of healthy blood cells.

It is the herb that helps in balancing the Pitta and is formulated with minerals like Parval Pishti, Akik Pishti, Jawar Mohra Pishti, and many more. This herbal remedy helps in treating ailments like weakness, excessive bleeding, fever, etc. It is also very useful in balancing blood pressure and reducing palpitation.

This one of the classic and excellent Ayurvedic formulations made from Sukti bhasma, Parval Bhasma, Mukta bhasma etc. This helps in managing the urinary and digestive function and also helps in balancing the Vata as well as Kapha dosha. All this helps in making the body healthy and reducing the blood-related disorder including Bernard Soulier syndrome.

It is a classic herbal remedy balancing the Pitta Dosha and reducing bleeding disorder. This includes Kamdudha Ras, Abhrak bhasma, and many more which help in reducing excessive bleeding during menstruation which is very commonly noted in this disorder.

It is one of the excellent herbal formulations helping the body to increase platelet count naturally. This helps in increasing the functioning of bone marrow and making the body healthy. It also helps in reducing infection from the body.

Above mentioned are all the information about this rare disorder called Bernard-Soulier syndrome. It is a dangerous disease but it can be managed through herbal medicines as mentioned above provided by Planet Ayurveda. This will help you to manage a healthy lifestyle without causing any side effects.