Klebsiella Pneumonia is a pulmonary condition which is the result of klebsiella  pneumoniae infection. Klebsiella pneumoniae is a bacteria that is usually found in the gut of humans but if it travels to other organs of the body then produces severe infection and also symptoms associated with the particular system appears. In this article we will particularly discuss klebsiella pneumoniae, how it can cause pneumonia in humans, about the symptoms that will systematically appear and also regarding the management that can be done using various ayurvedic formulations.

The bacteria usually lies in your intestine and does not cause any other infection but if it travels to any other part of the body then its treatment is quite tough because it is mostly more resistant to antibiotics than E. coli and hence is of more grave prognostic significance. Diabetes and others that have reduced defenses are particularly vulnerable. This bacteria is capable of penetrating the human gut wall and can travel to distinct organs and thus is responsible for causing infections.

As mentioned above, K. Pneumoniae is a well known cause for pneumonia and particularly causes lobar pneumonia. The disease tends to occur in fifth to seventh decades of life and is particularly apt to develop in debilitated individuals. Apparently the bacteria invades the lungs by aspiration of bacteria laden saliva. Klebsiella was named after the german microbiologist Edwin klebs. 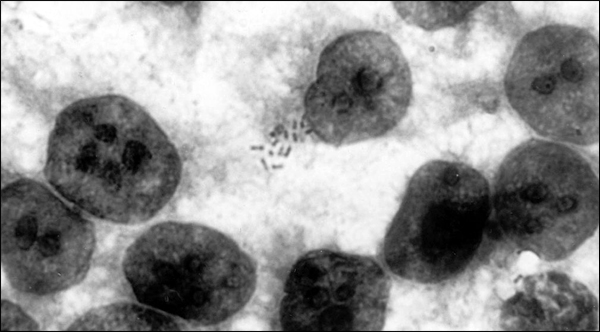 Among the various klebsiella bacilli, k.pneumoniae (Friedlander’s bacillus) is the most important pathogen for man, causing principally lobar pneumonia. It too is a gram negative coliform bacillus that is normal inhabitant of the mouth and gut. It just looks like Enterobacter aerogenes and has many stains. It is elaborated  as bacteria having a large polysaccharide mucoid capsule which often imparts a slimy character to the suppurative exudate it evokes. The heavy mucoid capsule is an effective defense against phagocytosis and contributes to the virulence of this organism. This organism is best known to cause respiratory pathology but can also cause urinary tract infections too. It is attributable to uncommonly, suppuration in the sinuses, middle ears, mastoids and meninges.

This bacteria can not spread through air so it needs a mode of transmission. Mode of transmission may include transmission through blood, IV catheters or wounds. Also the patients that are having low immunity are more at risk of getting infected and thus developing pneumonia.

The lobar pneumonia is marked by acute inflammatory exudation in the lung that is responsible for extremely sudden onset of respiratory symptoms. Wide spread consolidation of the lung parenchyma ensures within the first few days, which may be limited to a portion of a lobe but more often affects the whole lobe or multiple lobes. The affected regions are solidly filled with exudate, and the lung has the solidified ‘plaster cast’ appearance similar to that seen in pneumococcal pneumonia. The pleural surfaces are consistently covered with fibrinosuppurative exudate. One of the key characteristic features of klebsiella pneumoniae is production of numerous small focal abscesses. .

Pneumonic consolidations are characterized by filling the alveoli with a mucoid suppurative exudate heavily laden with a large number of encapsulated bacilli.

Pulmonary conditions are having a tendency to begin with the onset of chills, fever, pleuritic pain, cough and the expectoration of a copious amount of at first sanguineous, then frankly sanguinopurulent, mucoid sputum. When the consolidation is widespread, shortness of breath, dyspnea and cyanosis may become evident within the first 48hours of disease.

In modern times the generally prescribed medications are antibiotics and many research materials have shown phage therapies as its treatment.

The first and the foremost cause for the development of this condition is dhatu kshaya that ultimately leads to the weakening of body defenses. So this condition can be understood as the dhatu kshaya janya agantuja jwar. Reason to compare it with so complexity is due to the involvement of klebsiella bacteria (agantuja factor) and klebsiella affecting the body due to low immunity (dhatu kshaya causing least vayadhi kshmatva). The symptoms particularly present in this condition are fever that too with chills, bodyache, uneasiness, distaste in mouth, anorexia and excessive thrust. The agantuja factor involved in this condition primarily affects lungs (the fufusa) and then onset of fever takes place. 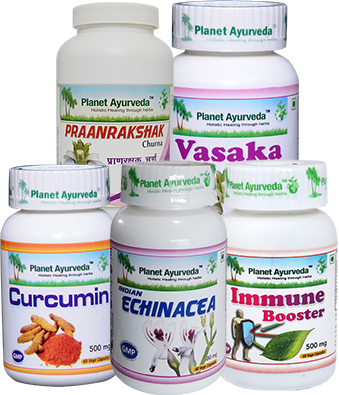 Planet Ayurveda is a leading herbal firm that deals in the manufacturing and distribution of totally herbal products. These range of products are very much capable of managing many conditions. The products that can be used for the management of klebsiella pneumonia are

Curcumin capsules are manufactured using standardized extract of  haridra (Curcuma longa). This herb is very much potent in fighting infections and also increases the immunity of the body. It reduces symptoms like pain and shortness of breath by reducing the inflammation in the lung lobules. It also has antioxidant properties thus protects lungs from free radical damage.

Adhatoda vasica (vasaka) behaves as antitussive in this case and works as an expectorant. This herb has excellent antimicrobial, anti-bacterial and anti-viral properties and thus works effectively in reducing inflammation. It also helps in protecting lung parenchyma and reduces damage caused by klebsiella

This formulation is prepared using Indian echinacea is called as kalmegh in ayurveda. It is having impressive properties that are of great use in this condition. It helps in reducing pyrexia and inflammation such as in bacterial pneumonia. It tends to show excellent anti viral properties along with that it acts as an immunomodulator.

This formulation is especially formulated to manage a healthy defense mechanism in the body so as to protect the various systems including respiratory system from harmful effects of klebsiella like bacterias. This formulation has Bhumi amla (Phyllanthus niruri) and Amalaki (Emblica officinalis), cow colostrum and grapeseed (Vitis vinifera) as its constituents.

Praan rakshak churna as the name suggests is formulated exclusively for the management of respiratory symptoms like expectoration, cough, breathlessness and many more. It also helps in healing the inflammation in the respiratory tract.

Dose: One tsp twice a day after meals.

Klebsiella pneumonia is a fatal condition and must be diagnosed correctly when a patient represents with the symptoms. Delayed diagnosis can affect patients’ lungs really bad and the condition can become serious. The medications offered by planet ayurveda for the management of this condition are totally herbal and do not cause any side effects. These Medications are safe to be used for a long time and are effective in boosting your immunity as well.