Pantothenate kinase-associated neurodegeneration (PKAN) is a rare nervous system disorder which was also formerly known as Hallervorden-Spatz syndrome. Its manifestation starts from childhood itself, a child presenting with difficulty in movement. With passing time this difficulty in movement gets worse. Rigidity, spasms in involuntary muscles, the problem in walking, these are the major characteristics of PKAN. Trouble and speech and loss of vision are also observed in many of the patients affected by this disorder.

Not only physically but PKAN affects the patient mentally as well by causing dementia, depression, and behavioral problems. In this disorder, the main pathology is the degeneration of the brain and building up of the iron in certain areas of the brain. PKAN is basically presented in two forms first is classic in which the symptoms appear within the first ten years of patient’s life and complaints get worse rapidly while the other one is atypical which is of slow-progressing nature and complaints appear after 10 years of life gradually. Pantothenate kinase-associated neurodegeneration is an inherited disease that is passed through autosomal recessive genes. There occurs mutations in these genes and transferred to manifest as a disease.

One main characteristic of this disorder is that there appears a peculiar ‘eye of the tiger’ sign when seen on MRI (magnetic resonance imaging) scans of the PKAN patients. Psychiatric and speech problems are more often associated with atypical PKAN as compared to the classic one. HARP, i.e. Hypoprebetailpoproteinemia, acanthocytosis, retinitis pigmentosa, and pallidal degeneration is also a part of PKAN however earlier it was considered as a separate disorder. But occurrence of HARP is very rare as compared to the classic PKAN. 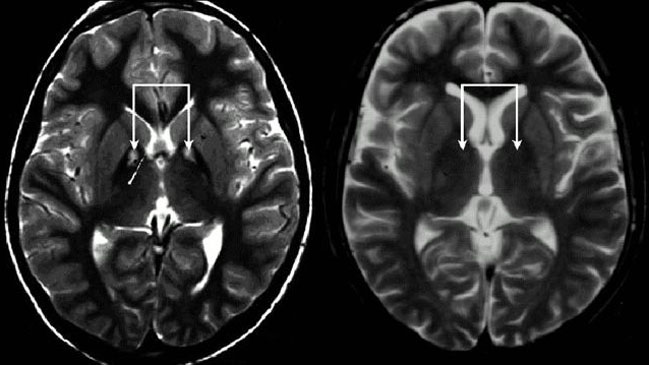 Depending upon the types of PKAN , i.e. classic and atypical the signs and symptoms, frequency, and intensity may vary. As mentioned before in classic PKAN the complaints appear in the early 10 years of childhood and develop at very fast pace.

These signs and symptoms include

It is an inherited disease that develops due to the transfer of the mutated genes to the offspring. Due to the abnormal mutation of specific gene PANK, certain enzymes required are not produced due to which there occurs abnormal building up of the abnormal compounds in the brain. The presence of these harmful compounds leads to damage to the tissue and swelling which eventually causes an abnormal iron build up in the brain.

Diagnosis of a genetically inherited disease has always been difficult and full of challenges. The patient’s medical and personal history, signs and symptoms, physical examination and lab tests may direct towards PKAN, and than the doctor may advise for further genetic testing which confirms the diagnosis.

There is no exact treatment for PKAN and usually, the symptomatic treatment is given to the patient. There are certain medications for dystonia and muscle spasms, surgeries for removing certain part of the brain that is causing dystonia but it is only temporary, deep brain stimulation and physical therapies are also done to relieve the certain problems related to this disorder.

However Ayurveda can also be a great option if patent wants to take natural medicines that are effective to treat these problems, the effect is long-lasting and does not pose side effects even when taken for a long time. Ayurveda is the science of life which was originated much before the other modes of medicines. Ayurveda can help in treating the disease with the medicines made from natural herbs and mineral compounds.

Planet Ayurveda is an emerged herbal company that deals with the pure herbal medicines prepared from the best quality of herbs as per the ancient Ayurvedic literature. These medicines are free from any type of chemical, additives, and preservative, and fine quality of herbs are used in them which makes them high in quality. Treatment of various chronic and typically complex diseases are done with these amazing herbal medicines which are prescribed by the Expert MD Ayurveda Doctors.

For PKAN also Planet Ayurveda offers a set of herbal medicines that helps in managing and treating the disorder and its associated complaints. 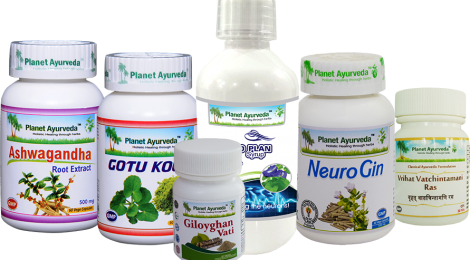 Herbal Remedies offered by Planet Ayurveda for PKAN are

These are the single herb capsules prepared from the standardized extract of Withania somnifera (Ashwagandha). Ashwagandha is full of amazing therapeutic properties which makes it a choice of the herb in treating various ailments. Ashwagandha capsules give strength to the body, both mentally and physically. In PKAN these herbal capsules help by giving strength to muscles, treating involuntary spasms, troubled movements, and also helps in managing psychiatric complaints as well.

These are also single herb capsules that are prepared from the standardized extract of Centella asiatica (Gotu kola). These wonderful herbal capsules work by supporting healthy blood circulation throughout the body, maintaining a healthy metabolism and healthy functioning of the brain. Gotu kola capsules balance all three doshas in the body, i.e. Vata, Pitta, and Kapha dosha.

As the name suggests these amazing herbal tablets help in balancing the Vata dosha in the body and prevent and treat any disease which is caused due to imbalance of this dosha. Neurological Disorders are one of the diseases caused due to Vata disorder hence help in treating it. It is prepared from a combination of various bhasmas like Swarna bhasma, Rajata bhasma, Loh bhasma etc.

These are the single herb capsules prepared from Guduchi or giloy that have multi medicinal action on the body like anti inflammatory, anti pyretic, healing etc.

These polyherbal capsules are prepared from a promising combination of herbs like Brahmi and Ashwagandha. Both of them are known are general health tonic and synergistically helps in treating mental as well as physical anomalies.

This is the amazing blend of herbs like Brahmi, Mandukparni, Shankhpushpi, Jyotishmati, Ashwagandha, Bhojpatra, etc. These all herbs have therapeutic action on the brain which helps to treat various neurological disorders.

PKAN can be managed and its associated complaints can be treated naturally with the help of combination of herbs that therapeutically heals the nervous system and can prevent the progression of the disease to certain level.