Ayurvedic View On Parkinson’s Disease And Its Treatment

Parkinson’s disease is an accelerating and degenerative nervous condition that affects all the movements in our body. Common distinguishing features of parkinsonism are tremors, stiffness, imbalance and lack of coordination. In this study we are going to discuss the causes of parkinson’s disease, their symptoms, ayurvedic view and how we can cure parkinsonism with ayurvedic treatment and the treatment option for parkinsonism by planet ayurveda. So if any of you or the person you know is suffering from this condition then there is no need to worry in this article you will learn wonderful panchkarma treatment and herbal remedies that will make you get rid of this condition.

Parkinson’s disease is also known as parkinsonism and it is an age related neurodegenerative condition which affects the nerve cells in the deeper parts of the brain that are the substantia nigra and the basal ganglia (responsible for dopamine production) which is responsible for transferring messages for controlling the body actions. It is the second most age-related neurodegenerative condition. As per ayurveda it can be correlated with vepathu that occurs due to vitiated vata dosha. In further study we will discuss the causes and symptoms of parkinson’s disease.

Other symptoms of Parkinson’s disease

As we discussed earlier the main cause of this age-related degenerative condition is loss of nerve cells. Mainly these nerve cells are producing the dopamine (The chemical messenger in our body) which helps in controlling and coordinating the body movements. So if the nerve cells responsible for producing dopamine degenerates then it’s obvious this will affect the movements of our body and slow down the body movements and lead to abnormal body actions.

The cause behind loss of nerve cells

The reason behind loss of nerve cells is not confirmed yet but it is sure that the degeneration occurs as the person grows older. There are certain conditions that may affect the nerve cells. Let’s take a look:

As per ayurveda Parkinson’s disease is correlated with vepathu or kampavata, it comes under vata vyadhi that is the neurological disorder according to ayurveda. According to acharya charaka, it is mentioned under vatajananatmaja vikara. As per Madhav acharya in vepathu roga there is shakiness in all body parts or shakiness in the head and even in any part of the body part it comes under vepathu roga.

As we all read earlier that it is one of the vata vyadhi so it’s obvious that the causes are also the same as that of vata vyadhi and now we are going to discuss that but despite that the main reason is dhatu kshaya.

So all of the above are the reasons that lead to vata dosha vitiation.

Treatment for Vepathu as per ayurveda

Shodhan Chikitsa: Under this treatment option various panchakarma therapies are mentioned that we are going to discuss below:

Planet Ayurveda provides a number of herbal remedies that provide great health benefits. All the herbal remedies are made under the guidance of M.D Ayurveda doctors with proper quality and quantity check. The formulations are free from any kind of synthetic material like gums, resins, preservatives, starch, fiber, etc. For the health issue of parkinsonism, planet ayurveda provides a parkinsonism care pack. This pack includes Let’s discuss this pack in detail. 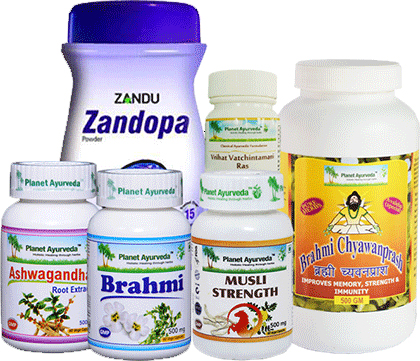 Brahmi capsules are a mono herbal remedy by planet ayurveda. It includes brahmi (Bacopa monnieri) as an ingredient. Brahmi is an ayurvedic herb which is helpful to cure symptoms of Parkinson’s disease. It improves brain circulation and improves cognitive functions, mood and other general neurological functions.

This formulation is present in the form of pills. It includes several ingredients like swarna bhasma (calx of gold), abhrak bhasma (calx of mica), rajata bhasma (calx of silver), loha bhasma (calx of iron), praval bhasma (calx of coral), mukta basma (calx of pearl), rasa sindoor (compound of sulfur and mercury), aloe vera (Aloe barbadensis) extract. It is the classical formulation which is very effective in balancing vata dosha which in turn prevents and cures parkinson disease as vata is the main cause of degeneration of nerve cells and causes kampavata (parkinson’s disease).

This herbal formulation is available in the form of capsules. It includes two herbs that are safed musli (Chlorophytum borivilianum) and gokshura (Tribulus terrestris). Safed musli (Chlorophytum borivilianum) is considered as a white gold (divya aushadh) in ayurveda. It is a great rasayana that helps in rejuvenating the nerve cells which in turn reduces vata dosha and is helpful in alleviating nervous symptoms. Gokshura (Tribulus terrestris) prevents the further deterioration of the cells and helps in alleviating cognitive functions and lack of coordination.

It is a herbal powder which is made up of a single herb named as kapikacchu (Mucuna pruriens). Kapikacchu helps in curing symptoms of Parkinson’s disease by balancing vata dosha and also due to ist neuroprotective action it promotes the formation of dopamine which in turn alleviate the symptoms of parkinson’s disease.

This herbal formulation includes only ashwagandha herb (Withania somnifera). This is also a great rasayana herb that helps in preventing the deterioration of the tissue cells or nerve cells and positively helpful in preventing symptoms of parkinson’s disease.

Parkinson’s disease is a neurological problem that is age related and progressive type and is considered under vata vyadhi as per ayurveda. The main cause is dhatu depletion which leads to vata dosha vitiation and which in turn causes deterioration of nerve cells and affects the production of dopamine-a hormone which is responsible for controlling all motor functions of the body. So if dopamine levels reduce symptoms like tremors, cogwheel or lead pipe rigidity, slowness of movements, loss of coordination and many more cognitive functions get affected. As per ayurveda Parkinson’s disease is correlated to kampavata or vepathu roga whose main clinical feature is kampan that is the shakiness of the full body or any part of the body. The treatment option is considered the same as the treatment of vata vyadhi that is snehana, swedana, basti, virechana and other vata alleviating samshodana chikitsa. Also along with that some aushadhis are there which are mentioned in this article. Also planet ayurveda is available with a parkinsonism care pack which includes several herbal remedies that are beneficial in promoting overall brain health and improving the quality of life of patients who are suffering from parkinson’s disease. If any querry visit www.planetayurveda.com