The human body has a pair of spongy organs called lungs present on each side of the thoracic cavity. The windpipe helps the air to get transferred into the lungs. Lungs have bronchiole which ends up in an air-filled sac called alveoli and from here the oxygen gets mixed up into the blood and oxygen is the main part of our life. Life without oxygen is not possible at all. The deoxygenated blood is carried through the pulmonary artery. The main pulmonary artery is the largest artery that comes from the heart and ends up in the capillaries. When this artery is blocked due to some thrombus it causes embolism.

Firstly, we need to know that embolism is an intravenous mass meaning that this mass is occurring inside the blood vessels and thrombus is the solid mass present in the deep veins. So, embolism caused due to thrombus is known as thromboembolism. Hypoxemia is one of the condition which may be presented in association or as a result of thromboembolism where the levels of oxygen are decreased in the blood. Now that we have discussed thrombus, embolism, and hypoxemia we also need to know in detail what is Pulmonary thromboembolism? Let’s have a look at basic human physiology to understand it better. 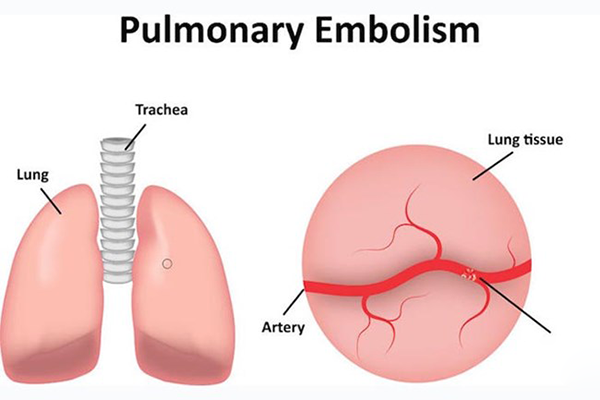 Now, when the blood clot in any vein is eventually going to end up in the right side and the right side of the heart will pump the thrombus into the pulmonary artery causing the embolism. Due to the effect of gravity, the blood typically has the tendency to flow downwards more as compared to the upper half of the body. This is one of the reasons that you are gonna see thromboembolism originating from the lower portion of the body being transferred through bloodstream to the lungs & causing pulmonary thromboembolism. 99 percent cases of embolism originate from a thrombus.

Depending on types of matter it may present in liquid, solid and gaseous forms. Depending on the infection there are two types called septic caused by a bacterial infection and another is bland embolism formed due to cancerous tumor growth.

Depending on the source they are cardiac embolism where it is caused due to clot in the heart, venous embolism where veins are affected very commonly seen in deep vein thrombosis and lymphatic embolism which is very rare to find.

According to the flow, there are two types: one is Paradoxical where the thrombus goes from vein to the artery and another is retrograde where the vein is obstructed.

Pathogenesis of the Thromboembolism (Venous Origin)

The pathogenesis of this disease usually begins from the lower portion of the body as discussed above. Firstly there will be a deep vein thrombosis. Then from there, the thrombus will get detached from the site where it has originated and will be carried along with the blood which will end up in the right atrium. From where it will go to the right ventricle which will then travel into the pulmonary trunk causing pulmonary thromboembolism. There could be two circumstances that can happen that is the thrombus is very large that it will be obstructed into the bifurcation of the pulmonary artery. Another is that the large thrombus may break into small pieces that are multiple in numbers and will travel through the blood leading to obstruction in the lower lobes of the lungs.

How Hypoxemia is Related to Pulmonary Thromboembolism?

Well as we have discussed above that our bloodstream is responsible for exchanging gases. The obstruction or thrombus in the pulmonary artery causes the blood to pump slowly. The cardiac output becomes very low which further increases the demand for oxygen in the blood. The system is not able to fulfill the demand due to the thrombus which decreases the amount of oxygen in the blood leading to hypoxemic condition.

One of the main reasons to develop thromboembolism is deep vein thrombosis which causes the veins to obstruct. The obstruction mainly starts from the lower limbs. Other causes may include

There are couples of clinical methods that will help in diagnosis 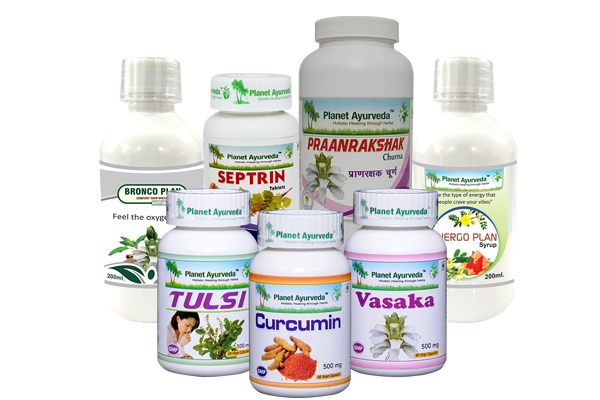 This herbal remedy will help you balance all the three Dosha (Vata, Pitta, and Kapha). This will help to reduce the inflammation present in the cells of the airway. Consumption of this medicine will reduce the tightness feeling in the chest and removes mucus from the respiratory tract.

It contains the pure herbal extract of Tulsi (Ocimum sanctum) which contains anti-allergic and anti-microbial properties. It is very useful in reducing the size of tumors and removes blood clots. It helps in building immunity and fighting infection. Very useful in influenza, flu, and other respiratory-related disorders.

It contains the herbal extract of Curcumin (Curcuma longa) which belongs to the family of ginger widely used in both Ayurvedic and Chinese medicines. It contains anti-inflammatory and anti-cancerous properties. Due to its property, it is useful in stopping the growth of tumors and reduces inflammation. It acts as an antiseptic which reduces the risk of septic type embolism.

It is the combination of herbs like Shirish (Albizia lebbeck), Kantkari (Solanum xanthocarpum), Dalchini (Cinnamomum zeylanica) and many more. All these have proven to be the best medicine for lungs and its disorders. It is useful in common cough and cold, Bronchitis, Pneumonia etc which makes it a very excellent remedy for pulmonary embolism.

It is made from the herb called Vasaka (Adhatoda vasica) is one of the best remedies for respiratory disorders like pulmonary embolism, bronchitis, common cold, and cough. This will help in removing any kind of obstruction present in the pulmonary artery.

This syrup is a herbal formulation of best herbs like Madhuyashti (Glycyrrhiza glabra), Pippali (Piper longum), Maricha (Piper nigrum), Sonth (Zingiber officinale), and many more. All the herbs are the best formulation for breathlessness, chronic lung infection and this syrup causes no drowsiness. Daily consumption of this medicine will give strength to the lungs.

This is the formulation of Amalaki (Emblica officinalis), Gokshura (Tribulus terrestris), Shigru (Moringa oleifera) etc. it will give strength to your body and stamina. This syrup helps to rejuvenate the tissues and free the body from any kind of thrombus.

All are the information about Pulmonary Thromboembolism Hypoxemia and above are the Ayurvedic medicine provided by Planet Ayurveda. Consumption of these herbal remedies will help you to treat the disease as lungs are the organ which helps you to live and breathe fresh air. So, it’s our prime duty to take utmost care of our lungs.