Chylothorax is a condition which is having a particular characteristic of abnormal accumulation of chyle. Chyle is a milky fluid that contains fat droplets. These are drained from the lacteals of the small intestine into the lymphatic system during digestion. When this chyle is accumulated in the space surrounding the lungs it is termed as chylothorax. It is a rare but serious condition as it signals the leak of thoracic duct or one of its tributaries. Most of the pleural effusion (collection of fluid in pleural cavity) cases have serous fluid accumulated but only two to three percent represents chyle. In this article we will be discussing the causes, signs and symptoms, types, mechanism, diagnosis and treatment of  chylothorax.

In Chylothorax, the word chylo is derived from a Greek word chylos that means juice and in medical terms thorax represents lung area. The leakage of chyle through the thoracic duct is very common after thorax surgeries or in association with thorax tumors, after congenital cardiac surgeries and even after esophageal surgeries. For this condition there is no prediction of sex or age, it can happen to anyone weather a male or a female, children or adult. Early complications in these cases are cardiorespiratory and volemic disturbances.

There are three causes of chylothorax:

The symptoms depend on the age, volume of chyle, presence of underlying cause etc. Small chylothorax may not cause any symptoms but are only detected when a chest X-ray is performed. In the case of large chylothorax breathlessness is the earliest symptom noticed. The breathlessness is even present at rest. Patients will feel pressure on the side of the chylothorax. This pressure or tightness is felt due to the restriction of fluid that does not allow lungs to expand while breathing. But if the chyle deposition or accumulation has taken place slowly then lungs might build the capacity to get used to it. Fever and chest pain are generally not the signs present in this case due to the absence of any inflammation.

When we auscultate, low breathing sounds on the affected side are noticed. It is also associated with a dull sound on percussion. Large chylothorax can cause malnutrition, low immunity, drop in blood volumes and also low blood pressure.

This type of chylothorax is usually the complication of the surgery associated with thorax, heart and esophagus. It is the most common complication of pneumonectomy and also of the surgeries that require mediastinal dissection. After pacemaker implantation, embolization of pulmonary arteriovenous malformation, chyle accumulation around lungs is commonly noticed these days. Even after the blunt trauma to the chest region and also blast injuries are responsible for causing chylothorax. Surprisingly small injuries due to sneezing and coughing causes chylothorax.

This type includes malignancies commonly. Lung cancer, kaposi sarcoma, secondary lung cancer,esophageal cancer are the commonest causes of non traumatic chylothorax. Sometimes in the rarest cases this condition can be associated with the congenital lymphatic system malformations. In both the cases whether traumatic or non traumatic there is obstruction or destruction of the thoracic duct that causes chylothorax.

Most commonly chylothorax is diagnosed through X-ray. It appears as a dense, homogenous area that behaves as an obstruction for costophrenic and cardiophrenic angles. In some cases fluid samples can also be taken from the chest and serological study is done to confirm malignancy.

Usually the primary cause is to be treated first. If the condition is the result of duct leakage after surgery then ligation of the thoracic duct is done (by performing one more surgery). In case of non traumatic conditions the primary cause is to be diagnosed by observing the patient and performing certain tests that should include chyle aspiration and serological study. If we talk about conservative treatment then it includes thoracentesis and indwelling catheter use.

In ayurveda it can be understood as a pranavaha srotas vyadhi. The main causes that are told by acharya charaka are as follows

Acharayas mentioned vamana, nasya, dhoomapana, snehana, swedana and virechana therapy as the treatment in pranavaha srotas vyadhi. They also mentioned some medication for formulations like shwas kuthar rasa, trikatu churna, vasa ghrita and many more for the management of pranavaha srotas conditions. 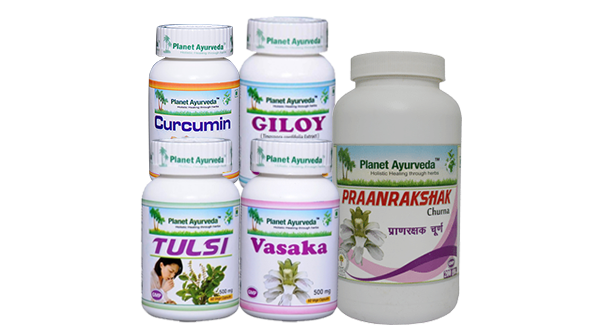 Planet Ayurveda also offers some of its formulations that are very useful in managing conditions like chylothorax. These Medications are totally herbal and cause no side effects. The medications or formulations offered are as follows

Dose: One Teaspoon twice a day after meals.

The formulation is a single herb formulation that contains Adhatoda vasica. Vasaka helps in pacifying kapha, reduces the breathlessness by clearing bronchial spaces.

Curcuma longa or curcumin (haridra) is an effective herb that helps in preventing and managing respiratory infections. It also helps in removing accumulated toxins by acting as an antioxidant. It has an antiseptic nature and purifies blood.

Tulsi (Ocimum sanctum) is a herb that is known from ages for its antimicrobial properties. It also has antifungal, antiseptic and anticancer properties. It is very useful in patients with chylothorax due to associated cancerous conditions.

This herb has antipyretic and anti inflammatory properties. It helps in building a strong immune system. In chylothorax, if a person suffers from compromised immunity due to excessive amount of chyle then this herb can behave as a blessing.

Chylothorax is a rare condition, if it develops it is very difficult to manage it without surgery. Moreover it is having a typical nature of causing no symptoms while in small amounts makes it more difficult to diagnose it. The herbal formulations offered by planet ayurveda are very effective in managing this condition without causing any kind of side effects. In case of any query kindly visit www.PlanetAyurveda.com