Acharya Sushruta in his Ayurvedic creation Sushruta Samhita had beautifully described the importance of blood by quoting “tasmaat yatnen sanrakshaya Rakatam jeevam iti sthiti” (Ref. Sushruta sutra 14) means Blood is life and its loss must be prevented by utmost priority basis. Various bleeding disorders which are responsible in heavy blood loss and may even lead to life threatening consequences. In this article, we are going to discuss one such disease, ITP in detail including its causes, symptoms, types, diagnosis and herbal treatment along with some dietary advice for ITP patients. 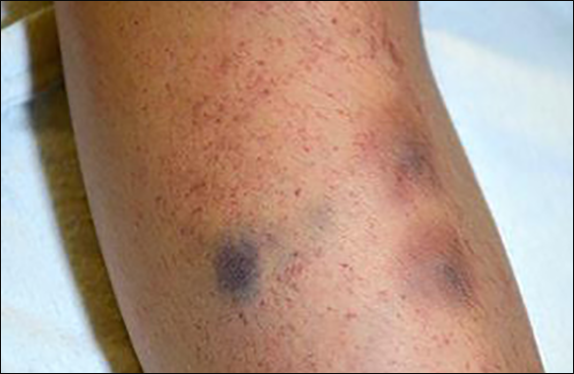 Idiopathic thrombocytopenic purpura is a disorder usually with the presence of excessive bleeding and bruising as blood doesn’t clot normally due to low levels of platelets in blood. Reddish-purple rashes and purple bruises may be seen in this disease. At present, idiopathic thrombocytopenic purpura is more commonly known as Immune thrombocytopenia (ITP). Normally, our Bone marrow produces platelets that stick together and form a clot at the site of the cut to stop bleeding. But, if our blood doesn’t have a required number of platelets, the process of clotting and stoppage of internal bleeding / bleeding under or on the skin becomes very slow.

There are mainly two types of ITP:

The exact cause of the disease was not well known before that’s why the term “Idiopathic” was used in the former name of disease. But now, it comes to the forefront that the immune system is mainly involved in ITP development. Thereby, this disease is newly named as Immune thrombocytopenia.

In children, ITP usually occurs acutely following a viral infection whereas in adults it occurs over a specific period of time.

Causes of ITP can be classified as primary and secondary. In primary causes, ITP develops on its own. In secondary causes, ITP develops alongside other conditions such as cancer, pregnancy, taking several medications, chronic infections and autoimmune disorders. ITP is a non-communicable disease i.e. it can’t be transferred from one person to another.

Most common symptoms of ITP include:

ITP can be diagnosed within the laboratory. If someone feels like he is suffering from any or more of the above mentioned symptoms, he / she must consult the doctor. Here are some diagnosis methods for ITP:

Avoid using the counter drugs such as aspirin, ibuprofen, and warfarin which can affect platelet functioning. Avoid consumption of alcohol which can adversely affect the blood clotting. Decrease indulging oneself in heavy physical activities which can cause bleeding and injury.

These all above given herbs are used in treatment of ITP, but nowadays it is not possible for everyone to have access to these various herbs from the market or other sources. That is why, Planet Ayurveda brings combination of all these herbs in a single pack i.e., ITP CARE PACK to allow a cost and time effective consumption. Let’s take a look on Planet Ayurveda’s Itp Care Pack. These capsules are completely pure herbal preparations which contain the standardized and pure extract of certain herbs, Amalaki (Emblica officinalis), bhumi amla (Phyllanthus niruri), cow colostrum (Bovine colostrums) and grape seed (Vitis vinifera). This immune booster maintains a healthy immune system, digestive system, hepatobiliary system, respiratory system and also provides healthy skin. Due to the ingredients’ of herbal origin in this formulation, it does not give any kind of adverse effect to the body.

Due to multiple beneficial actions and properties, Ashwagandha (Withania somnifera) is globally used herb in the Ayurveda. Planet Ayurveda’s Ashwagandha capsules are made up of superior and standardized extract of single herb, Ashwagandha. It is very effective to balance the level of Vata dosha, also regulates Kapha dosha and supports proper equilibrium of Tridoshas. Ashwagandha capsules enhance the working of the endocrine system, reproductive system and nervous system also.

Guduchi or Giloy (Tinospora cordifolia) helps in keeping proper balance between all three doshas of the body. Giloy capsules by Planet Ayurveda consist of pure extract of herb Giloy in a refined and standardized form. These capsules give health to the blood-vascular system, nervous system, digestive system and immune system. The formulation is independent from starch, artificial colors and preservatives.

Dosage: 1 capsule, twice a day after having food.

Gandhak rasayan tablets are prepared in the Planet Ayurveda’s manufacturing plant. It is manufactured by using safe, pure and superior aspects of shuddha gandhak (purified sulfur). These tablets work by balancing Tridoshas (Vata, Pitta and Kapha) or body energies. It plays a major role in maintaining the blood vascular system and making our skin healthy. The cool potency of Gandhak Rasayan allows it to balance the vitiated pitta dosha in the body which will add on to its therapeutic properties i.e. it indirectly acts as a blood purifying agent.

Dosage: 2 tablets, twice a day after the meals.

These capsules are manufactured by using green herbs which are rich in nutrients and in combination fulfill the daily requirements of the body. This formulation is manufactured from superior quality herbs: Wheatgrass (Triticum aestivum), Green tea (Camellia sinensis), Amla (Emblica officinalis), Spirulina (Spirulina platensis) and Grape seed (Vitis vinifera). It also helps in providing a healthy body and mind to people of various ages.

Kumar Kalyan ras is the classical formulation of Ayurveda and to be commonly used for kumaras (children). It is assembled from various herbs and various types of minerals or their purified ashes. This formulation is manufactured by utilizing pure, safe and standard quality ingredients in the form of pills. It contains loha bhasma (iron ash), shuddha parada (purified mercury), abhrak bhasma (processed and purified mica), makshika bhasma (ash of copper-iron pyrite), Swarna bhasma (ash of gold), ghritkumari rasa (extract of aloe vera juice) and mukta bhasma (ash of pearl). It helps to promote and support the healthy functioning of the heart in children.

Brahmi (Bacopa monnieri) is extensively used in Ayurvedic formulations linked to disorders of the nervous system. Planet Ayurveda’s Brahmi chyawanprash is the multi herbo-mineral preparation available in jam form. It is prepared by using 28 ingredients that are having a positive impact on our body. Regular use of this product maintains stability in Tridoshas (Vata, Pitta and Kapha). Brahmi Chyawanprash is very much effective in maintaining healthy functions of the immune system and nervous system. It is beneficial for almost all body systems.

Dosage: 1 teaspoonful twice a day, after the food.

Planet Ayurveda’s Suvarna basant malti ras is a classical formulation containing various herbs and minerals. This formulation is prepared by using high standardized extracts of shuddha hingula (cinnabar in a purified form), Marich (Piper nigrum), Swarna bhasma (gold in an incinerated form), Kharpara bhasma (calamine in an incinerated form), Nimbu swarasa (lemon juice) and Mukta bhasma as bhavna dravya. This formulation regulates Vata and Kapha doshas in the body. It is named as Rasayan in Ayurveda, and helps to maintain proper functioning of the immune system and respiratory system.

A good diet is very helpful in preventing as well as treating ITP. Here is list of some foods to be eaten and foods to be avoided while suffering from ITP:

As this disease is combination of complex bleeding disorders due to altered immune response, thus symptomatic treatment such as use of immunosuppressant or steroid based drugs and lastly platelet transfusion are the only modalities of treatments left with the modern medicine which have a long list of side effects and that too provide relief for shorter duration with high chances of recurrence.

But, no need to worry, Ayurvedic medicines have no adverse effects and are successfully treating the exact cause of disease from its root, also enhancing immunity rather than suppressing it. Hence, there is a better scope of treatment of Immune Thrombocytopenic Purpura (ITP) patients with Ayurvedic medicines along with lifestyle & dietary modifications.