Ayurvedic View On Diabetic Ketoacidosis And Its Treatment!

Diabetes is a very common condition these days and it is gaining more and more roots in our society. The condition starts from dying Beta cells of the pancreas or developing resistance against insulin. The resistance against insulin generally develops in almost all the cells of the body. Thus production of more and more insulin and in the first scenario the dying beta cells results in the lack of insulin in the body thus developing high levels of glucose in both situations. In this article, we will discuss about the diabetic ketoacidosis which is best understood as a condition which is a complication of diabetes type 2 and includes breakdown of body fat at a very fast rate. So let’s start with a detailed discussion about diabetic ketoacidosis.

This is a life threatening situation which develops in patients with diabetes type 2. The situation occurs only when the body starts to break down fat at a rate that is too fast. The liver processes the fat into ketones and this results in the blood becoming more acidic. Ketones are normally produced by the liver when the body breaks down fat after it’s been a long time since your last meal. The ketones are then used by my muscles and heart. When ketones production is too quick and built up in the blood it can be intoxicating as it makes blood more acidic. This condition is called ketoacidosis.

Examination and Tests Of Diabetic Ketoacidosis

Treatment for Diabetic Ketoacidosis (as described in modern science)

In ayurveda the diabetes is explained as prameha and prameha is further divided into three types that is kaphaja prameha, pitta prameha and vata prameha. These three types have further subtypes which are explained in detail in the classics.

The types of vata prameha, hasti prameha and madhumeha are explained in which the oja of a person starts to leave the body with urine he or she urinates. So indirectly this can be related with the diabetic ketoacidosis explanation in ayurveda.

Ketone bodies are basically the burned fat of the body, whose utilization is done at a faster rate in this scenario and in general fat is the energy deposit in the human body. When a source of energy is utilized 10 times faster (this fat can be considered as the source of oja) then it is understood that the body is working more than its usual capacity just to match the increased glucose levels in the body. DIABETES. If the process is not interrupted then it can be fatal.

Generally the Ayurveda Texts explain that intake of bitter food articles like bitter gourd, jambul fruit, gooseberries can help in controlling the sugar levels in blood. To be added, having water from copper vessels is also effective in this case. The formulations like lodhrasava, madhaasav and devdarvarishta are really helpful. 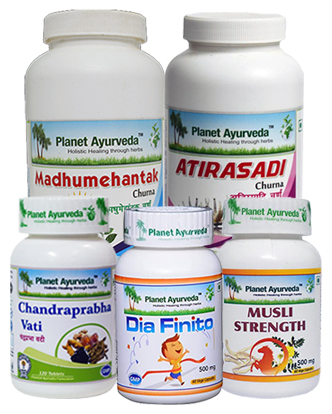 The madhumehantak Churna is a really effective formulation for controlling blood glucose levels. The formulation is combination of various herbs like Saptrangi (Salacia chinensis), Vijaysar (Pterocarpus marsupium), Bilva Patra (Aegle marmelos), Gurmaar (Gymnema sylvestre), Neem Patra (Azadirachta indica), Methi (Trigonella foenum graceum) and many others. The formulation has rejuvenation properties as well and helps in landing in further complications of diabetes. It helps in controlling three typical symptoms of diabetes and hence helps in lowering the insulin resistance of the body and also helps in rejuvenation of beta cells in the pancreas.

The formulation is a rejuvenating herbal formulation that is used to build stamina as well as strength in both genders. The ingredients of this formulation are really effective and the formulation includes ashwagandha (Withania somnifera), gokshura (Tribulus terrestris), semal musli (salmalia malabarica), shatavari (Asparagus racemosus) and many more. Atirasadi churna has its effect on shukra dhatu and also helps in nourishing the body by simultaneously nourishing all the dhatus before the shukra dhatu. The atirasadi churna has a very great effect on accelerated fat breakdown in the body and helps in lowering its rate and also helps nourish the tissues. Thus reducing the formation of ketone bodies.

Dosage: Half tsp twice a day after meals with lukewarm water.

This is also a choice of formulation in classics that helps in protecting the mucosal layers from the effect of ketone bodies in this case. This vati is formulated using guggul resin (Commiphora mukul), amalaki (Emblica officinalis), Haridra (Curcuma longa), Shilajit (Asphaltum), Karpoor (Cinnamomum camphora), Vacha (Acorus calamus), Mustak (Cyperus rotundus), Amalaki (Emblica officinalis), Vidanga (Embelia ribes), Guduchi (Tinospora cordifolia) and few other efficient herbs. It detoxifies the body and has efficiency to protect the urethral mucosa from the effect of ketone bodies as they pass with urine. No doubt the formulation is having a very great effect in lowering the sugar levels as well.

Dia Finito Capsules has herbs like Saptrangi (Salacia Reticulata), Mamejava (Enicostemma littorale), Sonth (Zingiber officinale), Kali Marich (Piper nigrum) and pippali (Piper longum). Dia finito is a very effective formulation which is effectively used for controlling the increased sugar levels. It helps in reducing the resistance against insulin and also has a rejuvenating effect on pancreatic beta cells. The all over symptoms of DKA, if mild are very well controlled by dia finito in varying doses. The best thing is that it helps in pacification of kapha dosha.

The formulation has two ingredients: Musli (Chlorophytum borivilianum) and gokshura (Tribulus terrestris). This formulation is prepared using standardized extract of the above-mentioned two ingredients. The formulation is capable of providing regeneration effects to the body. Moreover, it also provides strength to the all over bodily muscles and tissues. In DKA the formulation gives really great results by strengthening the body tissues and regenerating the dying cells due to production of ketone bodies.

Dosage: One capsule twice a daily with plain lukewarm water after meals.

This condition can develop in many individuals who are having high levels of sugar or uncontrolled levels of sugar. The patient can die if exact treatment is not given on time. Ayurvedic medications offered by planet ayurveda in this case helps in reducing the excessive sugar levels and thus relieves the symptoms. The three p’s that are polydipsia, polyphagia and polyuria can be controlled or relieved with these medications. The ayurvedic formulations explained above are really helpful in this condition and are 100% herbal. There is no addition of preservatives, dyes, adulterants etc. With Ayurvedic medication a person has to be very patient as the process of its working is slow but quite effect full. The Ayurvedic supplements are prepared after testing the ingredients and every batch as consistency of quality matters. In case of any query kindly visit www.planetayurveda.com.