Pilonidal sinus is a painful and discomforting condition in which a sinus tract develops in the natal cleft (between the buttocks). Since it commonly contains tufts of hairs, it is known as pilonidal sinus. “Pilonidal” is described as the ’nest of hair’. Initially, a cyst develops in that area at the back of sacrum and coccyx. This can be seen as a lump or bulge due to the collection of fluid in it. Most people are reluctant to show doctors due to its location but a proper treatment is required to avoid complications as the problem can grow severe over time and disrupt the routine life. Here, we will let you know about the way of treatment in which you do not need to hesitate to show it to the doctors, just share your concerns and get rid in the easiest and most convenient manner. 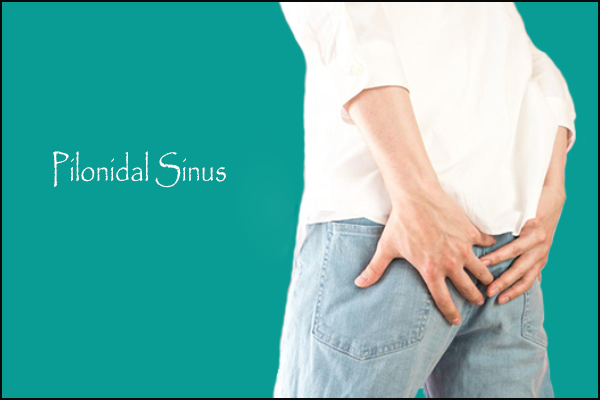 Signs and symptoms of Pilonidal Sinus

Patients may have a series of signs and symptoms depending on the stage of the disease, also sometimes, it may remain asymptomatic as a dimple.

The origin of pilonidal sinus is not fully understood but some people may have enlarged hair follicles at the base of the spine. Due to some certain reasons like friction, injury etc, the in-growth of hair occurs and the body considers it as a foreign material thereby initiating a reaction over there.

The Risk factors of Pilonidal Sinus are:

It is generally diagnosed on the basis of clinical presentation. In very critical cases, Magnetic resonance imaging (MRI) is used to differentiate between a pilonidal sinus and a fistula.

Since their roots can reach up to the tailbone, surgery is mostly recommended. It can be either open surgery or flap surgery. But, what troubles is the long-term side effects of these surgeries for life. So, why can’t we try the alternative treatment which not only treats the problems, but also aids in the prevention of various other ailments without any adverse effects at any time. It is the Ayurvedic treatment.

In Ayurveda, Susrutha Samhitha mentions it under the context of ‘Nadi vrana’(sinus ulcers). Pilonidal sinus can be related to ‘Salyaja nadi vrana’. When a person neglects the initial swelling or pus filled wound in the natal cleft, and continuous unhealthy food and activities makes the pus move inside and comes out through an opening. Mild cases of pilonidal sinus can be treated through oral and topical Ayurveda medicines while in severe cases Para surgical procedure called ‘ksharasutra’ (tying with medicated thread) is performed. It is the procedure in which a medicated thread is tied in the tract after probing and kept in situ. Local anesthesia is given, if necessary. The duration of the treatment depends on the length, number, branching and depth of the tract. The Ayurvedic treatment enables fast recovery of the patient with almost no chances of recurrence.

Keeping the above described Ayurvedic aspect and other principles of treatment, Planet Ayurveda serves some of the best and most effective herbal formulations for Pilonidal Sinus. These contain the pure organic herbs and are beneficial in the treatment of the disease as well as the prevention of the complications. The products are enlisted and described below. 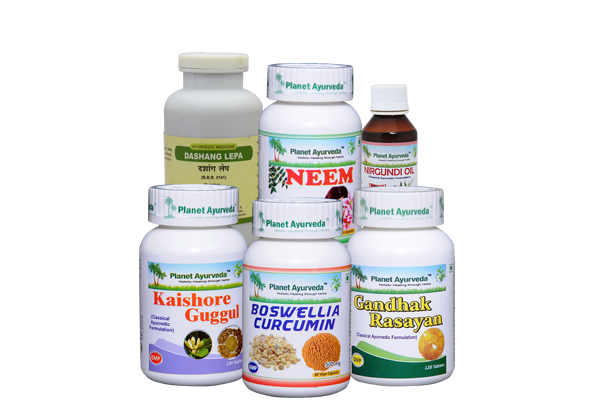 These are one from the range of single herb supplements from Planet Ayurveda. The product contains vegetarian capsules filled with the extracts from the leaves of Neem tree (Azadirachta indica). Neem capsules have the power to dry up and clean the moisture in wounds and ulcers. Also, it possesses antimicrobial properties and is useful in numerous skin diseases. It has got the potency to combat pilonidal sinus.

It is an Ayurvedic lepa preparation from Planet Ayurveda which is used for external application mainly in treating non-healing wounds, skin diseases, fever and inflammation. Dashanga means 10 parts and it is made from 10 ingredients like yashtimadhu (Glycyrrhiza glabra), Sirisha (Albizia lebbeck), Chandana (Santalum album) ela (Elettaria cardamom), jatamansi (Nardostachys jatamansi), haridra (Curcuma longa), daruharidra (Berberis aristata) kushta (Saussurea lappa), tagara (Valeriana wallichii) and Sugandha Bala (Pavonia odorata). It is very effective in the pain management of pilonidal sinus. It is to be used with Nirgundi Oil as explasined below.

This oil is obtained from the resin containing leaves of the shrub Vitex negundo. Since the Nirgundi oil from Planet Ayurveda is processed with several other herbs like Manjishtha, Haridra and Kalihari, it enhances the action and makes it more efficient to be used in pilonidal sinus. It has antibiotic, antitoxic and anti-inflammatory action. It shows effective results in relieving pain and reducing anxiety. The oil cleanses the wounds and also acts as a muscle relaxant. It is prepared along with sesame oil.

Usage– Dashanga lepa + Nirgundi oil- mix both in equal quantities and apply on the affected area at night.

It is an effective combination of Boswellia and Curcumin, prepared in the house of Planet Ayurveda. Curcumin is extracted from curcuma longa and Boswellia extracts are usually made from the resin or gum of different varieties of Boswellia serrata trees which contain boswellic acid that can fight against inflammation. Long lasting and permanent anti-inflammatory effects can be obtained by taking this combination. It helps in relieving the pain and swelling in pilonidal sinus.

Gandhak Rasayan from Planet Ayurveda is a mineral based Ayurvedic medicine which contains correctly detoxified Gandhak (Purified sulphur) in it. It is also processed with several herbal decoctions and juices. Since, it is kanduhara (reduces itching) and relieves raktadosha (blood vitiation disorders like abscess), it is good to be used in the treatment of pilonidal sinus. Moreover, it improves immunity and body strength.

Hence, we should say that before going for a surgical treatment which takes away your natural way of life and even the natural body parts, try going for the Ayurvedic treatment at the initial stage only. At severe stages, it will take a longer time, but in the primary stage of the symptoms, these herbal remedies can do wonders if taken well as prescribed by the Ayurveda physicians. For more details, you can stay in touch with us through www.planetayurveda.com.