Extracts, pulps, decoctions, infusions and hot Infusions are the fundamental and basic herbal preparations of Ayurveda. These are used and well accepted in the name Pancha Vidha Kashaya Kalpana, or its literal translation is, that which helps the body from being destroyed. The decoction or Kwath is most used clinically and as the base of other preparations among them. A range of smaller preparations are mentioned in the classics other than these. They are categorized considering the similarities in their method of preparation with the basic preparations.

What is a Kwath?

The term Kwath is derived from the root word “Kwathana”, which means the process of boiling. It is a liquid preparation obtained by boiling one part of a selected herbal blend with 16 parts of water. The mixture is reduced to 1/8th part and then filtered. The filtrate is called Kwath or Decoction. Decoctions are essential in Ayurveda as it is considered one among the 5 necessities needed for an ideal systemic treatment. Kashaya, Srutha are all the synonyms of Kwath alone.

There are over 5000 Decoctions mentioned across the classical texts under various treatment modules in various contexts. One such auspicious and authentic formulation used since time immemorial is the Maha Manjistha Kwath.

The authentic reference for Maha Manjistha Kwath is mentioned in the epics of Sahasrayogam and in Bhaishajya Ratnavali. As mentioned above, the kwath is prepared by boiling and reducing a blend of coarse herbal powders under mild fire to produce the decoction, which include a total of 47 individual herbs, of which a few ones are explained below: 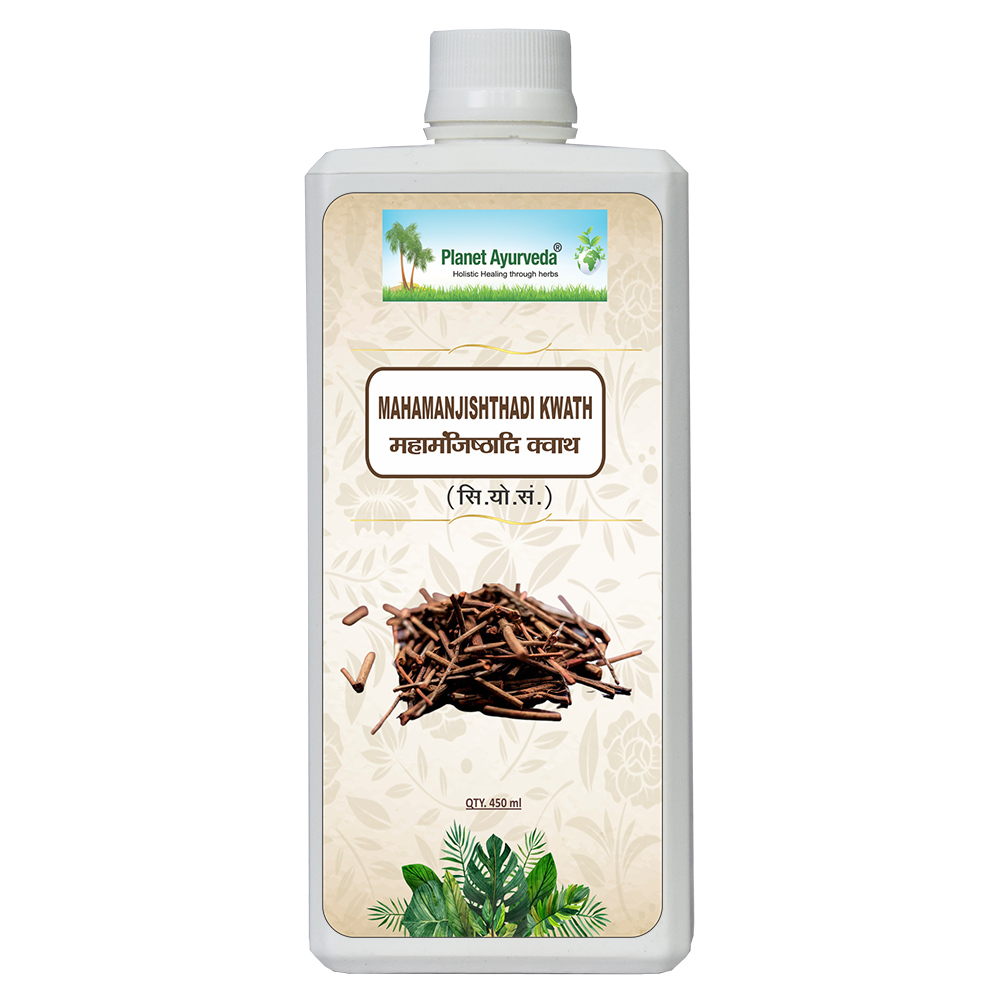 The main ingredients of maha manjistha kwath are as follows:

Traditionally the formulation is used for alleviating skin diseases. According to Ayurveda, skin disorders are the result of accumulation of impure blood in circulation. The potential drugs in this combination help to purify the blood by removing the associated dosha vitiation and thus curing the lesion. With the application of Vata pacifying herbs in this formulation, it has been used in conditions like facial palsy, paralysis, gouty arthritis etc. It has also been observed that this decoction helps in the management of obesity, hyperlipidaemia and common eye ailments as well.

Dosage: Authentically kwath dosage is 2 pala or approximately 48 ml, but with the standardization parameters it has been reduced to 10 -15ml with equal quantity of warm water, twice daily after food or as advised by your ayurvedic physician.

Speaking on a general note, ayurvedic medicines do not have any side effects if you have consumed the medication under the guidance of an ayurvedic physician.

Kindly keep all such medical formulations out of reach of children. And use only under medical guardianship. In case of any query kindly visit www.planetayurveda.com