Difference Between and Benefits of Kamdudha Ras Plain and Moti Yukt

The oldest science of life, ayurveda tackles the body and its issues through a different perspective. According to ayurveda it is important to adopt daily routines and seasonal regimen to manage the physiological fluctuations of the bodily biogenesis, despite the righteous acceptance of these regimes,if a disease still persists it is only after this that Ayurveda accounts for the management of medicines. The broad category of medicines may be divided for our convenience into immediate measures and rejuvenative measures. The greater strata of the medications used in Ayurveda belong to the rejuvenative caetory, for empowering the overall health of an individual whilst eliminating the disease is the motto of Ayurvedic disease management protocol.

Kamdudha ras is an important regenerative medicine mentioned in Rasa Tantra Sara more of a medieval book in the field of ayurveda, after the discovery of the mercurial combination as a rejuviative. Of the 4 types of regenerative medicines prepared in Rasashastra, Kamdudha Ras belongs to the one prepared by grinding all the ingredients to a fine paste, rolling out the desired amount and drying them in shade to obtain a pill or considerable quantity or dose, understood as the Khalviyantra Rasayana.

There are two varieties of this splendid combination, one with the addition of one executive drug, the Moti or sea pearl and the other without the same drug. Plain kamdudha ras is one classical preparation used to normalise the Pitta factor in all conditions of it’s surge. This multidrug combination includes both herbal and mineral drugs ground into a fine paste and then rolled into tablet form.

It is mainly administered for gastritis or Amla Pitta and bleeding gums including other Pitaja disorders. It is well effective in treating female disorders including leucorrhea and heavy menstrual cycles, painful menstruation, bleeding difficulty, cyst formation among others. Blood disorders and diabetics are also effectively treated using this Kamdudha ras. 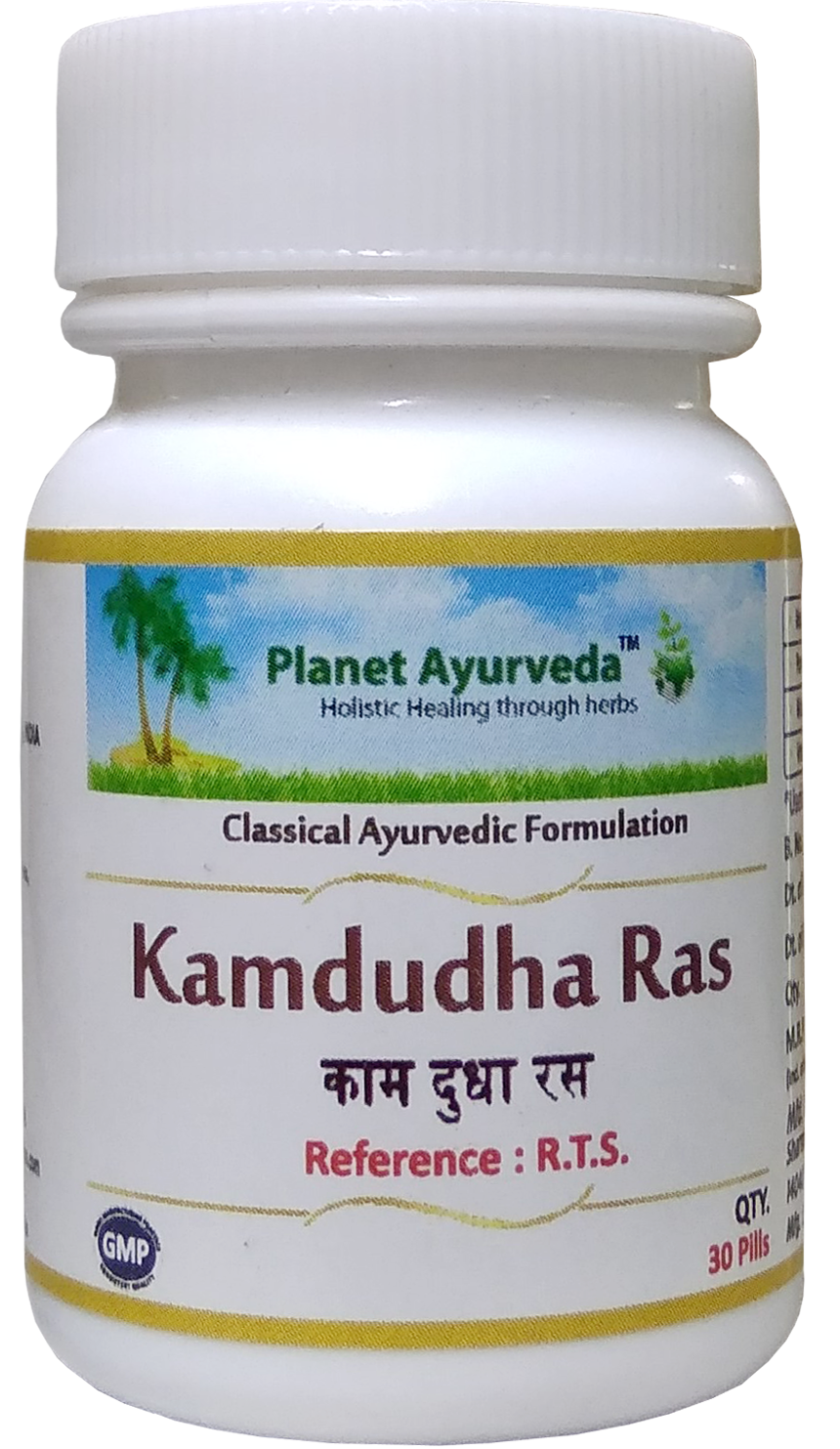 Ingredients of this Combination

The formulation of kamdudha ras without moti has the following ingredients with the undermentioned qualities.

The combination must only be administered under medical supervision, under the guidance of your ayurvedic physician. Yet a general dose of 1-2 tablets twice daily after meals is the accepted dosage. According to the condition, it is administered along with cow’s milk or ghee.

It is used in Pittaja conditions, gastritis, obstinate urinary disorders, odstiatire skin lesions, maladies of the female reproductive system and others.

Your Safety is Our Prime Concern

Pregnant women and children should not be given the medicine without medical supervision. Do not self medicate with this combination in any circumstances. Note to only consume the prescribed dose for the stipulated time only.

Addition of Moti pishti is the variation from the plain kamdudha Ras in the Moti variety of kamdudha ras with added advantages of Moti.

Mukta or Moti belongs to ratna varga the category of gems but most importantly is the best drug that normalises Pitta entity. This is the preferred combination of kamdudha ras for the wider range of benefits offered just by the addition of this mystic drug. 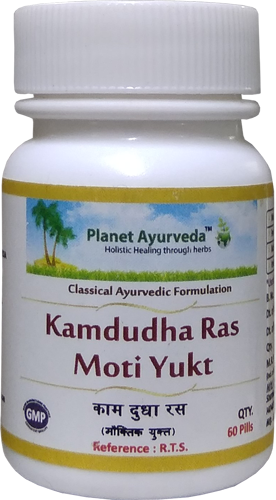 Chemically sea pearl contains calcium, carbon, and oxygen which has a better medical aspect in terms of it’s elemental structure.The sweet taste with the same metabolic end effect with extremely cooling property lowers all the escalated pitta entities. While it is predominant in its cooling abilities it is no lesser to enhance the digestive fire of an individual. According to ayurveda, if the digestive fire is normoised then the body itself is on the journey to betterment. Hence Moti is considered as the best remedy in all the classical texts. It is used in this formulation as Pisti or ground with Gulabi arka for 21 days which enhances all the inbuilt properties of sea pearl added with the cooling abilities of rose petal extract.

Ayurveda understands and supersends each disease through another eye. It is important to follow the dietary modifications and lifestyle changes mentioned in ayurvedic classics while undertaking internal medications to completely free yourself from any melody and reach the epitome of self rejuvenation. Ayurveda does not shor with goodness overnight, but it surely will lead to glorious nights in due course of time. In case of any query kindly visit www.PlanetAyurveda.com