Adequate amount of fluid & electrolyte balance plays a key role in maintaining homeostasis in the body, and it also plays a beneficial role in protecting the normal cellular functions, acid-base balance and tissue perfusion. Electrolytes are one of the major components of the body that helps in sustaining the body’s blood chemistry, muscle action and other processes in normal state. One of such electrically charged minerals is sodium. Sodium has a very beneficial role in maintaining blood pressure, supporting the functions of tissues, muscles & nerves. The main function of sodium is regulating the fluids in and around the cells to maintain the adequate osmotic balance i.e. fluid & electrolyte balance within & outside the cells of the whole body. But when the concentration of blood sodium is lower than the normal value then the condition that arises is hyponatremia. In this article we’re going to discuss hyponatremia in general including its clinical manifestation, causes and its treatment on the basis of Ayurvedic principles. 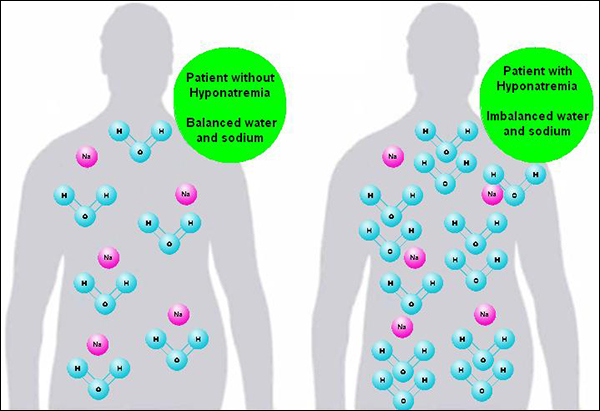 Hyponatremia is the condition of electrolyte imbalance in which sodium level drops down than the normal amount present in the blood. Under normal conditions, the human body is well designed to maintain the blood sodium level within the normal range of 135–145 mEq/l (milliequivalent/liter) despite a wide range of fluctuations in fluid intake by the person. The hyponatremic condition arises when the kidney’s functions are disturbed by some systemic disease or other cause and these altered functions result in impairment of the kidney’s functions to excrete free water and thus the plasma sodium level falls down below 130 mEqL.

Various lifestyles or associated systemic diseases are considered as the causative/risk factor for the hyponatremic condition:

Hyponatraemia is easily classified according to volume status:

Hyponatremia can be sometimes present as an asymptomatic condition. The common clinical features of symptomatic hyponatremia include:

The diagnosis of hyponatremia can be made on the basis of:

The concept of fluid & electrolyte imbalance (hyponatremia) in Ayurveda can be best explained with udakvaha sroto dushti. Acharya Sushruta had mentioned that taalu & klom are the basic seats of udaka vaha srotas.

Here in this case, udaka vaha stotras are the microchannels associated with the taalu (palate) and klom (adrenal glands & pancreas). As mentioned earlier, these glands are responsible for hormone secretions that determine the proper functioning of fluid and electrolyte balance in the body & also sodium balance in the plasma.

The disturbances in these microchannels due to the following causes mentioned by Acharya Charka:

Due to excessive intake of hot articles and warm lifestyle (as due to excessive heat inside or outside body will facilitate the passage of sweating and thus aiding in sodium excretion resulting in low serum sodium), ama dosha (endotoxins formed as a result of weak digestive power), fear, excessive water or alcohol intake (already mentioned) and suppressing the urge of thirst for a longer duration will lead to the vitiation of udaka vaha srotas dushti.

Planet Ayurveda is a manufacturing hub that produces herbal formulations. These products are processed & made under the strict guidance of our expert team of ayurvedic physicians. The formulations are 100% natural and are manufactured in adherence with the ayurvedic texts and are made with ancient time-tested formulas. 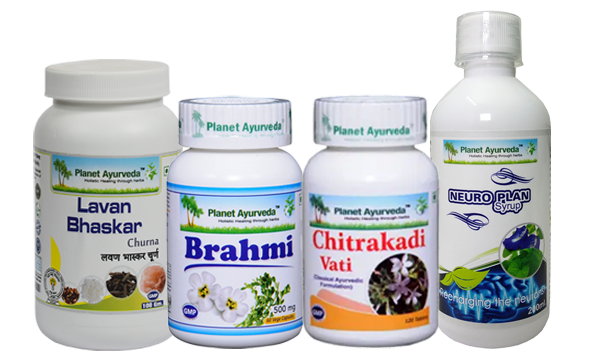 Chitrakadi vati is an amazing classical combination of herbs available in tablet form. The composition of this vati includes combinations of herbs having multiple actions that are beneficial in hyponatremia. These ingredients are ushna dravya (herbs having hot potency) like shunti (Zingiber officinalis) maricha (black pepper), pippali (Piper longum), chavya (Piper retrofractum), pippali mool (root of Piper longum) and chitraka (Plumbago zeylanica) along with Hing (ferula assa-foetida) due to their deepan action facilitate in better digestion of ama (endotoxins) and also aids in blood purification which in turn prevent the extracellular accumulation of fluids and thus help in reducing the swelling. The other ingredients include five types of lavan (salts) i.e. sauvarchala (sochal salt), saindhava (rock salt), vida (vida salt), samudra (common salt) and audbhida salt which are rich sources of sodium and will help in maintaining the electrolyte balance, two kshar i.e. yava kshara-alkaline extract of Barley (Hordeum vulgare) and swarjika kshara (alkaline extract) will help in lekhan karma i.e. due to their scraping action these extracts supports the fast excretion of the extra fluid accumulated in hyponatremic cases.

This is also a classical formulation in powder form having the mixture of four types salts as the main ingredients along with other herbs such as twak (Cinnamomum zeylanica), badi elachi (Amomum subulatum), amlavetasa (Garcinia pedunculata) and talis patra (Abies webbiana) etc. These herbs along with the salt helps is the very efficient source of essential micronutrients that helps in enhancing the electrolyte content in blood. Also the powdered form will also allow the formulation to reach upto the cellular level & normalize the altered metabolism of the cells due to swelling up of cells in hyponatremia. This formulation also promotes digestion & acts as an appetizer, thus proving a great role in managing the associated symptoms like nausea, vomiting in hyponatremia.

Dosage: 1 teaspoonful two times in a day with plain water after meals.

Brahmi capsules are single herb formulations made from the standardized extract of Bacopa monnieri available in capsule form. These formulations are made from the extracts of the best nervine tonics that are mentioned in ancient Ayurvedic texts. These herbal medicines will help in maintaining the proper balance in hormones, particularly antidiuretic hormone that is secreted from the pituitary gland located in the hypothalamus of the brain.

It is the polyherbal formulation formed by seven medhya dravyas (nervine boosters) including Sankhpushpi (Convolvulus pluricaulis), Madhuyashti (Glycyrrhiza glabra), Mandukaparni (Centella asiatica) and other such drugs along with trikatu (combination of three hot potency drugs) and honey. Also, these drugs support in preventing or treating the after effects of the hyponatremic condition such as drowsiness, restlessness, irritability etc.

The consequences of hyponatremia can range from being a normal lifestyle disorder which may be asymptomatic to the dangerous life-threatening conditions such as seizures, coma etc. So, it’s necessary to include these herbal formulations for treating hyponatremia conditions along with dietary & lifestyle changes as advised.