Labyrinthitis is an inflammatory condition which involves the membranous labyrinth of the inner ear. The patient with this condition presents with typical signs like hearing impairment or loss of hearing, vertigo, nausea, vomiting and tinnitus. The condition is generally caused by bacterial and viral infections. In some cases the condition can be the result of autoimmune condition or due to human immunodeficiency virus. Besides everything most of the patients recover fully yet in some cases a bit of hearing impairment along with residual balance may persist. In this article we will discuss labyrinthitis in detail which will include its causes, typical symptoms and its management for both modern and Ayurvedic viewpoints. But before that lets us start with a simple introduction to the anatomy of the labyrinths.

The inner ear consists of two structures, one is a bony labyrinth and another is a membranous labyrinth. The bony labyrinth can be understood as the collection of bony cavities which is situated within the temporal bone of the skull. It has three main parts: the vestibule, cochlea and semicircular canals. The membranous labyrinth is situated within the bony labyrinth and consists of four structures: the saccule, cuticle, semicircular ducts and cochlear duct. These all are filled with endolymph. SYPHILIS. These structures connect the inner ear to the middle ear and to the central nervous system. The labyrinth performs two sensory functions that are balance and hearing.

As we know about labyrinths, it’s functions and anatomy. It’s time to discuss the etiological factors of labyrinthitis.

Infections can include both bacterial and viral infections. Bacterial agents include the group of bacterias causing meningitis, viral labyrinthitis can be the result of measles, mumps, hepatitis and also due to herpes and chickenpox.

Trauma to skull bone or temporal bone or any kind of surgical trauma can cause labyrinthitis.

The toxic substances are like streptomycin, quinine, diuretics, tobacco and alcohol.

The clinical features or symptoms of labyrinthitis includes the following:

The modern doctors when once ruled out about labyrinthitis, they generally prescribe you with medication that helps in lowering the inflammation, prescribing antiviral medicines and steroids like cortisone. The symptoms like nausea and vertigo are managed accordingly. For balance regain special exercises can be performed.

The labyrinthitis is kept under the category of karana roga in Ayurveda. Explaining about karan roga acharya sushruta has explained some common treatment principles of ear diseases. These include:

Planet Ayurveda is an Ayurvedic firm that deals with the manufacturing of herbal formulations. The herbal formulations are prepared or manufactured using potent herbs that are really effective in managing more than one condition associated with the ears. The herbal preparations by Planet Ayurveda do not have any type of adulterants, fillers, dyes, additives etc. The medications are potent in supporting the recovery of ear disorders like labyrinthitis and hence give fruitful and positive noticeable results. The formulations which are offered by Planet Ayurveda for the management of Labyrinthitis are as follows: 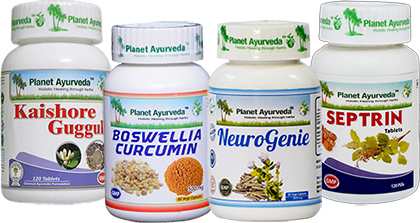 Septrin tablet is a very effective formulation which has many ingredients like Guggul (Commiphora mukul), Haldi (Curcuma longa), Tulsi (Ocimum sanctum) Sonth (Zingiber officinale) Marich (Piper nigrum) Pippali (Piper longum). Due to the presence of these ingredients the formulation is capable of subsiding the inflammation in the membranous labyrinth. This also enhances digestion due to the presence of smith. Moreover, the ingredients help in pacification of kapha and vata dosha as well. These dosha are related to the inflammation of labyrinths. It melts the accumulated kapha dosha and thus removes the blockage of micro channels.

Boswellia Curcumin is filled with anti-inflammatory properties as it contains two very effective herbs which are Shallaki (Boswellia serrata) and Curcumin (Curcuma longa). These two herbs work best as an agent to reduce the inflammation and also have their effect on pain. They also play an important role in improving circulation. As the inflammation subsides the symptoms like vertigo and loss of hearing subsides simultaneously. It enhances the immunity and increases the body capacity to fight infections. It also protects the cells against free radical damage and works as an effective source of antioxidants.

Dosage: One capsule twice daily after meals with lukewarm water.

Kaishore guggul is a classical formulation which has many ingredients like amalaki (Emblica officinalis), Ginger (Zingiber officinale), haritaki (Terminalia chebula), amalaki (Emblica officinalis), Guduchi (Tinospora cordifolia), black pepper (Piper nigrum) and few others. The classical preparation is being used to remove accumulated toxins from the body and it also supports healthy blood circulation. Kaishore guggul shows a rejuvenating effect on the body and the body cells. The formulation is very popular for its fantastic effects. The formulation is very good as an anti-inflammatory agent and has brilliant results in reducing suppurative inflammation as well.

This formulation has two ingredients Brahmi (Bacopa monnieri) and Ashwagandha (Withania somnifera). These two ingredients make it potent enough to work as a preparation which can help in reducing the vertigo in Labyrinthitis. The standardized extract of these both herbs is used and the formulation gives ealy fantastic results. It also supports the neurological system and prevents labyrinth infection to travel to the brain or vice versa. This capsule supports regeneration of brain cells and also enhances the working of the neurological system.

Dosage: One capsule twice daily after meals with lukewarm water.

This condition can develop in many individuals and generally its occurrence progresses with age. Moreover, the patient can remain undiagnosed if correct attention is not paid. An Ayurvedic medication offered by planet ayurveda in this case helps in reducing the inflammation and thus relieves the symptoms. The vertigo can also be treated with some typical meditation or pranayama techniques. The ayurvedic formulations explained above are really helpful in this condition and are 100% herbal. There is no addition of preservatives, dyes, adulterants etc. With Ayurvedic medication a person has to be very patient as the process of its working is slow but quite effective. The Ayurvedic supplements are prepared after testing the ingredients and every batch as consistency of quality matters. In case of any query kindly visit www.planetayurveda.com