The well being of a human being is not just a random phenomenon. The genetic composition plays a pivotal role in this scenario. The characteristics and health of an individual is highly influenced by the genes passed on by his / her parents. A healthy set of genes will help the individual in staying on the healthier side. But there are various gene defects that result in the presentation of different types of abnormalities in the body. One such abnormality arised due to the irregularity in the genetic composition is the adrenoleukodystrophy. This condition will be discussed in detail along with its causes, symptoms, diagnosis, ayurvedic aspect, etc. in the following article. 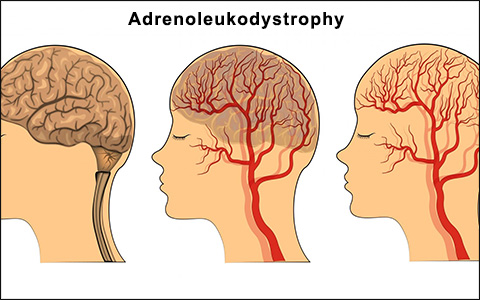 Among numerous hereditary conditions, Adrenoleukodystrophy is one variety. It is a type of genetic disease that results in the destruction of the myelin sheath.The myelin sheath is a membrane that surrounds the nerve cells in the brain and spinal cord. This myelin sheath serves various essential functions, one such action is the insulation. It is responsible for the insulation round the nerve cells which supports the normal transmission of nerve signals between the brain cells. When the myelin sheath is damaged, the nerve signals are not properly communicated throughout the body and thus resulting in hindrance in the functions of the body or even paralysis. The cause underlying the condition of adrenoleukodystrophy will be described as follows.

In Adrenoleukodystrophy, the body is unable to break down very long chain fatty acids. This can result in accumulation of saturated very long chain fatty acids in the various regions such as the nervous system, adrenal glands, etc. As it is mentioned earlier, Adrenoleukodystrophy being a genetic disease, it is linked to the X-chromosome. There are various forms of this disease such as –

For the diagnosis of adrenoleukodystrophy, a detailed history of the patient’s medical condition will be required. If the history is suggestive of adrenoleukodystrophy, then further investigations will be advised. This will include blood tests to evaluate the levels of very long chain fatty acids, if the report suggests high levels then genetic testing is advised. After the confirmed diagnosis, various medical and physical therapies are used to manage the condition appropriately. In the early stages or when the condition is diagnosed during the childhood years, stem cell transplant may also be a suitable option. The ayurvedic perspective will be discussed as follows.

The condition of adrenoleukodystrophy, when visualized through the ayurvedic principles, can be correlated to the beej dosha because of the hereditary pattern and further there will be dushti or vitiation of the vata dosha which will result in the presentation of the different neurological symptoms. The vata is responsible for the normal neurological functioning of the body. So, the line of treatment according to the ayurvedic literature will emphasize on balancing the vitiated levels of vata dosha in the body and improving the strength of the body. There are various ayurvedic formulations such as giloy capsules, ashwagandha capsules, brahmi capsules, spirulina capsules, etc. which help to manage the condition of adrenoleukodystrophy, and will be described as follows.

Planet Ayurveda is preparing a variety of medicinal ayurvedic products. The Classical ayurvedic formulations beneficial for the health of the patient of adrenoleukodystrophy are giloy capsules, ashwagandha capsules, brahmi capsules, rasraj ras, spirulina capsules, etc. These contain natural extracts of effective ayurvedic herbs and are prepared strictly according to the preparation methods described in the classical samhitas. The detail of these products is explained as follows – 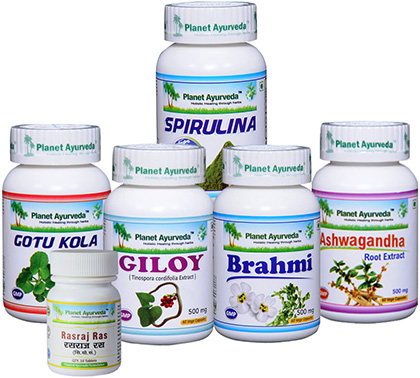 Brahmi capsules contain a natural extract of a very beneficial ayurvedic herb brahmi (Bacopa monnieri). It is known to be a very effective herb for a variety of neurological disorders. Brahmi is a very potent vata pacifier and thus is useful in improving the condition of adrenoleukodystrophy. It has various other benefits also such as improves memory, provides strength, etc.

The ashwagandha capsules are prepared by planet ayurveda using natural extracts of ashwagandha (Withania somnifera). Ashwagandha is hot in potency and has medhya properties i.e. improves the neurological state of the body. It helps to pacify the vata and pitta dosha also. This will help to regain the body’s health and improve the condition of adrenoleukodystrophy.

The gotu kola capsules prepared by planet ayurveda contain natural extracts of the very beneficial ayurvedic herb gotu kola (Centella asiatica). Gotu kola is also known as mandukaparni. It contains beneficial medicinal properties; it is cool in potency and light on digestion. Gotu kola has medhya properties i.e. it is very beneficial for improving the neurological health of the body. Hence, improves the health of the one suffering from adrenoleukodystrophy.

Rasraj ras is being prepared by using various ayurvedic components such as Parada (purified mercury), Abhraka (Purified Silica), Swarna (Calx of gold),Loha bhasma (Calx of iron), etc. It is a classical ayurvedic formulation which shows great results in improving various health conditions arised due to the vitiation of vata imbalance. Hence, it is effective in managing the condition of adrenoleukodystrophy.

Dosage: One to two tablets two times a day.

The giloy capsules are prepared by planet ayurveda using natural extracts of giloy (Tinospora cordifolia). Giloy is also known as guduchi. It is very effective in balancing the tridosha. Giloy is effective in eliminating vata disorders, improves the strength of the body and is also known to rejuvenate the body cells.

Spirulina capsules help to maintain good memory and are also useful in boosting the immune system of the body. It possesses various other health benefits also such as maintaining blood sugar, supporting healthy skin, etc.

After analysing this above described information, Planet Ayurveda can conclude that adrenoleukodystrophy is a severe condition, but it can be managed effectively through the use of ayurvedic formulations such as giloy capsules, ashwagandha capsules, brahmi capsules, spirulina capsules, etc. To keep the diseases at bay, one should always follow a healthy diet and lifestyle along with the ayurvedic medicines.

← Ayurvedic Treatment For Orchitis With Herbal Remedies
Efficacy of Dostarlimab in Treating Cancer And Its Effects And How Ayurveda Helps In It? →