Urticarial vasculitis is a condition that involves inflammation of small blood vessels that supplies the skin. This condition shows early clinical manifestation including red erythematous wheals or patches that may persist for more than 24 hours that resembles the patches in Urticarial lesions. In Ayurveda, due to many common features this condition can be best correlated with Vata Pittaj Visarpa (Agni Visarpa) described by Acharya Charka in Chikitsa sthan 21st chapter i.e. Visarpa Rog. Let’s discuss the modern & Ayurvedic aspect of the disease & the best possible treatment method according to Ayurveda.

Urticarial vasculitis (UV) is a rare form of auto-immune disorder with key features like the vasculitis i.e. inflammation of small cutaneous blood vessels, which ultimately leads to the damage to vital structures or organs due to reduced blood flow.

THE TWO TYPES OF UV ARE

The less severe form of UV in which there is normal level of complement proteins is found and the manifestations in this type are generally seen locally, without affecting the other vital structures.

This condition of UV is more severe as it has systemic involvement i.e. it can affect various other organs other than skin such as joints, lungs, GI Tract, kidneys and eyes etc. This condition is mostly found to be associated with some systemic connective tissue disorder such as SLE (systemic lupus erythematosus). This diseased condition is having low levels of complement proteins.

The exact cause of Urticarial vasculitis is not known. Some possible risk factors that may lead to disease formations include:

Causes mentioned in Ayurveda for Visarpa roga include: (Charka Chikitsa 21/16-21)

This condition usually starts with clinical features like red spots or wheals on the skin. But as the condition progresses and remains untreated it may start to manifest the features systematically i.e. affecting the multiple organs.

This shloka by Acharya Charka mentioned in Charaka Chikitsa Sthana 21/36 describes the clinical features of Vata-pitta Visarpa (Agni Visarpa). Some key features of the shloka are

Diagnosis is mainly based on the patient’s history, clinical signs & symptoms. Skin biopsy is considered the gold standard of diagnosis. Other investigations include blood examinations and other investigations to rule out other systemic diseases.

Urticarial vasculitis if becomes chronic can create many troubles in treatment, and can lead to very major health ailments or even to death. Hence, this disease must be treated at early stages before the systemic involvement of the disease.

Acharyas had also mentioned sadhyaasdhyata (prognosis) of Visarpa roga as

The Visarpa roga which is bhairmarg gat (i.e. limited to skin only) is easily treatable, the diseased condition in which there is depletion of body tissues (antarmarg gat) are krich sadhya i.e. difficult to treat.

Also the specific mention about the prognosis of Agni Visarpa is also described that Agni Visarpa if present with uncomplicated state and the condition is not affecting the other vessels- tendons-muscles-body fluid & other body tissues, then it is treatable. And if Agni Visarpa is treated with negligence then it can kill the person like a poisonous snake. (Charka Chikitsa 21/42)

Treatment of Urticarial vasculitis depends on the severity of systems & by proper accessing the condition & its involvement with whole body. Modern medicine has antihistamines for reducing allergic reactions & NSAIDs (Non-steroidal Anti-inflammatory Drugs) for dealing with pain & inflammations and other symptomatic treatment.

Nidana Parivarjna: Avoidance of causative & risk factors of the disease as mentioned above in this article.

Shodhan Chikitsa include the treatment methods that consist of few procedures that are useful in detoxification of body & body tissues.

Shaman Chikitsa include various formulations given by Acharyas for oral administration or local applications:

Single drugs which are beneficial for this diseased condition

Planet Ayurveda is an herbal manufacturing company that makes medicinal formulation with strict adherence to ayurveda. The products which are made here are obtained from 100% natural sources and are well processed, purified and then formulated according to the ancient time tested formulas.

Herbal remedies suggested by experts of Planet Ayurveda for Urticarial Vasculitis are: 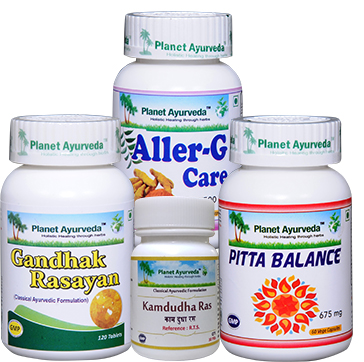 It is a poly herbal formulation consisting of 4 herbs available in capsule form. The four ingredients include Shrisha (Albizia lebbeck), which is the plant well known in Ayurveda for its vish-ghan properties i.e. removing poisons from the body. Thus by removing the excess toxins from the body Shirsha helps in faster wound healing & better recovery. The next ingredient is Neem (Azadirachta indica) which is a famous drug for various blood and skin related disorders. It has antiseptic & disinfectant properties which prevents the disease from progressing further & aids healing. The third ingredient is Haridra (Curcuma longa) which is also known as Curcumin. Haridra is the most useful drug in any of the allergic conditions, due to its antioxidants and anti- septic, anti-inflammatory & analgesic properties it is the drug of choice to be added in this formulation for rapid recovery. The fourth and last drug in this formulation is Ashwagandha (Withania somnifera), this drug is the best drug for enhancing immunity & providing strength to the body to fight from other infections as well. Thus, also checking the progression of the disease

Gandhak Rasayan is a potent classical mineral preparation that contains a solo ingredient i.e. purified Sulphur which is available in tablet form. Gandhak Rasayan is well known for its effects in various skin related disorders due to its sheet virya and pitta shamak properties. As we’ve discussed in this article, Agni visarpa is caused due to cumulative vitiation of vata and pitta dosha. So, Gandhak Rasayan is very much helpful in this condition as it reduces various pittaj symptoms like by calming the burning sensations of the blisters.

This product is the best preparation provided by our experts for reducing the effects of vitiated pitta. It contains five minerals or mineral compounds, along with stem extract of one herb that is Tinspora cordifolia which is a sheet virya drug having immune boosting properties. The other five ingredients having cool potency including kamdudha ras (an Ayurvedic mineral compound), praval pishti (coral calcium) etc. All these minerals along with Guduchi provide a perfect combination to combat with excess vitiation of pitta and thus treating the root cause. This formulation is available in capsule form.

When we talk of the best Ayurvedic compound for balancing pitta Kamdudha Ras is one of them. Kamdudha ras is a classical Ayurvedic formulation which contains Giloy satva (extract of Tinospora cordifolia) along with other mineral drugs that are having a great role in reducing pitta related manifestation and also treating the root cause of the disease side by side.

Here in this article as we can see modern medicine is focused on symptomatic treatment which no doubt provides relief in very small amounts of time but that too for shorter duration of time and the chances of recurrence are very much high & also having various side effects. While Ayurvedic drugs which are obtained from natural sources and are comparatively having less side-effects and more therapeutic effects. These Ayurvedic products along with detoxification procedures that are mentioned above and some life & dietary modification can treat the root cause of the disease with very much less chances of recurrence of disease. Hence, there is better scope of Ayurveda in treating Urticarial vasculitis.In case of any query kindly visit WWW.PlanetAyurveda.com