The host-adapted human pathogen Neisseria gonorrhoeae is a species of gram-negative bacterium that tends to occur in pairs. Genitals and blood, joints, heart, eyes, urine, faeces and boils are some of the common sites where this bacterium can be found. N. gonorrhoeae is the causative organism for many genital & other infections. Mainly it is considered as the pathogen responsible for Gonorrhea. Gonorrhea is a genitourinary infectious sexually transmitted disease caused by this bacteria. But despite Gonorrhea, this agent is the major factor for many other variants of gonococcal pathologies including gonococcal ophthalmia neonatorum, disseminated gonococcemia, and septic arthritis, endocarditis etc. Let’s discuss this bacteria, the various diseases caused by it & their manifestations and possible ways to prevent & treat the infection by Ayurveda.

Neisseria gonorrhoeae is an aerobic gram-negative diplococcus without a polysaccharide capsule. It is an aerobic & oxidase-positive bacterial species that survives within neutrophils. Symptoms of N. gonorrhoeae infections differ depending on the site of infection and mode of disease transmission but in many cases the infections are usually asymptomatic. 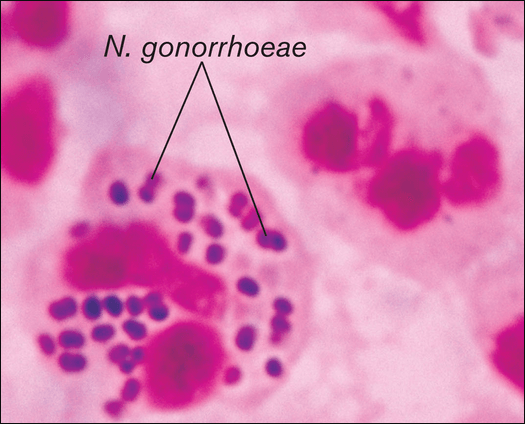 Neisseria gonorrhoeae is the sole causative factor of the various diseases listed above. Further knowing the mode of transmission is necessary to understand the pathogenesis of disease.

The possible ways by which the causative agent can transfer from the affected person to a healthy person, N. gonorrhoeae, are not able to survive outside the body of the host. In case of gonococcal infections the transmission methods are:

The pathogenesis of the Neisseria gonorrhoeae is explained in the following stages:

The primary stages of the disease are usually asymptomatic. Let’s have a system-wise review of the infections:

If untreated, infection may spread from the urethra to nearby structures, including the testicles causing orchitis/epididymitis or to the prostate resulting in prostatitis, also increasing the risk of prostate cancer.

In females, initially there is cervicitis.

If gonorrheal infection ascends via the cervix, endometrium, and fallopian tubes it may result in various Pelvic inflammatory diseases such as endometritis, salpingo-oophoritis which can lead to infertility and also enhance the risk of ectopic pregnancy.

Depending on the route of transmission, the bacteria may cause pharyngitis or proctitis (infection of the rectum).

Perinatal infection: When the disease is transmitted from the mother to child by birth, then the primary feature is ophthalmia neonatorum (neonatal conjunctivitis- an infection of the eye). This eye infection can lead to corneal scarring, which gradually leads to complete loss of sight.

Systemic gonococcal infections start to appear when the bacteria enters the bloodstream. In joints: causing syndromes such as dermatitis-arthritis and pyogenic arthritis. Fever, blood borne disorders, and immune deficiency are some other associated features. This condition is also believed to be the cofactor for HIV-1. In rare cases, the systemic infection may cause

The diagnosis can be made on the basis of patients’ history, clinical features & some lab investigations such as bacterial culture, gram stain and polymerase chain reaction or Nucleic acid amplification testing of

Acharya had mentioned a disease named Puyameha that showed close resemblance to Gonorrhea. Bhaisjya Ratnavali had described the cause & method of transmission of the disease in the following shloka:

In simple words, this shloka states that due to the unprotected sexual contact with many partners, sexual intercourse of the affected female with men or vice versa this disease is transmitted from the diseased to healthy one.

After the entry of causative organism (nidan sevan), there is a vitiation of tridosha with pitta predominance, which in turn affect the blood and thus through pitta & rakta dushti it cause the violation of urinary microchannels (mutra vaha srotas dushti) which results in infection of urinary tract and when left untreated & over aggravated pitta dosha will affect the blood which is the cause of systemic complications such as amavaat (arthritis) etc.

Modern medicines use the course of antibiotics such as penicillin derivatives, which are considered as the drug of choice, and other symptomatic treatments. But long term use of these will lead to many side-effects including adverse effects on kidney & liver. Ayurveda being a life science, provides a holistic approach of detoxification procedures and herbal medicines for treating the disease along with slight lifestyle modification for quenching the vitiated dosha. Treatment protocol according to Ayurveda:

Raktmokshan (Bloodletting procedures) must be done in early stages to draw impure blood out of the system.

Shishan prakshalan (Urethral wash) with Nimba Patra kwatha (decoction made from the leaves of Azadirachta indica) or Fitkari jal (alum mixed in water).

Planet Ayurveda is an ayurveda based unit that manufactures herbal medicines which are obtained from natural sources. Planet Ayurveda is fully devoted for the promotion of the various medicinal qualities of herbs and providing opportunity for the holistic approach to heal to the common man. These products are made in adherence to ayurvedic texts and our experienced & expert ayurvedic physicians. 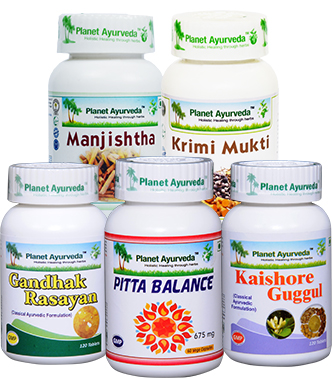 Gandhak Rasayan is a single mineral formulation available in tablet form. It is a potent medicine which is obtained from purified Sulphur. In this disease the dosha involved is pitta dosha and dushya is rakt. This drug is beneficial in both raktaj & pittaj disorders due to its sheet virya.

Dosage– 2 tablets twice daily with plain water, after a meal.

It is a single drug herbal formulation made from the extract of plant Manjistha (Rubia cordifolia) which is best known for its blood purification abilities (Rakt shodhak). These are rich in antioxidants which help in removing toxins & purifying the system.

Kaishore guggul is a classical poly herbal preparation. The guggul in this formulation is the purified resinous extract of the Commiphora mukul which is full of anti-inflammatory & analgesic properties. Other ingredients of the compound include Amrita (Tinospora cordifolia) which is full of antioxidants and promotes healing (vrana nashak), and trikatu (three herbs with hot potency etc. These ingredients will act as shoolhar (analgesic) and as a good appetizer, correcting mandagni which is the sole reason behind all the endotoxins in the body.

Dosage– 2 tablets twice daily with plain water. It is advised to chew it nicely or use the tablet in crushed form for better results.

Pitta balance is the best remedy for various pitta related disorders created by our experts. This disease is caused due to tridosha having pitta dosha predominance. This is the best solution as it contains all ingredients that are having cool potency and thus they all help in balancing the aggravated pitta dosha. Side by side it also acts as a blood purifier. Some of the ingredients of Pitta balance are coral calcium, agate calcium and kamdudha rasa and other minerals along with the stem extract of Tinospora cordifolia which also has cool potency.

These capsules contain krimihar dravya (antimicrobial drugs) such as Palaash (Butea frondosa) and Vidang (Embelia ribes) and Artemisia absinthium which do the killing of various harmful microbes also it contains drugs such as haritaki (Terminilia chebula) which promotes cleansing of the dead remains of the microbes & the toxins of the body and the final ingredient Haridra (Curcuma longa) is full of anti-septic & antioxidants that promotes healing of the infections.

Various sexually transmitted diseases are becoming common day by day. Decreasing immunity to the infection due to pollution & various dietary & lifestyle are the cause. So, using antibiotics for long terms in such infectious conditions may decrease your immunity which in turn causes resistance to the antibiotics as well as causing systemic diseases. So, it’s the right time to shift to the ancient method of treatment through herbs & minerals which will enhance the immunity & provide a better way to heal.In case of any query kindly visit www.PlanetAyurveda.com