Kidney function may be disturbed by diseases or as a side effects of various modern medicines used for extra renal disorders such as for hypertension or heart related disorders etc. The decline in kidney function can be of two types on the basis of severity i.e. acute or chronic. Acute kidney failure is caused by diseases like acute glomerulonephritis, bilateral pyelonephritis, severely high blood pressure and systemic lupus erythematosus while chronic renal failure may result from conditions such as nephrotic syndrome, tuberculosis of kidneys, and polycystic disease of kidneys, chronic pyelonephritis, and progressive glomerulonephritis.

According to Ayurveda, Vrik (kidneys) are the roots of medo vaha srotas (channel of fat tissue) and are made up of rakta (blood) and meda dhatu (fat tissues). So diseases arising out of these dhatus (tissues) can affect kidneys and cause their failure. Here, on basis of clinical presentation & signs this condition can be related with combination of medovah & mutraveh strotas dushti which leads to prameh particularly with kaphaj (Sandra meh or lalameh) & in some cases when the condition is presented with hematuria it is correlated with pittaja prameha such as manjisthameha and which further affects the mutra vaha srotas leading to the feature dysuria (mutrakricha).

Chronic kidney disease (CKD) is a progressive deterioration of function of kidney over a period of time and this condition results in collection of waste products, water and electrolytes in the body. The loss of kidney function happens gradually – it takes months / years to occur. It is so gradual that the symptoms don’t manifest until the function becomes less than 1/10th of the normal functions. Let’s discuss in brief the Ayurvedic aspect of the disease & its management according to Ayurvedic principles. 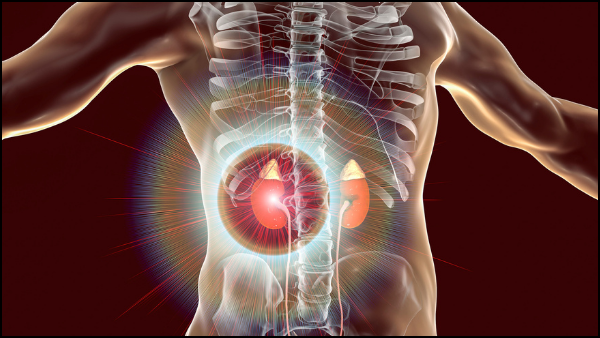 As already mentioned in the abstract, the Vrikk (kidneys) are considered as the basic seat of medo vaha srotas (fat tissue channel), therefore the when there is a dushti (disturbance in normal functioning) in medovaha strotas due to vitiation of one or multiple doshas it must lead to various kidney related disorders and if such dushti is continued for further some time it may lead to kidney failure. So, the etiological factors & symptoms of medovaha strotas dushti is given by Acharya Charka in Viman sthan as

This shloka states that due to lack of physical exercise, sleeping during day hours, excessive consumption of alcoholic beverages & over use of oily food items leads to the dusti of medovah stotras which leads to various medovah strotas dusti janya roga including kidney failure.

Above mentioned shloka states that due to habit of drinking water, eating & indulging in sexual activities while suppressing urination, any trauma to the channels or due to diminished metabolic functions may lead to the dushti of mutraveha strotas which leads to the symptoms like anuria (no urination), dysuria (painful micturition), passage of urine with abnormal density & color or pyuria (pus mixed urination).

Signs and symptoms of kidney failure mainly include

As any disease is caused by Nidana-dosha-dushya samoorchna, so by taking proper history of the patient the possible Nidana, dosh involved and dushya that are being involved can be identified and this will give a wide idea about the severity & prognosis of disease. Here in kidney failure, Nidana include heavy, inappropriate diet style & sedentary lifestyle & other kapha parkopak lifestyle & dietary habits.  Dosh include tridosha with predominance of kapha dosha. Dushya include Rakta (blood), Meda (Fat tissue).   Also, determining the person’s Agni & Bala is very important. It must be determined by asking about his/her Abhyaran Shakti (Eating capacity) & jaran Shakti (Digestive power) and the bala can be determined by asking the vyayam Shakti of the patient (physical exercise/activity).

In modern medicine this disease is treated by symptomatic treatment without treating the root cause by using corticosteroids, immunosuppressant drugs, diuretics & dialysis etc. which have their own list of side-effects. Lastly when all the procedures fail to respond they the only option left is kidney transplant which itself is a life threatening procedure & have multiple hazardous side-effects. Whereas in Ayurveda the treatment principle is focused on Vikar Vighatkar bhav or Samprapti Vighatan. With a holistic approach of dietary & lifestyle inventions & herbal medicines increases the chances of treating the disease ten folds. Treatment method for medovaha srotas is done by medorog chikitsa, aptarpan-karshan chikitsa (weight reduction therapy), & treatment methods used for  Management principles for renal failure in Ayurveda include-

1. Nidana Parivarjana include avoidance of all the etiological & risk factors responsible for the disease.

2. Shodhan chikitsa (detoxification procedures): This treatment methodology is being administered to the patient whose Bal, Agni & mansa are compatible for the procedure. Shodhan chikitsa in this disease include- Virechana (therapeutic purgation), vasti (medicated enema) particularly mustadi yapna vasti, and raktmokshan (bloodletting procedures).

3. Sanshaman Chikitsa: These include various herbal formulations which are mentioned by Acharyas. In this disorder medohar chikitsa (treatment for medo rogas), mutrakrichantak chikitsa (treatment for oliguria), combination of Ayurvedic diuretic drugs like varun, gokshura etc, raktavardhak (increasing GFR) & drugs important for kidney must be administered. The herbal remedies suggested by Ayurvedic experts are given below in this article.

Apathya Aahar: The patient with kidney issues must avoid:

5. Lifestyle modifications: Person must avoid the sedentary lifestyle and switch to a healthy way of living. That include the patient of kidney failure

Planet Ayurveda is a manufacturing hub. The products/ medicines manufactured here are purely herbal & are obtained from natural resources. The best herbal remedies as suggested by our experts for Kidney failure patients are: 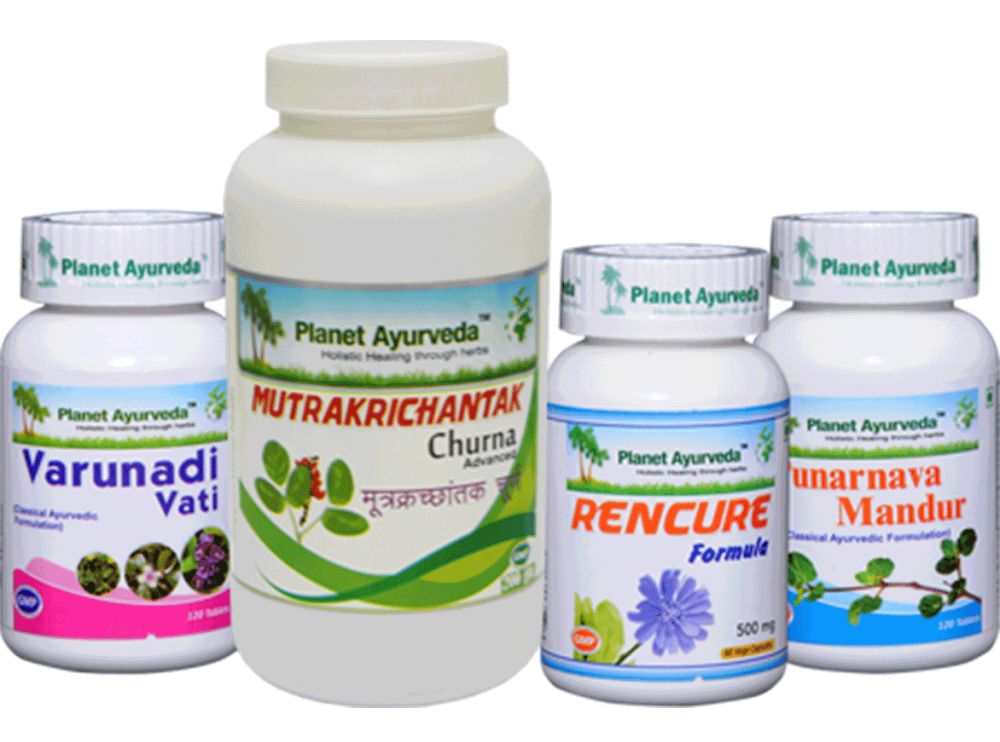 It is an herbal powder formulation which is very helpful in maintaining healthy kidneys. It is an herbal supplement which is especially suited for people to maintain a healthy urinary system.

Rencure formula is a multi-herbal preparation that is given with mutrakrichantak churna along with other health supplements for the betterment of renal health. The main ingredient in it include Gokshura (Tribulus terrestris) which is an Ayurvedic diuretic & very much effective in promoting the health of kidney & urinary tract.

It is prepared on classical Ayurvedic formulation. Varunadi vati has been used since a long time for the better functioning of a healthy urinary system and a healthy kidney function.

Punarnava mandur is a natural classical supplement which plays a great role in increasing Hb and thus helps in maintaining healthy blood composition and acts as a good supplement for keeping the kidney healthy.

As discussed already there are a few available treatment modalities in conventional systems of medicine, which are even still evolving but hemo-dialysis along with corticosteroids & immunosuppressive therapy and after that kidney transplant is the final step. In this regard Ayurveda provides leads through its integrated line of management by combining dietary & lifestyle modification and balancing effects of Ayurvedic drugs. So, the Ayurvedic way of managing the condition like Kidney Failure is very much more effective and safer than the Modern treatments. In case of any query related to Kidney Disease kindly visit www.PlanetAyurveda.com