Iron overload is commonly called as hemochromatosis. This is a condition in which the body stores too much iron and is often genetic. Excessive iron absorbed from your food is stored in your organs especially in your liver heart and pancreas. This pile up of iron is dangerous for the body and starts causing multiple organ degradation. In this article we will discuss the iron overload disorder and iron overload disorder pack offered by Planet Ayurveda for management of this condition.

The genes that are responsible for hemochromatosis are inherited. But only a minority of people have genes due to which they develop serious problems. Signs and symptoms usually appear in midlife and are rarely present during childhood or in juvenile stage. A gene called HFE is most often the cause of hereditary hemochromatosis. HFE gene is inherited from each of your parents. Basically iron plays a very important role in the body, including helping in formation of blood but too much iron is toxic. It deposits in various organs and from here the imbalance in the organs start and slowly depletion of organ function and finally failure takes place. Not everyone develops iron overload to an extent which is capable of damaging tissues.

Symptoms, signs and diseases as result of iron overload

Iron overload disorder pack is a combination made using potent formulations that helps increase the function of different organs. This pack includes formulations such as 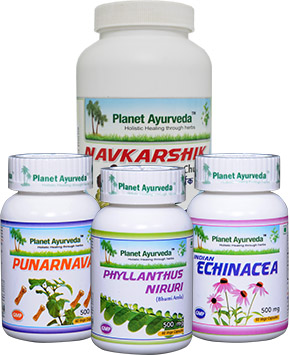 Punarnava (Boerhavia diffusa) is a perennial herb, straggling herb with a tall stem up to 60cm. Punarnava has many synonyms like punarnava, vishakh, kshudra patra and raktavrintak. It belongs to punarnava kula and kasahara, svedopag gana. Punarnava has many actions but most importantly it’s an diuretic that helps in blood purification by excreting the toxins along with excess fluid in the body. It is a cardiac tonic and accelerates heart rate. It is tridosha hara, pitt ghana by madhur, tikta and astringent taste, kapha and vata shamak by ushna veerya. It also reduces internal inflammation in organs.

Phyllanthus niruri or bhumiamla is a very potent herb that belongs to errand kula. The synonyms for this herb are vrushya, bhudhatri, vishwaparni, bindupatri and tamalaki. It is also a perennial plant like punarnav which grows around 18-24 cm in height and bears small leaflets. Bhumiamla has sheeta veerya and kapha pitta naashak properties. This herb is very much potent in protecting liver, enhances the functioning of liver and also helps in maintaining liver healthy tissues important for its working.

These three herbs combinedly show very positive results in and hence behave as rejuvenating. They also behave as antioxidants and remove free radicals from the body. Vacha is known as the sweet flag in english and works on almost every system. It is kapha and vata shamak by it’s katu and ushna properties. This also shows medaya prabhava which mena it acts on enhancing and protecting the nervous system also.

In addition if we discuss about neem then its medical properties are known in india from centuries. In general neem has been described with properties like anti pyretic, an anthelmintic and blood purifier. The bark of neem is cool, astringent and heals wounds either internal or external. Due to its blood purification properties it acts really good in excreting free radicals and toxins from blood. Same is the case with manjistha, manjistha is best known for its blood purification properties. Describing katuki, it has  many properties. Acharyas have said that ‘katuki’ has amazing hepatoprotective properties ranging from jaundice to cirrhosis’. It is known to stimulate the liver, reduce inflammation and fight viral afflictions.

In initial stages of liver damage, katuki helps in restoring impaired liver functions. The second last ingredient of this formulation is giloy which is known as a wonderful herb. This herb has references even in ramayana and in sanskrit is known by the name guduchi. It pacifies tridosha and behaves as an immunomodulator. The last ingredient of this composition is daruharidra and has wonderful properties like it enhances working of circulatory system, digestive system and respiratory system, which it overall improves the immunity of the body.

This formulation is manufactured using extract of kalmegh (Andrographis paniculata). This herb belongs to vasa kula and has laghu, ruksha and tikshna guna. Due to these three guna its kapha har and works wonderfully in balancing blood metabolism. It’s a well known liver stimulant and also immune enhancing properties. It also possesses anti-inflammatory and antipyretic properties.

Iron overload or hemochromatosis is a rare condition and as mentioned above it is related to gene alterations. In some cases patients may remain asymptomatic but in some patients worse symptoms can be seen. Patients with symptoms of hemochromatosis do not suffer from one organ malfunction but involvement of multiple system functions are noticed. In modern science it can not be managed once patients start landing in organ failure. Using ayurvedic medication iron overload can be managed and positive results are generally seen without any side effects. In case of any query kindly visit www.PlanetAyurveda.com

← GARLIC FOR BLOOD PRESSURE
How Diabetes can affect your Sexual Life →