Bone health protection is easier than anyone can think. It is easier if you understand the dietary, lifestyle and physical activity changes that keep your bone health strong. Bones are very important for our body to maintain structure of the entire body, to protect body organs, to anchor the muscles and for storing calcium in the body. This is the fact that if you maintain the bone strength at the childhood age of your children then your child will not be at the risk of developing bone injuries that are known as fractures. Bone fracture is not so common but if you neglect your bone health then you are at risk of bone fracture. There are many types of fractures among which we are going to discuss the Colles fracture in this article. Also with its detailed view we will discuss how we can make the management of Colles Fracture easier with Ayurveda. 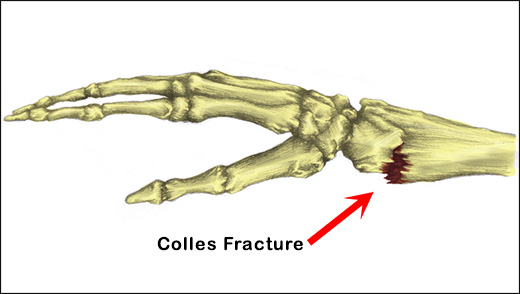 A Colles fracture is a wrist fracture which occurs when there is a breakage of your forearm’s radius bone. This type of fracture also known as distal radius fracture, dinner fork deformity or transverse wrist fracture. This fracture is named after a famous person Abraham Colles, the one who details this type of fracture. The radius bone is larger among the two bones of the forearm, which is broken down from its distal end which leads to the abnormal bending of wrist of affected site. This type of injury is very painful and the affected person is not able to grip or hold anything and the wrist becomes swollen and there is bruising in that area. So this is some brief view of colles fracture, now let’s see what the causes and types of Colles fracture in detail.

SOME FACTS ABOUT COLLES FRACTURE

Some facts that one must know about Colles Fracture:

The most common cause of this fracture is when somebody saves themself from falling down. And most commonly one is affected with the distal Colles fracture due to the following reasons:

Above we explained some causes of Colles fracture, now coming to the types part.

The type of fracture is decided on the basis of from where and how the bone breaks which further helps in deciding the line of treatment. Following are the types of Colles fracture:

The following symptoms may be experienced by a person who is having Colles fracture:

Above are the symptoms when there is only Colles fracture but if there is bone wrist fracture then one must experience the following symptoms:

Fractures as per ayurveda are correlated to Bhagna that includes two terms such as asthi bhagna (bony fracture) and sandhimukta (Dislocation). Colles fracture is a type of asthi bhagna. The symptoms of asthi bhagna are – excessive swelling, rotation, pulsation, hyperesthesia and no relief in any position. Ayurveda has various herbs that help in healing the bone fast. Following are some herbal remedies by Planet Ayurveda that include miraculous herbs which are effective in faster bone healing.

Planet Ayurveda is a clinic which works under the principles of Holistic science – Ayurveda. They formulates their own Herbal and Herbo-mineral products for preventive as well as promotive health purposes. The remedies are free from any kind of added preservatives as well as synthetic materials. The formulations are prepared under the strict observance of M.D Ayurveda practitioners so there is no side effect of these formulations. As we mentioned that Planet Ayurveda works for promotive as well preventive purposes so in case of Colles Fracture it helps in the management with its promotive purposes. Let’s take a look at the remedies that will assist in fast recovery of Colles Fracture – Fracture Healing Pack. 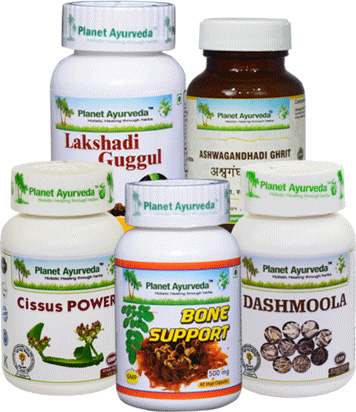 Lakshadi guggul is a Classical Ayurvedic formulation which is prepared by Planet Ayurveda in tablet form. It consists of various ingredients such as laksha (Laccifer lacca), Arjuna (Terminalia arjuna), ashwagandha (Withania somnifera) and various others. These herbal tablets are very effective in promoting bone health. The formulation is useful in healing the bone fracture that occurred due to any kind of injury. This remedy is also very beneficial in the management of any sprain or strain while reducing the pain too.

Cissus Power is a formulation prepared by Planet Ayurveda in capsule form. These are single herbal capsules which include the standardised extract of hadjod (Cissus quadrangularis). This herb is known since ancient times for its best sandhaneeya (bone healing) and bone strengthening effects. This is the reason why these capsules were added for the management of fractures in fracture healing packs.

Ashwagandhadi Ghrit is one of the classical ayurvedic formulations which is prepared as per the method mentioned in Classical texts. The formulation includes various ingredients such as ashwagandha (Withania somnifera), bibhitaki (Terminalia bellerica), Cow’s ghee and various other ingredients. This ghrit consists of Rasayana properties which provide nourishment and strength to the bones. Also the formulation is vata shamaka thus it helps in alleviating pain as well.

Bone support capsules by Planet Ayurveda are polyherbal capsules that consist of 6 ingredients enriched with bone strengthening properties such as high calcium compound, sandhaneeya (bone healing) and anti-inflammatory. Due to these properties bone support capsules are added in the herbo-mineral fracture healing pack. Further we are mentioning each ingredient and how it supports fracture healing.

Dashmoola capsules is a polyherbal formulation by Planet ayurveda which consists of standardised extracts of 10 herbs. The ingredients included in these capsules are bilwa (Aegle marmelos), shyonak (Oroxylum indicum), patla (Stereospermum suaveolens) and various others. These capsules include a vata and kapha pacifying effect that effectively reduce dryness at the place of healing and alleviates symptoms such as pain and swelling.

A Colles fracture is a wrist fracture which occurs when there is a breakage of your forearm’s radius bone. The fracture is named after the person who described it first , Abraham Colles. The major cause behind this fracture is when somebody saves themselves from falling down. As per Ayurveda it is correlated to asthi bhagna and the symptoms included are pain, swelling, bruising, awkward look and some others. For managing this condition Planet Ayurveda provides you with various herbal remedies that are collectively mentioned under Fracture Healing Pack. All these remedies are free from any kind of added preservatives and synthetic materials so no need to worry about the side effects of these remedies. So if somebody is recovering from the colles Fracture must add on this Fracture Healing Pack to recover your fracture at a fast rate.