Multiple system atrophy is a neurodegenerative disease. Degenerative diseases affect the body’s activities such as balance, movement, breathing and heart functions. This can be genetic so sometimes it can be due to medical conditions such as alcoholism, tumor, or stroke. The various degenerative disorders such as- Alzheimer’s disease, Parkinson’s disease, spinal muscular atrophy. It can be life-threatening conditions. Neural damage may cause cell death, this can be found in the brain at different levels ranging from molecular to systemic. This disease is caused by genetic mutations such as repeated CAG nucleotide triplet; this repetition of CAG causes polyglutamine. As we know neurodegenerative disease affects neurons in the human brain and is a major threat to human health. It is usually an incurable and debilitating condition where there is progessive death of nerve cells, persons suffer from ataxia, dementia and are unable to speak and breath. In this topic we are going to study its causes, symptoms and its ayurvedic management in detail. 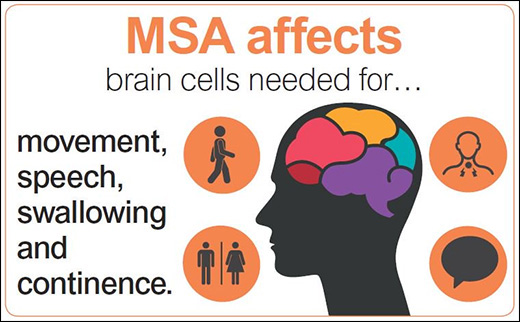 Multiple System Atrophy is a rare condition of the nervous system that causes gradual damage to the nerve cells in the brain, affecting body involuntary functions, blood pressure and motor control. It is known as Shy Drager Syndrome, Striatonigral degeneration. It is mainly characterized by autonomic dysfunction, rigidity, postural instability which is caused by progessive degeneration of neurons which includes several parts of the brain, basal ganglia, cerebellum. It affects about four in 100,000 people, in that this abnormal protein plays an important role in multiple system atrophy. A modified form of alpha synuclein protein affects the neurons and causes MSA. It is collectively known as parkinsonism, the abnormal protein in parkinson’s disease that plays an important role in multiple system atrophy.

Multiple system atrophy is autonomic failure which causes problems in the body where functions can’t be controlled.

Multiple system atrophy is a neurodegenerative disorder which is usually occurring due to imbalance in vata doshas, Vata dosha is the prime driving force behind all body activities. It is the tantra which runs the whole body, and disturbs the whole body. Vata doshas get aggravated and fill up in the empty channels of the body causing ekanga and sarvanga diseases. Excessive fat deposited all over the body produces margavrodha of vata, prakupita vata due to which margavrodha starts to circulate in the body which travels to joints and produces vatavyadhi.

Planet Ayurveda is an herbal pharmaceutical company that deals with the production of many herbal remedies used for treating numerous ailments. All the medicines prepared are of best quality and are free from preservatives, resins, any other synthetic material. These formulations prepared by planet ayurveda are made under strict guidance of M.D experts and under regulations of the ayurveda board. For this disease, ayurveda formulated herbal remedies which will provide relief without causing any side effects. 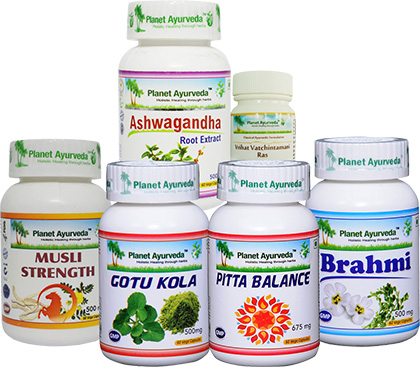 Brahmi capsules are single herbal capsules formulated by planet ayurveda using standardized extract of Brahmi (Bacopa monnieri). Brahmi capsules are used in the treatment of inflammatory conditions, digestive problems, and postnatal depression. These capsules act as a blood purifier, improves circulation and strengthens the capillaries. It is also helpful in impotence, irregular menstruation, and premature ejaculation. The benefits of these capsules as it increases the ability to solve the problems and prevent stress.

Ashwagandha capsules are single herbal capsules formulated by planet ayurveda using standardized extract of Ashwagandha (Withania somnifera). It is useful in debilitating conditions, stress, nervous breakdown, calms down the system and enhances physical strength and builds up stamina. It is useful in muscle fatigue and in arthritis of all types. Maintain the blood pressure and help in weakness caused due to diabetes. It is useful in gynecological disorders, nervous system disorders and provides great benefits.

They are polyherbal capsules formulated by planet ayurveda using ingredients such as Jahar Mohra Pishti (Natural Calcium Compound), Giloy Satva (Tinospora cordifolia), Akik Pishti (Natural Calcium Compound) and many more. It is a natural compound to restore the imbalanced pitta quickly, helps in leg cramps, improves bone marrow density, and fights irritability. It is rich in calcium so helpful in females during menopause.

They are poly herbal capsules formulated by plant ayurveda using ingredients such as Safed Musli (Chlorophytum borivilianum), Gokshura (Tribulus terrestris). It is helpful in strengthening the body and bone, uplifts the reproductive system. Musli strength increases the quality and quantity of sperm. These capsules are helpful in maintaining a healthy digestive system and liver in all ages.

Dosage: 1-2 capsules once or twice daily.

They are single herbal capsules, formulated by planet ayurveda using standardized extract of Gotu Kola (Centella asiatica). These capsules help to balance tridoshas, helpful in cardiovascular disease, and maintain the blood pressure. It maintains edematous swelling in the feet, hence improves the whole circulation in the body, manages the cardiac muscle tone and copes up weakness.

Multiple system atrophy is a neurodegenerative disease. Degenerative diseases affect the body’s activities such as balance, movement, breathing and heart functions. Multiple system atrophy is a neurodegenerative disorder which is usually occurring due to imbalance in vata doshas, Vata dosha is the prime driving force behind all body activities. For this disease, Planet Ayurveda provided herbal remedies which are effective in this disease without causing any side effects.

← Adrenoleukodystrophy – An Ayurvedic Overview And Treatment
Hand, Foot and Mouth Disease And Its Ayurvedic Treatment →