Crohn’s disease is a recurrent granulomatous inflammatory disorder which affects any part between the gastrointestinal tract from mouth to anus. But metastatic disease is the rare cutaneous disorder where noncaseating skin is present which is separated from gastrointestinal areas. Males and females are equally affected. It is the least common dermatologic manifestation of  disease. Metastatic disease along with its causes, symptoms and ayurvedic management will be described in this article. 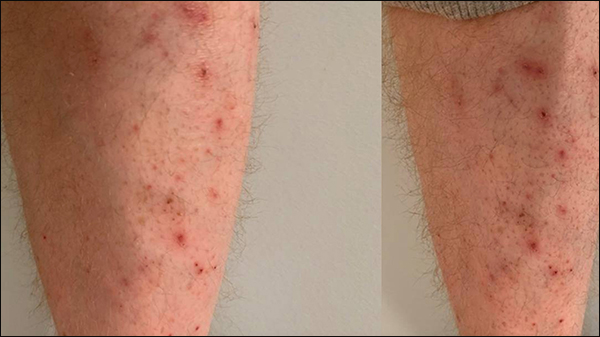 Crohn’s disease is an inflammatory bowel disease which is similar to ulcerative colitis. This disease is associated with arthritis, uveitis and various extraintestinal changes. Crohn’s disease can be seen among family members and vice versa. disease is a painful process. This metastatic disease occurs at a site which is separated from the gastro region. The incidence of this disease is previously seen in patients with  disease who have active gastrointestinal signs and symptoms. In this disease the plaques, nodules, and papules are present at the site of the ulcer. Can be seen in arms, legs, ear, breast and many other sites. This lesion is present solitary or in groups and is seen where skin folds are found. Can be painless and can palpate. Can be well seen in children and the most common site is external genitalia.

Is commonly found in papillary and deep reticular dermis which extend to the subcuticular fat region. Eosinophils may be present in finding metastatic disease. Pathogenesis- Although its etiology is unknown but it indicates that antigens in the gastrointestinal tract travel to circulatory system and get deposited in the skin and causes certain lesions which can be seen in microscope.Some reports found out that in some patients having crohn’s disease have impaired lymphocytes and low peripheral t lymphocytes count. And it is attributed to a type 4 hypersensitivity reaction because of t cell dysfunction the macrophages found are not activated and in competent to deal due to penetration of bacteria into bowel, this is leading to histologic changes in chrons similar to granulomatous disease.

This disease is caused due to high pitta in the body. Umbilical area is the main site of pitta which balances the digestive power in the body. Due to improper digestion and nutritional deficiency, weight loss is commonly seen in  disease. In disease, ashayapk rash is seen where pitta is normal but vata takes its place with low kapha dosha. And pitta is the outer element for the colon which causes burning sensation, when pitta increases it causes damage to vessels and causes inflammatory changes, when pitta displaces from its normal site then there is loss of pitta which leads to indigestion and weight loss.

Topical treatments are given

Ayurveda medicines help to treat the disease from its root and help in maintaining its proper health. Planet ayurveda is a natural brand which has been serving humanity for the last 20 years. All the medication prepared are pure and under strict ayurveda guidelines. These medicines are pure vegetarian and no animal products are used. Planet ayurveda provides best medications which reduces the risk of recurrence of disease and causes no side effects and the treatment is purely plant-based extracts. 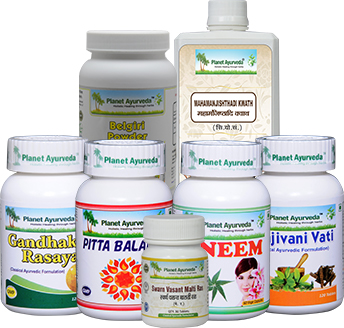 Mahamanjisthadi kwath is one of the famous ayurvedic medicines used in the form of liquids. It is one of the formulations of planet ayurveda which consists of manjistha (Rubia cordifolia), haritiki (Terminalia chebula),  bibhitaki (Terminalia belerica) and many  other ingredients. It is a natural detoxifier, used in many skin diseases. It has guru guna (heavy), rooksha (dry). Manjistha is tikta (bitter), kashaya (astringent) and katu (pungent) vipaka. This drug is useful in hypercholesterolemia and many skin disorders. It is useful in pitta vyadhi as it mitigates the pitta.

They are in the form of capsules which are single herbal in nature  and prepared using standardized extract of  neem (Azadirachta indica). These capsules are antimicrobial and have cleansing properties. Neem capsules also boost the immunity and prevent the overreaction of the immune system.The parts used in this are root bark, leaves and flowers. It is very effective in diabetes, and it helps to maintain blood sugar levels. Patients suffering from eczema must take a neem which causes healing.

Gandhak Rasayan is a polyherbal formulation formulated  by  planet ayurveda which contains gandhak (sulphur) as its prime ingredient. It is an immunity booster, which enhances the immunity and enhances the body strength and it provides good immunity and good digestion. Gandhak rasayan is beneficial in the upper respiratory tract, and helpful in treating acne and boils. It is helpful in detoxifying. It has antimicrobial, antiviral and many properties.This drug is a broad spectrum antibiotic.

Dosage: 1 tablet twice a day with lukewarm water after meals.

Swarn vasant malti ras is a classical herbo-mineral ayurvedic formulation which is prepared using ingredients such as swarna bhasma (gold calx), kali maricha (Piper nigrum), karpara (rasaka), loha bhasma (iron bhasma) and many more.  It helps in immunity booster and helps in healing problems such as fever, cough.  This formulation mainly balances kapha and vata doshas and is also helpful in tuberculosis, asthma. It balances kapha dosha and vata dosha.

Dosage: one tablet once or twice with honey or butter after meals.

Sanjeevani vati is a classical ayurvedic preparation used since ages for managing lots of health concerns. Ingredients like vidanga (Embelia ribes), ginger roots (Zinger officinale), pippali (Piper longum) and many others are used in preparing this amazing product. It is a very powerful formulation which cures aam (endotoxins) and balances doshas like vata and kapha, it helps the liver to eliminate the toxins out of the body. It has strong antipyretic properties and helps in flushing out toxins . Also known as amrit sanjivani. It increases digestive fire and burns out the fats, and it has antivenom properties.

Dosage: 1tablet twice or thrice with lukewarm water after meals.

Pitta Balance is one of the formulations of planet ayurveda which contains Jahar mohra pishti, Kaharava pishti, Akik pishti, Giloy satva (Tinospora cordifolia). If pitta doshas imbalances than main effect is on stomach and blood as pitta is associated with  blood disorders.To balance pitta one must consume ghee as it increases pitta and provides strength.To balance pitta we can have panchkarma treatment such as virechana which targets the small intestine and further balances the pitta dosha.Milk is useful in treating pitta dosha as it balances the acidity.

This formulation has great medicinal, spiritual meaning, it is a herbaceous plant and prepared by planet ayurveda which consists of bilva (Aegle marmelos). This medicine is useful in dysentery and many other gastrointestinal disorders. Bael shows anti-inflammatory activity, also helpful in skin soothing properties. This leaf of bael is offered mainly to lord shiva. It balances kapha and vata and has ushana dravya. This drug is light to digest and has a sweet taste.

In  disease it defined as the recurrent granulomatous inflammatory disease which affects the gastrointestinal structure from mouth to anus.But in metastatic  disease it is separated from gastrointestinal part.Here we discussed about the disease and its causes and signs where we later discussed about many herbs which is helpful in curing metastatic  disease. We discussed pitta balance, sanjeevani vati, belgiri churna and many more. These medications provide much relief to patients to a great extent. In case of any query regarding any health condition you can visit www.PlanetAyurveda.com