Mesalamine Or Mesalazine And Its Alternatives

Mesalamine comes under the class of medication that affects inflammation causing agents in the body that is responsible for tissue damage and diarrhea. It is a drug of choice for mild to moderate ulcerative colitis. It also helps in preventing recurrence of symptoms. Mesalamine is an agent which is derived from sulfasalazine which is an anti inflammatory agent. It may reduce inflammation through inhibition of cyclooxygenase and prostaglandin production. In this article we will discuss about mesalamine or mesalazine in detail including its working, side effects, symptoms of side effects along with its Ayurvedic alternatives.

Mesalamine or mesalazine are the official names given to 5- ASA after realizing that ASA is the active moiety in ulcerative colitis, but it is not effective orally because of its inability to reach the large bowel as it is absorbed in the small intestine. It has been prepared as the delayed release preparation by coating with acrylic polymer. A daily dose of 2.4g has been found to improve 50% patients of ulcerative colitis. Less than half of the 5-ASA released from these preparations is absorbed, acetylated in the liver and excreted in urine. Now let us discuss some important details about mesalamine and ulcerative colitis.

Ulcerative Colitis is a chronic inflammatory condition which is not having any clear etiology affecting the large bowel. Most commonly the large rectum extending proximally in a continuous fashion. The overall statement justifying pathophysiology of ulcerative colitis is the dysregulation of normally working immune systems against any antigenic trigger which hence leads to prolonged mucosal inflammatory response. The correct diagnosis of ulcerative colitis is generally made by combining the clinical features, tissue biopsy report and endoscopic appearance of mucosal ulcerations, friable, edematous and erythematous granular appearing mucus.

The overall incidence of ulcerative colitis ranges between 200-300 per 100,000 people. It can affect any age group however it is more common in the young generation and also has its prevalence equally in both sexes.

Working Of Mesalamine In Ulcerative Colitis

Mesalamine is believed to be the excellent first line therapy for treating mild to moderate ulcerative colitis and also help in maintaining remission. Mesalamine works by inhibiting or blocking the activity of cyclooxygenase and lipoxygenase and hence reduces the production of prostaglandins. Reduced production of the prostaglandins helps in decreasing the inflammation in the colon and also the symptoms associated with ulcerative colitis. Prostaglandin is locally acting vasodilator which sparks the healing process and it also stimulates the formation of blood clots. Prostaglandin is the reason for inflammation on the site where tissue damage takes place. It is also responsible for pain and bleeding.

Rare Side Effects Of Mesalamine

Inflammation around the heart,lupus like syndrome and impairment of blood cells.

Alternatives To Mesalamine In Ayurveda

Ayurveda is a very vast ancient science that is having many effective and wonderful herbs explained by various acharyas. Some of these herbs can act best to subside the symptoms occurring in ulcerative colitis and also treat the condition very effectively from root thus acting as an alternative to mesalamine. These herbs are very much potent reducing symptoms of ulcerative colitis like inflammation, bleeding and passage of mucus along with pain. Below discussed are some herbs and herbal extracts that can be potentially used in treating ulcerative colitis and can provide relief to the patient. 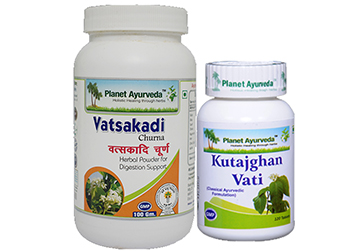 Kutaj (Holarrhena antidysenterica) belongs to Kutaja kula and Apocynaceae family. The english name for this herb is kurchi and in sanskrit it is called kutaja, shakra, vatsaka and koti. Conessine which is a steroid alkaloid found in apocynaceae family plants is having an antibacterial and anti inflammatory agent. In addition it also acts as an H3 receptor antagonist. In Ayurveda it is described that kutaja is having healing properties and is very well potential in pacifying pitta (whose imbalance is the reason for ulcerative colitis). It has ruksha guna, tikta and kashaya rasa along with katu vipaka. Kutaj Ghan Vati acts as a deepena herb which means it increases the diminished digestive fire and hence the mala (stool) comes in binded form rather than in loose form as this property makes this herb to behave as an antimotility drug. Thus reducing the frequency to pass motion in ulcerative colitis.

Vatsakadi Churna which is usually available in combination of 50% kutaja and 50% bilva. Kutja as mentioned above helps in reducing the motion frequency and on the other hand bilva is very effective in reducing the passage of mucus along with stool and also decreases the amount of bleeding with passage of stool. This formulation also reduces the bloating, intestinal irritation and pain. Bilva is having properties like anti microbial, anti bacterial and ulcer healing properties. This herb also shows preventing effects and thus protects the tissues from damage due to inflammation.

Dosage:- 1 teaspoonful twice daily with plain water after meal or you can boil the powder – 1 teaspoonful in 400 ml water, keep it boiling until it remains 50 ml. Strain it and drink the water. Leave the residue. Do it twice daily. Make fresh every time.

Drugs like mesalamine are the drug of choice in modern medicine but their adverse effects hit a person’s health really hard. If a patient present with any of the mild symptoms even then toxicity is to be considered and immediate cessation of mesalamine is to be done. On the other hand Ayurvedic herbs do not cause any kind of side effects and hence are quite safe to use. Patients can take it even for a long time and no toxicity will ever be noticed. In case of any query kindly visit www.planetayurveda.com

← Natural Cure For Radiculopathy
What is Gartner’s Cysts?- Causes, Symptoms, Tips and Treatment →