Gastrointestinal tract is the series of organs that are interlinked with a hollow tube which facilitates the movement of food and water through it. These hollow organs begin with the mouth, esophagus, stomach, small intestine, large intestine and end up in anus. There are specialized nerves cells (part of ANS) located in the walls of this digestive system that monitor the movement of food through the intestines. When there is mutation or alteration in the DNA of one of these cells, it gives rise to gastrointestinal stromal tumors. In this article we are going to discuss the GIST, its clinical features, possible causes, diagnosis along with best Ayurvedic management of the disease. 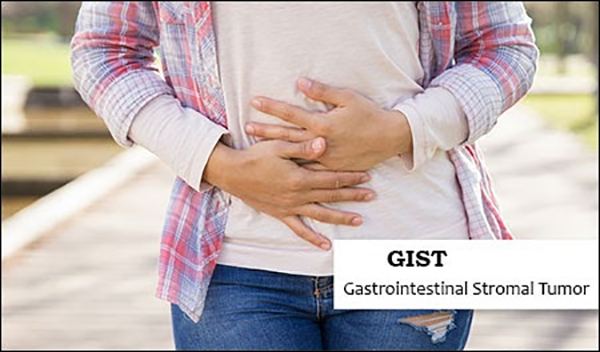 Gastrointestinal stromal tumors are the most common neoplasm of mesenchymal cells (connective tissue), that can be found anywhere in the gastrointestinal tract, but most commonly found in the stomach, rarely present in the small intestine and esophagus. These tumors involve both cancerous and benign forms. These tumors start to develop in interstitial cells of Cajal or similar cells. The interstitial cells of Cajal are normally part of ANS (Autonomic Nervous System) of the intestines and serve as a smooth muscle pacemaker that controls the motility of the GI tract.

The common clinical features of the GIST include difficulty in swallowing, bleeding from gastrointestinal tract, and metastasis of tumor mainly in the liver. Mucosal ulcerations can also be seen. There are rare chances of obstruction as most GISTs found to have an outward pattern of overgrowth. The patient usually presents with a history of abdominal discomfort and pain, there is a gradual increase in the size of tumor. Anaemia, nausea, vomiting, feeling of heaviness in the stomach, weight loss and chronic fatigue are also some of the associated symptoms.

GISTs are the tumors of connective tissue which is also known as sarcomas, but they are non-epithelial, unlike other gastrointestinal tumors. The gastric GISTs have lower tendency or potential to undergo malignant changes than the tumors found elsewhere in the gastrointestinal tract. The tumors that are smaller in size are commonly benign, mostly when there is slow cell division, and can remain within the bowel wall, appear as a mass or submucosal process in the intestinal wall on GIST imaging, but large tumors may presented with exophytic growth (i.e. may project outside the intestinal wall) and may disseminate or metastases to the liver, omentum and peritoneum. However, these can also metastasize to bone, lungs, pleura and retroperitoneum in rare cases.

These tumors are believed to have formed due to mutation predominantly in the c-KIT CD117 (i.e. Proto-Oncogene cKIT is the gene encoding for tyrosine kinase which is a receptor protein) gene, rarely caused by mutation in PDGFRA gene or BRAF kinase. There are very rare chances of hereditary familial transmission of this disease.

The diagnosis of these tumors involves imaging techniques such as CT-scanning. The final diagnosis can be made with the biopsy, which can be obtained on endoscopic examination. A simple abdominal X-ray may be present with radiopaque mass that is disturbing the shadow of gastric air. Barium meal study can also be performed; immunochemistry can be advised for making the definitive diagnosis of malignant cases.

In Ayurveda, the tumors are generally classified under a general heading of arbuda. Further this disease is a sarcoma, so its best correlation can be made with mansarbud. So, it is termed as Mahastrotasgat Mansarbud (the sarcoma of gastrointestinal tract).

This phrase states that due to history of trauma or any type of injury or any other possible causes will lead to the deformation in the muscle cells (stromal cells), which leads to their abnormal inflammation. This chronic swelling is usually painless, smooth, as the same color that of skin or stromal cells, non-suppurating and hard in tendency and is often fixed. This is caused mostly in excessive non- vegetarian food item consuming people due to the vitiation of their mans dhatu (body tissues associated with muscles and fats). This abnormal overgrowth of cells or tissues is termed as mansarbud (sarcoma).

Planet ayurveda is the globally leading ayurvedic clinic and manufacturing company that formulates herbal or herbomineral formulations with strict adherence to the ayurvedic texts. The products made here are 100% natural in origin and are being purified, processed and then formulated into herbal medicines under the strict surveillance and guidance of an expert team led by a group of experienced ayurvedic physicians. Further, the products made here are formulated with ancient time-tested formulas. 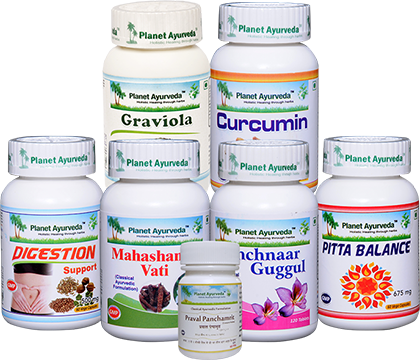 It contained the functional extract (curcumin) of Haridra (Curcuma longa). These capsules aid in growth of healthy cells. It also helps in boosting up the immune system of the body. Also the anti-proliferative effects of curcumin and its inhibitory action on NF-κB (transcription factor that controls the transcription of DNA), also helps in preventing the further proliferation of GISTs’ cells and thus preventing it from growing larger or metastasizing.

It is the classical remedy for treating abdominal discomforts. It is a poly herbomineral formulation available in tablet form. The ingredients of this formulation include Sankha bhasma (Clax of Conch shell), Sunthi (Zingiber officinale), Pippali (Piper longum) Shuddha Vatsanabha (detoxified Aconitum ferox), bark of tamarind, black salt and rock salt like herbs and minerals. It supports healthy digestion and metabolism. This formulation is very much beneficial in relieving pain and other gastric discomforts related to gastrointestinal stromal tumors.

It is another traditional polyherbal formulation which is very well known for its anti-inflammatory properties. The ingredients of this formulation are very effective in balancing tridosha. This tablet controls the abnormal growth of cells/tissue and simultaneously also supports the health cell/ tissue growth. The contents of this tablet include bark of Kanchnar (Boerhavia diffusa), along with Guggul (Commiphorma mukul) along with other herbal ingredients known for their detoxifying action on blood and cells of the body. This formulation as a whole is beneficial in both metastatic or benign form of GIST.

It is the formulation made on the suggestion of Planet Ayurveda’s expert team of Ayurvedic Physicians for the improvement of digestion in various agnimandya conditions (reduced digestive fire). In Ayurveda, the mandagni is considered as the basic cause of all the diseases, as it leads to the ama (endotoxins or free radical) formations that interface with normal cells metabolism and can lead to mutations and cause GIST like deformities. The digestion supports illuminates this reduced digestive fire again and pacifies and eliminates the free radicals and endotoxins, thus preventing further spread or slowing down the rate of proliferations in GISTs. The ingredients of these capsules include Haritaki (Terminalia chebula), Bhibhitaki (Terminalia bellerica), Amalaki (Emblica officinalis) and Pippali, Cumin, Coriander etc. It not only supports health digestion but also helps in abdominal pain, indigestion, nausea and appetite like associated symptoms of GIST.

Dosage– 2 capsule two times a day with water, after meals.

It contains the extract of herb Annona muricata. The properties of these herbs like anti-cancerous, antimutagenic, astringent and anti-inflammatory makes it useful for the condition of GIST. Graviola is very much effective against cancerous cells due to its phytochemical acetogenin.

It is the poly herbomineral formulation made by Planet Ayurveda. The ingredients of Pitta balance capsule include praval pishti, mukta pisthi, and kamdudha ras (Ayurvedic mineral preparations for maintaining good gut health) along with giloy satva (Tinospora cordifolia). These all maintain the balance of pitta dosha and boost the immune system to restrict or control; the growth of tumor cells. Thus, this capsule helps in the management of gastrointestinal stromal tumors.

It is one of the best polymineral classical Ayurvedic formulations made from the mineral ingredients like the purified calx of pearl, coral, pearl oyster and conch shell etc. These also promote digestion and help in managing the associated symptoms of GIST. Also this Praval Panchamrit Ras supports the control of abnormal overgrowth of cells.

Prevention is better than cure or in this case we can say that the timely management of the disease is very much necessary to prevent from its further associated complications such as malignancy. Ayurveda provides a best way to manage GIST (Gastrointestinal stromal tumors) through an integrated approach of herbal medicines along with dietary and lifestyle modifications.